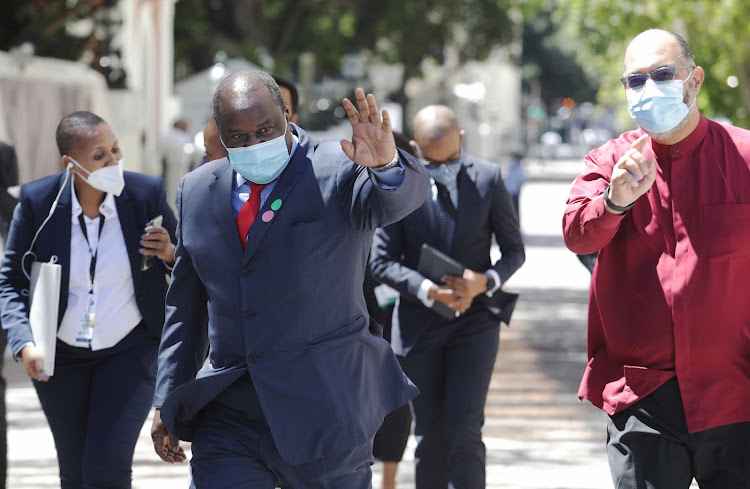 “It's an extraordinary budget, it kicks poor South Africans when they are down.”

It echoed the mixed reactions to the speech.

While some political parties represented in parliament welcomed funding for the vaccine rollout and commitments to arrest the country’s runaway debt by 2025, others criticised Mboweni, saying there was nothing in the budget that would lead to the fundamental changes that are required in South African economy.

Hill-Lewis said: “He speaks about a R10 increase for social grants. Actually if you look at the budget, the social grant budget is being cut for the first time ever. I have never seen that in parliament in 10 years. It's an extraordinary budget, it kicks poor South Africans when they are down.”

He said his biggest concern was that there was a lot that Mboweni did not include in his speech — like the detail of the budget. He thought it was “slightly dishonest” to leave this information out.

“Chief among those, we've got R4.3bn  — another bailout for SAA, we've got R31.7bn for Eskom and that was not even in the speech,” said Hill-Lewis.

He asked for prioritisation of social spending and making sure the cuts are focused elsewhere but “what we see is more bailouts, cuts to social grants, cuts to social services and I don't think that is morally defensible”.

The EFF’s Mbuyiseni Ndlozi said essentially there was nothing in the budget that was going to result in a transformation of the structure of SA’s economy [which is] chronic unemployment and the fact that there is no industrialisation happening.

He said even the promises to drive government expenditure to stimulate local industrialisation and local production were not new, and had been made over the years with nothing materialising.

Ndlozi said there were fundamental problems related to illicit financial flows that the budget said nothing about.

“I mean, you collect taxes from a very insignificant industry called tobacco; you leave the big mines, the big auditing firms,” he said.

“Corporate income tax was left as is. You should have gone for those guys, to collect more taxes from them, but to redirect these taxes to the type of economic activities or at least government expenditure that is going to lead to industrialisation and production activities to happen locally in the country.”

For the UDM's Nqabayomzi Kwankwa, the budget was uninspiring in that it sought to maintain the status quo rather than to get the SA economy out of the quagmire it finds itself in.

“The budget speech says absolutely nothing about how to reignite growth and how to create jobs.

R7bn set aside to bail out 'distressed' state-owned Land Bank

The government has prioritised the agricultural sector to stimulate economic growth and job creation as the industry emerged as one of few that ...
Politics
1 month ago

“It's maintaining the status quo, and an introduction of one or two proposals or programmes that they hope would be able to make an affect in terms of create jobs and making an affect on our economy,” he said.

Kwankwa complimented the government for maintaining expenditure on the social wage, but said they were not happy with the reduction of the corporate income rate at a time when it should be focusing on reducing the VAT rate from 15% to 14%.

“We must also compliment them for being able to not increase taxes this year - that is commendable.”

For the African Christian Democratic Party's Wayne Thring, Mboweni was in a difficult situation. But the party was still not impressed by his speech, saying it had warned as early as April last year that a hard lockdown would have negative consequences and that while saving lives, government had a responsibility for livelihoods.

“We feel vindicated when one looks at the economy,” said Thring. “We see debt to GDP growing up to 81.8%, unemployment has increased to 32% and 42% on the expanded definition. We have a budget deficit and it doesn't seem like we are going to be arresting our debt as debt to GDP is expected to grow to 88.9% in the next few years.”

GOOD's general secretary Brett Herron described it as a budget of hope and despair.

“There was some hope — the funding for the rollout of the Covid-19 vaccine is in there quite firmly.”

He hoped the R10bn would be sufficient to vaccinate 67% of the adult population this year.

He said more hope was in that there were no personal tax increases and instead the personal tax brackets were revised to bring some relief.

The despair was that Mboweni didn't meet his commitments from 2020.

All eyes were on Tito Mboweni on Wednesday as South Africans were looking forward to a growth-inspiring budget.
Politics
1 month ago

“My biggest disappointment is that the temporary social relief grant is being extended only until the end of April 2021,” said Herron.

Zungula would have loved it if Mboweni had prescribed that a percentage of the R800bn that has been allocated to infrastructure should go to black-owned companies which have been previously sidelined.

As expected, ANC treasurer-general Paul Mashatile said they welcomed the budget which was good given circumstances brought about by the Covid-19 pandemic.

“The fact that R10bn has been made available for the rollout of the vaccine is a good step ahead particularly because these resources will go to provinces and provincial health departments to be able to do that,” Mashatile said.

“We are of course going to ensure that we continue to be vigilant against any corrupt activities so that these resources can benefit the people that they are intended to.”

Mashatile said he saw the Daily Maverick story about allegations that associates of health minister Zweli Mkhize have benefited from Covid-19 relief funds.

“I haven’t really heard his side of the story so I’ll give him benefit of the doubt that there shouldn’t be anything we should worry about on the matter,” he said.

Mashatile said Mkhize would “definitely” be called to the ANC Luthuli House headquarters to explain himself.

Finance minister Tito Mboweni has stuck to his hard line on the salaries of public servants, proposing “moderate adjustments” to wage increases way ...
Politics
1 month ago

Finance minister Tito Mboweni has allocated R10.3bn to fund a massive vaccination programme to shield the entire population against Covid-19 in the ...
Politics
1 month ago

Finance minister Tito Mboweni will on Wednesday deliver his budget for 2021.
Politics
1 month ago
Next Article