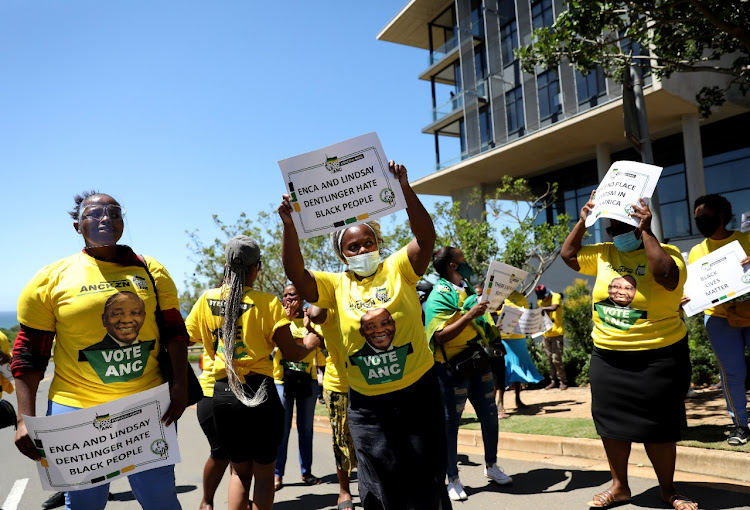 ANC members picket against eNCA after video footage of one of its journalists asking only black MPs to put their masks on during interviews went viral.
Image: Sandile Ndlovu

The ANC is demanding that eNCA explicitly apologise and demonstrate genuine remorse through practical antiracism steps within its organisation.

The party in KwaZulu-Natal on Tuesday picketed outside the 24-hour news channel in Durban as part of a national campaign against what it calls “systemic racism”.

“We, leaders and ordinary members of the ANC are enraged by the racist conduct of eNCA journalist Lindsay Dentlinger as well as the subsequent statement by eNCA management which defended and justified this offensive behaviour,” a memorandum read by provincial spokesperson Nhlakanipho Ntombela stated.

Jessie Duarte says eNCA must issue an unambiguous commitment to no longer tolerate racism within its ranks.
Politics
1 year ago

This comes after days of backlash against the broadcaster and its parliamentary reporter Lindsay Dentlinger.

Social media users have been up in arms after a news clip of Dentlinger asking UDM's Nqabayomzi Kwankwa to wear a mask during an interview while FF Plus leader Pieter Groenewald was interviewed mask-less. Other clips have also emerged of her asking black politicians to put on their masks, while not doing the same with white politicians.

ANC eThekwini and provincial leaders have arrived at eNCA Durban offices to what the party believes is racism. This follows reporter, Lindsay Dentlinger's failure to ask white interviewee to don a mask while black ones were asked to wear one #eNCA pic.twitter.com/d39gxm5Q3N

eNCA MD John Bailey said “criticism to this extent levelled at a journalist under these circumstances is unfair and unfortunate, comments and some video content being shared is maliciously misleading”.

However, the ANC is not convinced that the broadcaster accepted accountability and called the comment “offensive”. Instead, the party, “on behalf of all patriots who value equality and nonracialism”, demanded that eNCA withdraw the offensive statement in which they “defended” Dentlinger.

“eNCA to send an unconditional apology to all South Africans for the pain and hurt that Dentlinger and eNCA have caused, to send its journalists and management to human rights training to learn the values of equality and nonracialism.”

Ntombela also accused the broadcaster of historically creating working conditions that discriminate against black journalists including hiring a “failed politician”, Kanthan Pillay, as its news director.

He cited two incidents of journalists where one was “frogmarched” out of the eNCA building by Pillay after he had resigned on the same day, later calling him a “rat”.

Another was an incident where a journalist was suspended by Pillay for live tweeting the EFF national conference despite the TV station pulling out of the conference.

Pillay, through his ZACP Capitalist Party of SA — whose logo was a purple cow — contested the 2019 elections achieving more than 12,000 votes and falling short of attaining any parliamentary seats.

While the station fired Pillay, Ntombela said racism is endemic at eNCA and demanded that eNCA also “publicly acknowledge its history of mistreating its black journalists, some of whom have been forced out by the racially intolerable conditions at eNCA”.

An office manager received the memorandum on behalf of eNCA.

eNCA head of news Kanthan Pillay has been fired - but the station said it would nonetheless be probing claims of censorship made against him.
News
2 years ago

Mampara of the week: Kanthan Pillay

ENCA has some important questions to answer about how and why it put the ex-leader of a herd of purple cows in charge of its news kraal, especially ...
Opinion & Analysis
2 years ago