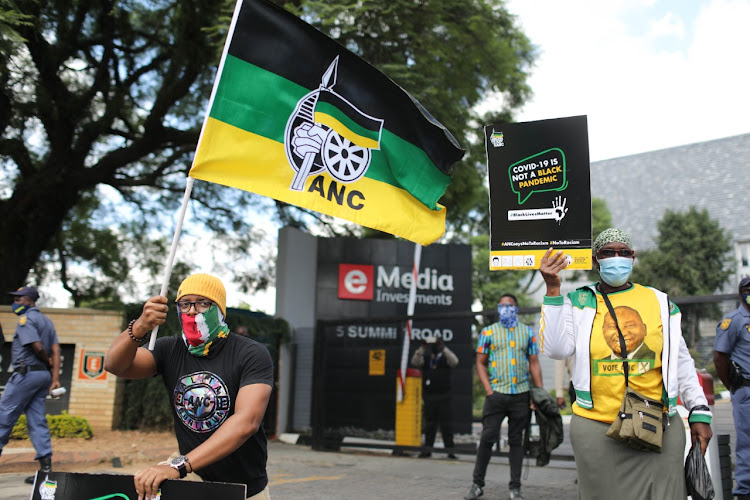 The ANC wants eNCA to commit to a transformation process that will include sending its journalists and managers on human rights training.

The party also wants the broadcaster to apologise and withdraw its statement defending a journalist who is under fire for alleged racism in how she conducts interviews.

This was contained in a memorandum the ANC handed over to eNCA during an antiracism march in which hundreds of party members descended on the broadcaster’s headquarters in Hyde Park, Johannesburg, on Tuesday. The march, led by ANC deputy secretary-general Jessie Duarte and NEC member Nomvula Mokonyane, came after eNCA parliamentary journalist Lindsay Dentlinger was accused of racism for demanding that black interviewees wear face masks while letting their white counterparts speak without their masks.

The ANC said this was unacceptable and pointed to racist behaviour. The party  has given the broadcaster seven days to respond to its demands, which include:

The UDM has approached the SA Human Rights Commission to lay a complaint against Dentlinger.

The ANC is demanding that eNCA explicitly apologise and demonstrate genuine remorse through practical antiracism steps within its organisation.
Politics
1 year ago

Dentlinger has since apologised for the incidents, saying the circulating clips happened over a period of time between October 2020 and last week during the budget speech.

“So those are four very different occasions, they don’t even happen at the same place,” she said.

She said she was not racist and that it was an oversight that she did not ask Freedom Front Plus leader Pieter Groenewald to wear his mask during their interview.

“I totally acknowledge the outrage. I apologise for the disrespect that it has caused to people who don’t deserve to be drawn into this,” Dentlinger said on eNCA on Sunday. She said the incident showed that SA and its newsrooms need to have a dialogue on race “and how people are portrayed in the media”.

Speaking at the march, Duarte said the party acknowledged Dentlinger’s apology but the incident showed there were fundamental issues with her actions.

“Sometimes we don’t believe that we are racist but it’s deep-rooted and what we observed was that this young lady, she apologised yesterday on television but doesn’t accept that there is something fundamentally wrong in what she did,” said Duarte. “And the fundamental wrong is you cannot interview three black men in a row and you ask them to wear a mask and you interview four white men and you don’t, and they take off their masks and she doesn’t see that as a problem. Neither did eNCA see it as a problem and we worry that they did not immediately take the matter up and apologise and say ‘we’re going to fix this’.”

Duarte said the party held 53 antiracism pickets across the country on Monday.

She said the response by eNCA defending Dentlinger’s actions was not enough and it was also “callous”.

“We are extremely disappointed with your response to what the whole world saw over and over again where a person that is in your employ, not only once, twice, three times and on other occasions as well interviews a black person and says put your mask on and cover your nose but when they interview a white it’s OK because corona[virus] is a black person’s disease and that is the attitude of your management, unfortunately,” Duarte said in handing over the memorandum.

eNCA MD Norman Munzhelele, who accepted the memorandum, said they committed themselves to helping to build a non-racial society.

“We will do everything possible within our powers at eNCA to ensure that we transform, to ensure that our journalists, our management are aware of racial issues of the country,” he said.

"I have never been a fan of the name given to the sociological phenomenon known as unconscious or implicit racial bias," writes Lindiwe Mazibuko.
Opinion & Analysis
1 year ago

The company said it had elected to use a black person in the advertisement as black people make up 80% of the South African population.
News
1 year ago