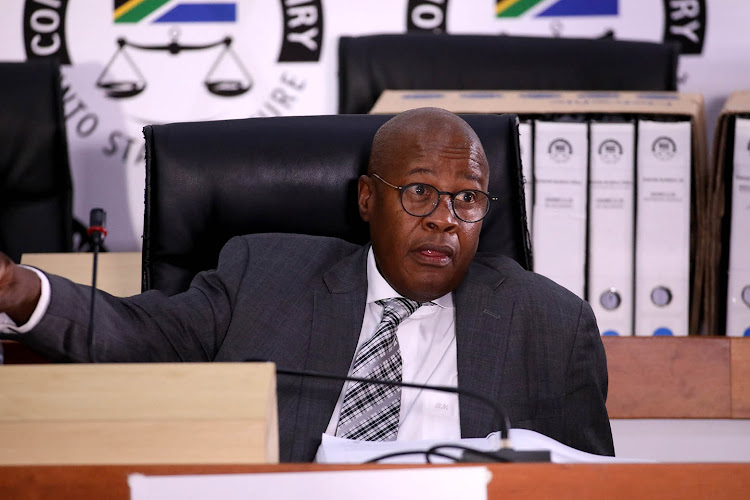 One would have thought former Eskom boss Brian Molefe would never want to be seen carrying the now-infamous brown leather backpack in public. But Molefe is seemingly not about to let go of his favourite bag, regardless of what it has become known for.

The bag in question, according to one of Molefe’s former protectors during his tenure as CEO at Transnet, was once discovered in the CEO’s office full of R200 notes of alleged Gupta cash.

This evidence was led last year, but Molefe showed up on Tuesday at the state capture inquiry that heard the allegations about some of the functions for which the bag was used.

A former bodyguard to former Transnet CEO Brian Molefe told the state capture inquiry how he once found a backpack belonging to Molefe, half-full ...
Politics
1 year ago

Molefe entered the Old Joburg Council Chambers in Braamfontein in high spirits minutes before 10am on Tuesday. Clad in a grey suit, white shirt and grey and white tie, Molefe seemed to almost bounce in, with his hands tucked in his pockets as though he was a random guy walking the streets.

Confident, Molefe greeted every commission staffer he came across on the way to the witness box.

Five minutes before the 10am official starting time of the hearing, Molefe settled comfortably in the hot seat and took final instructions from his legal team, led by senior counsel advocate Thabani Masuku.

The inquiry registrar shouted “all rise” when the inquiry chairperson, deputy chief justice Raymond Zondo, emerged from his chambers to assume his position in what used to be the chair of the council speaker.

Evidence leader advocate Pule Seleka recapped from Molefe’s previous testimony before picking up from where it left off. However, he failed to mention the highlight of that first appearance, namely the implication of President Cyril Ramaphosa, and Molefe made sure to remind the inquiry.

“Just as we are recapping, I want to remind the chairperson that I made a statement making substantive allegations to the extent that Glencore had been trying to extort R8bn from Eskom,” Molefe said as he fired his first salvo.

“The current president [Ramaphosa] had been made a shareholder in Optimum. Glencore and Optimum are at the centre of what happened at Eskom. I am saying this now because while we were recapping this was not mentioned. I hope that it is not being swept under the carpet and conveniently being forgotten.”

"I hope that it is not being swept under the carpet and being forgotten conveniently," Molefe told the state capture inquiry on Tuesday.
Politics
10 months ago

Molefe was questioned about why he collapsed negotiations for a new coal supply agreement with Optimum Coal Mine in mid-2015, just months after his arrival at the power utility in April.

Molefe insisted the company, owned by controversial multinational Glencore, was negotiating in bad faith and using strong-arm tactics to disadvantage Eskom. He told the inquiry that he wanted to represent the interests of Eskom, and he believed he did this with aplomb. Optimum was sent packing until they sold the mine to Gupta-owned Tegeta in December 2015.

The inquiry was interested to hear Molefe’s version about another mining company, Exxaro, which made a similar claim to that of Optimum — that being it was “elbowed out” of Eskom by Molefe to lay the ground for the same Gupta company.

For Molefe, those versions do not mean anything. His side of the story is that Optimum and Exxaro were part of “a few white companies who controlled coal supply to squeeze Eskom” and he stopped them.

On the penalties claim against Optimum by Eskom, Molefe was resolute that the power utility was well within its rights to demand what was due. Optimum had apparently been fined over a period for delivering coal that was not in line with the specifications of their contract.

That bill of penalties, which Eskom failed to collect, had accumulated to R2.1bn at the time Molefe joined Eskom.

At 5pm the proceedings were put on hold, to be continued on Wednesday morning.

“Is that not the bag that allegedly has stashes of Gupta money?” I joked with him while he walked out of the building.

“You spotted it well. Imagine me bringing that money to the commission,” Molefe responded with a chuckle.

Did former Eskom board chair Zola Tsotsi lie to the Zondo commission?

In his affidavit, former Eskom board chair Zola Tsotsi claimed he “quietly ignored” a list of the composition of board committees sent to him by ...
Politics
10 months ago