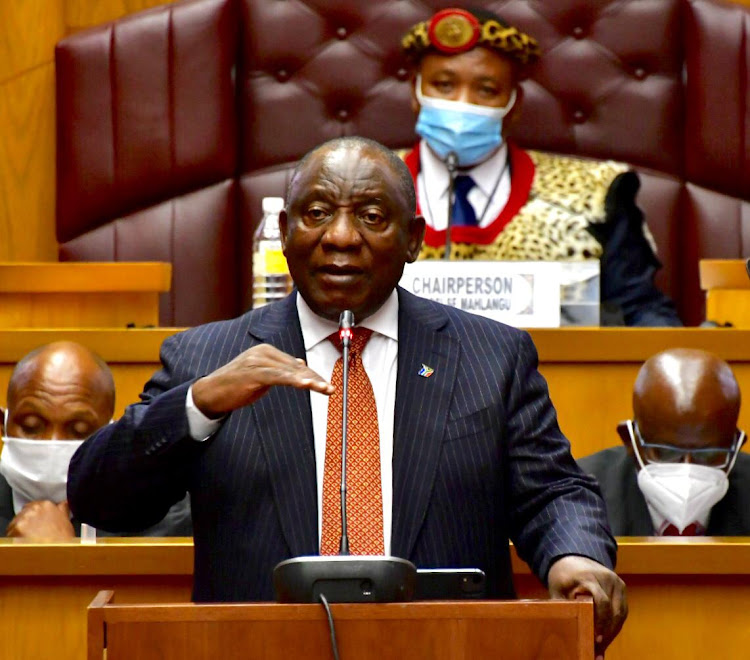 President Cyril Ramaphosa on Thursday received a tongue lashing from traditional leaders during the debate of his recent state of the nation address in parliament.

Members of the National House of Traditional Leaders also debated a speech Ramaphosa delivered last Thursday during the annual official opening of the house.

House deputy chairperson Nkosikazi Nosandi Mhlauli told Ramaphosa that traditional leaders were not interested in merely being listened to, but wanted to see action after that engagement.

“We cannot continue with unfulfilled promises by our government. This is making us to be leaders who do not tell the truth. There were task teams established in 2018 to take the resolutions of 2017 forward, traditional leaders played their part, but government is still stalling even today,” he said.

Mhlauli lambasted Ramaphosa for not making various ministers account or report to the house.

She said the issue of land remained a challenge for traditional leaders.

“Some of the issues you presented were not entire correct ... Everything that you said was something that could be termed as a report of the house and we expected guidance on how the government sees us moving forward as a sector.

“We feel that in future, Mr President, you need to give directions. We expect your speech to give marching orders and then take stock in the end on whether we have achieved what we said we were going to do and, if not, how we are going to achieve that?”

Traditional leaders agreed to suspend initiation when the pandemic was at its peak.
Politics
10 months ago

Most concerning, he said, were issues affecting people living in rural areas — issues which had not been addressed.

“We are now dealing with Covid-19. It cannot be correct that our areas are always left out when it comes to development. In our last debate there was a willingness to create an infrastructure development fund. We expected that it was something that could have been followed up but, at this stage, it has not been followed up.

“Our plea is let us stick to the rules. If the president addresses this house he must come with policy directives so that we can have direction ... It cannot be that the people in the rural areas are the ones who are always poorer, under-serviced and underdeveloped. We are always saying use us, we are here, unless it is true what they are saying that the government wants to get rid of us,” said Pilane.

The National Khoisan Council’s Cecil le Fleur welcomed, with caution, the Traditional and Khoisan Leadership Act which will come into effect on April 1.

“The information received from our traditional leader’s colleagues is not a good one as some provinces do not budget or allocate budget to traditional councils. It will not help the purpose if structures are established and not funded.”

Chairperson of the National House of Traditional Leaders, Inkosi Sipho Mahlangu, said Ramaphosa needed to consider the traditional leaders’ request for the date for the Presidential Land Summit.

“We need the amendment of the constitution to provide for expropriation of land without compensation, that the 87% of land which is in the hands of government, churches and private sector. However, food production should not be compromised.”

Mahlangu said adequate support should be given to the structures of traditional leadership which includes issues of tools of trade, like budget.

“Provide support and increase co-operation between government and traditional leaders for the development of rural communities as well as amend the constitution so as to provide for the powers and functions of traditional leaders as per the discussions held from 1998 to 2003.”

The full-time status of members of the houses of traditional leaders needed to be considered.

The Traditional and Khoi-San Leadership Act will come into effect from April 1 - a significant milestone, the president said on Thursday.
Politics
10 months ago

Leaders also want a detailed plan of action for the implementation of the Traditional and Khoisan Leadership Act to be tabled.

“The president needs to encourage our deputy minister to arrange a round table discussion with all deputy ministers of the economic cluster to receive and discuss the Invest Rural approach before tabling it to the ministers.”

In response, in acknowledging their concerns, Ramaphosa said it was the responsibility of the government to create an enabling environment in which traditional leaders could play their role in their communities.

Ramaphosa said the country was emerging from the worst crisis in modern times.

“The [Covid-19] pandemic has highlighted once again the vast disparities between urban and rural dwellers with regards to health care, basic services and social support.”

Ramaphosa said it was everyone’s responsibility to drive the economic reconstruction and recovery plan announced in October last year.

“As has been articulated in this house today, traditional leaders must not be bystanders to this process. Nothing must take place about you, without you. Nobody must be left behind.”

He urged traditional leaders to be deeply involved in the implementation of the District Development Model.

“This is an integrated approach that seeks to ensure the development of different areas in our country, urban and rural, with all key role players working together. I am concerned by the reports presented here that there are areas where traditional leaders have not been included in this process.”

He told traditional leaders that they had the responsibility to bridge the urban-rural divide which was perpetuating inequalities in society.

“There is not a single traditional leader in this house who is not aware of the crisis in their communities caused by mass migration to the cities. Our rural areas must become centres of economic activity, of industry and of employment opportunity. As a number of speakers in this debate have said, our rural communities want to be self-sufficient. As traditional leaders you understand the aspirations of our people to do things for themselves.”

He said the government has prioritised rural infrastructure development to make these areas attractive for investment.

“Our economic recovery must also involve the development of local production and industrialisation. This must happen in rural and underdeveloped areas if it is going to benefit all South Africans.”

For SA to achieve its rural development goals, Ramaphosa said, rural communities needed to have land and must have the resources and capabilities to work this land.

“We applaud those traditional leaders who have been supporting land restitution and redistribution. Since 2018 about 1.5 million hectares of communal land has been availed by traditional leaders and I want to call on you to work with the department to avail more land for development and beneficiation.”

Contralesa blasts police over shooting of Mthokozisi Ntumba in Joburg

"Mr President, I think the country wants to hear what is it this government is going to do," Contralesa president Kgosi Mathupa Mokoena said on ...
Politics
10 months ago

He said the Department of Agriculture, Land Reform and Rural Development and Cogta recently entered into a memorandum of understanding to ensure that the land that has been availed by traditional leaders is cultivated and worked on for agricultural and farming production.

“I acknowledge the concerns expressed by a number of speakers about the urgency of holding the Presidential Land Summit,” said Ramaphosa, assuring leaders that a date for the summit would be announced — and that Deputy President David Mabuza would make sure that the summit takes place.

The president said the issue raised by Prince Mangosuthu Buthelezi on the powers and functions of traditional leaders was a fundamental one.

“Prince Buthelezi has been a consistent voice on these issues, and I wish to thank him for the forthright manner in which he has raised the views of traditional leaders.

“It is true that this matter has remained unresolved for many years, and it is equally true that the finalisation of this matter will enable progress on several challenges that have been identified in this debate and more broadly.”

With regards to the Traditional Courts Bill, Ramaphosa said that the portfolio committee on justice and correctional services had requested a legal opinion on its constitutionality.

“It is critical that these matters are resolved to align the functioning of traditional courts with our constitutional values,” he said.

On the Traditional and Khoisan Leadership Act which comes into effect next month, he said the government would attend to issues of appointing a commission on Khoi-San matters as required by the act.

On the call for ministers to also report to the house, Ramaphosa said perhaps the engagement should last two days to allow certain ministers to address issues raised by traditional leaders.