The National Assembly voted on Tuesday for the establishment of a special committee to inquire into Mkhwebane's competence, with 275 MPs voting in support, 40 MPs voting against, and one abstaining 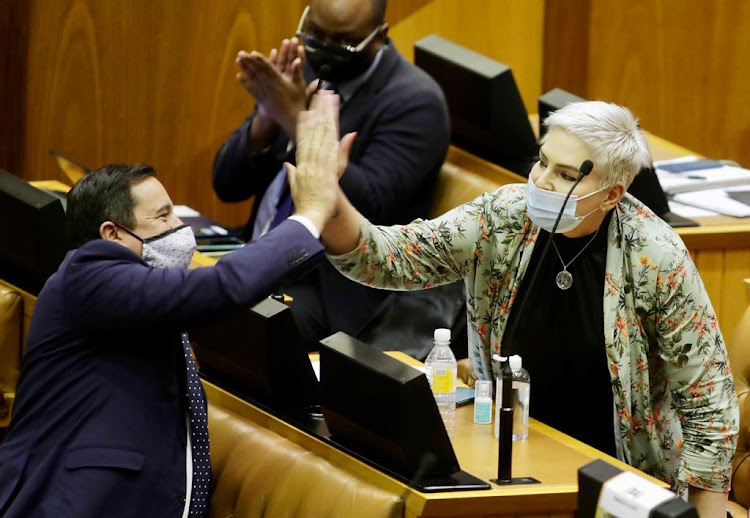 Public protector Busisiwe Mkhwebane will become the first head of a Chapter 9 institution to face an inquiry into her fitness to hold office.

The National Assembly voted on Tuesday for the establishment of a special committee to inquire into her competence, with 275 MPs voting in support, 40 MPs voting against, and one abstaining.

The majority of the “for” votes came from the ANC and the DA.

Four of the 14 political parties represented in parliament — the EFF, UDM, African Transformation Movement and Al Jamah — objected to the process going ahead. The PAC and African Independent Congress were absent.

This follows a finding by an independent panel that there is enough prima facie evidence of incompetence and misconduct against Mkhwebane and that parliament should probe her competence as public protector. The three-member panel was chaired by retired Constitutional Court justice Bess Nkabinde.

ANC chairperson Gwede Mantashe instructed ANC MPs to toe the line and vote in support of an inquiry into public protector Busisiwe Mkhwebane’s ...
Politics
4 months ago

In terms of the process, the panel’s report has to be placed before the house for consideration. The National Assembly was required to decide whether it agrees with the report and whether an inquiry by a parliamentary committee should be held. This decision required a simple majority — the support of 201 MPs.

In the build-up to Tuesday’s vote, ANC secretary-general Ace Magashule and a number of ANC MPs voiced their opposition to a process to impeach Mkhwebane, with Magashule saying principled ANC members could not vote with “the enemy”, a reference to the DA.

Mazzone said Mkhwebane had time and again demonstrated an inability to conduct her work independently. She questioned the public protector’s understanding of law and her mandate.

The panel cited repeated errors including:

“This suggests an inability to learn from mistakes by adopting a more careful approach,” reads the report.

During the debate and subsequent vote on Tuesday, the drama promised by some ANC MPs did not materialise, as 168 of them voted with the DA for the establishment of the inquiry.

You could hear a pin drop when speaker Thandi Modise, who presided over the session, asked if there were any MPs who wanted to vote differently to what their party whips had presented to the house. None responded.

In the build-up to Tuesday's vote, some ANC MPs indicated to the media, and in letters to Magashule, that as a matter of principle they would not vote with the DA and would object to any instruction in this regard.

But in a caucus meeting an hour before Tuesday's sitting, ANC national chairperson Gwede Mantashe gave the line — and all present ANC MPs simply toed it.

Mazzone suggested that parliament could not ignore the findings of the independent panel that there was prima facie evidence against Mkhwebane. She described the members of the panel as “the finest legal brains in the country”.

The EFF disagreed, and has threatened to take parliament to court over the process it followed.

EFF MP Natasha Ntlangwini said Mkhwebane was being persecuted because she is black and because of the people she investigated. She said even the rules were drafted to target Mkhwebane.

“We do this from a legal principle point of view. This house has never had rules to give effect to section 194 of the constitution. These rules were developed in 2019, and as a general rule, our law doesn't apply retrospectively. Our law is forward-thinking.

“On what basis would a person be tried under rules that were adopted after the fact?” she said. Ntlangwini said the rules which enabled the appointment of an independent panel were therefore made with Mkhwebane in mind.

“The end goal was created — a watertight method to remove the public protector from office and no-one else,” she said.

Ntlangwini repeated a claim once made by Mkhwebane when she compared the rules to remove heads of Chapter 9 to the “Sobukwe clause”, which was a law specifically drafted by the apartheid government to keep PAC leader Robert Sobukwe imprisoned indefinitely.

Section 194 (3) (a) of the constitution provides for the president to suspend a head of a chapter 9 institution from office at any time after the start of the proceedings of a committee of the National Assembly for the removal of that person.

“This is what we will enable if we allow this process to continue. This is without a doubt unconstitutional persecution of a black woman whose only sin was to demand accountability from the poster boy of white monopoly capital.

“If this motion passes, we will immediately approach the courts to stop this process from taking any shape or form and expose the ANC who are complicit in persecuting of the public protector.

“If it was Marthinus van Schalkwyk, Groenewald or Mazzone, the process would have been different but because her skin is black, now all of a sudden rules and independent panel must be established because she is black. We will take you to court,” Ntlangwini said.

The IFP's Narend Singh warned that parliament should ensure a fair process where Mkhwebane will be provided with fair opportunity to substantively respond to the allegations made against her.

“Allegations remain of prima facie nature until tested and subjected to a due process including the principle of Audi Alteram Partem [Latin for hear the other side],” he said.

The National Freedom Party, while it supported the inquiry, expressed its concern that parliament may not be acting within the law, considering that there was a matter pending before the court.

Like the EFF, the UDM objected to the inquiry, with leader Bantu Holomisa saying that if anyone should be removed from office, it was the current ANC executive.

The ATM's Thandiswa Marawu reiterated the party's call to Modise to suspend the discussion of the independent panel's report, in light of the sub judice rule given the ongoing legal matter. She warned that parliament would become a constitutional delinquent if it went ahead with the impeachment before the court process is concluded.

The ANCs Doris Dlakude said the legislature was guided by rules which were in line with the constitution.

Dlakude expressed the ANC's support for the motion to establish the multiparty committee which will deal with the matter, and which will afford the public protector an opportunity to make a representation.

Dlakude said it was not fair that the public protector was walking around with a dark cloud hanging over her head.

“She must make a representation to the committee and then the report of the committee will be presented to the house for a decision,” she said.

The Constitutional Court has dismissed public protector Busisiwe Mkhwebane's application for leave to appeal against a Western Cape High Court ...
News
4 months ago

Supra cross: ‘I will NOT vote for DA motion in the form of a panel report’

ANC MP Supra Mahumapelo says unless the party has changed tack, he will not support the Mkhwebane motion
Politics
4 months ago

Some ANC MPs are rebelling against a position communicated by party chief whip Pemmy Majodina that the caucus has decided to support a committee to ...
News
4 months ago