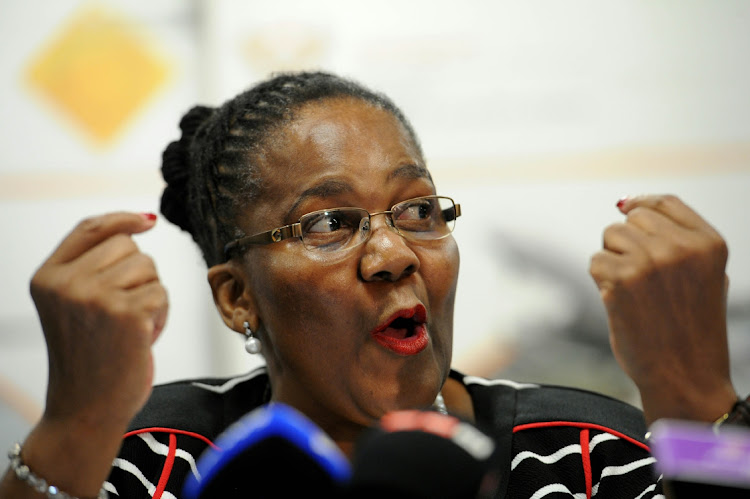 Former minister Dipuo Peters failed to appoint a permanent CEO for Prasa despite a recommendation by the board to do so — but said she had no regrets.

She also fired the Prasa board weeks before she was sacked, but for that, too, Peters is standing her ground.

In fact, on her removal of the Prasa board in March 2017, Peters believes it should have been done in 2016.

If the commission is of the view that Peters' decisions on both the appointment of the CEO and the sacking of the board were ill-advised and irrational, as per proposition by evidence leader advocate Vas Soni SC, then let her be nailed to the cross, she said.

Peters was concluding her testimony at the state capture commission on Wednesday.

She was mainly grilled on her decision to dismiss the Prasa board that was led by Popo Molefe on March 8 2017.

At the time, Peters would be axed as minister three weeks later by then trigger-happy and scandal-prone president Jacob Zuma.

This, according to evidence leader Soni, makes Peters' decision appear as one she took under pressure.

What makes her story more unbelievable, Soni argued, was that Peters fired the board that had only three months left in office.

And for this, Soni will submit to commission chairperson, deputy chief justice Raymond Zondo, that Peters was not a “candid” witness on the two issues.

Peters insisted that the Molefe-led board had become a source of constant headaches and a day longer with them in office would have sent her straight to a mental facility.

“Chairperson, with my experience, I know that one day, one week or one month is very long in government and a lot can happen,” she said. “If it is in the understanding of the commission that I was wrong, then I concede but there is a stage where one has to say do I allow what has been damaged to be damaged further.

“The public spats (between Molefe and ex-Prasa CEO Lucky Montana) created an environment that as a minister, with the other things I was dealing with, I thought up to so far and no further.”

Soni insisted that Peters was not telling the whole truth.

Peters concluded by emphatically stating that all her decisions that related to Prasa were not sponsored anywhere, adding that as she was a “big girl” who “takes responsibility for my actions”.

For her failure to appoint a CEO for Prasa for more than a year after a recommendation by the board, Peters repeated her previous testimony that the company was “not ready” at the time to have a full-time boss.

Zondo found this logic problematic because it was “like saying when somebody is very sick, instead of taking them to hospital or calling a doctor, you say let people who are not doctors look into them”.

The commission will on Thursday hear Eskom-related evidence from former CFO Anoj Singh.

Peters, Molefe and Montana are all pointing fingers at each other with regards to the Prasa CEO debacle
Politics
11 months ago

Prasa board chaired by Popo Molefe should have been axed earlier, Dipuo Peters tells Zondo commission

The Prasa board led by Popo Molefe disrespected former transport minister Dipuo Peters as they did not respond to any correspondence, she told the ...
Politics
11 months ago