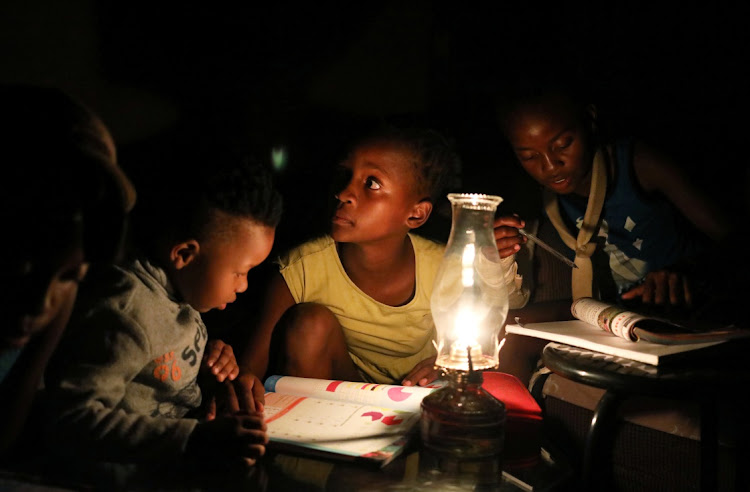 Children use a paraffin lamp to study during load-shedding in Soweto this month.
Image: SIPHIWE SIBEKO / Reuters

President Cyril Ramaphosa has urged South Africans to play their role in improving energy security by continuing to pay for the electricity they use in their households, businesses, industries or municipalities.

In his weekly newsletter, Ramaphosa reassured the country that the government was working tirelessly to find an alternative power supply to alleviate the strain on Eskom.

For more than a week in the month of March, SA had to endure power disruptions after Eskom announced that its power system was constrained.

Ramaphosa said: “Resolving our energy challenges isn’t just urgent, it is fundamental to SA’s economic recovery. That is why we are making every effort to bring new power generation capacity online in the shortest possible time.”

The minister of mineral resources and energy Gwede Mantashe last week announced operators that were chosen to supply 2,000MW to the country.

This project is going to be constructed over an 18-month period and is expected to be up and running by August 2022.

The department also opened bidding for proposals for independent power producers to supply a further 2,600MW of renewable energy.

This, Ramaphosa said, was a programme that had led to huge private investment in SA’s energy infrastructure, and was an important part of the government's commitment to move towards cleaner energy sources.

The government said it was also looking into making it easier for businesses to provide their own electricity.

The department of mineral resources & energy and energy is expected to release a further four requests for proposals for new power generation projects. The bidding is expected to take place over the course of next year. The president said the projects will provide over 7,000 megawatts of power.

Ramaphosa urged South Africans to do their part to help improve the situation.

“While Eskom works to improve its operational performance and new generation capacity is being built, there is much that we can each do to improve the situation.

“Beyond the free basic electricity that government provides, we need to make sure that all of us pay for the electricity we use, whether as individuals, households, businesses, industries or municipalities.

“Illegal connections, meter tampering and the illegal sale of prepaid electricity vouchers make it much harder for Eskom and municipal power utilities to improve their infrastructure and even to continue to provide electricity.”

Most of the coal power stations are over 40 years old and often experience breakdowns.

Maintenance on these plants, Ramaphosa said, was neglected for many years.

Eskom estimates that breakdowns consume as much as a fifth of SA's electricity capacity.

“Better maintenance will lead to improved plant performance in the medium term and to greater stability in supply.”

Load-shedding to be halted

Eskom said teams had successfully returned to service a generation unit each at the Duvha, Medupi, Kendal, Kriel and Kusile power stations.
News
1 month ago

The power utility said it suffered further breakdowns at five power stations during the weekend.
News
2 months ago

Eskom announced on Sunday that it has extended load-shedding to Wednesday due to constrained generation capacity.
News
2 months ago
Next Article