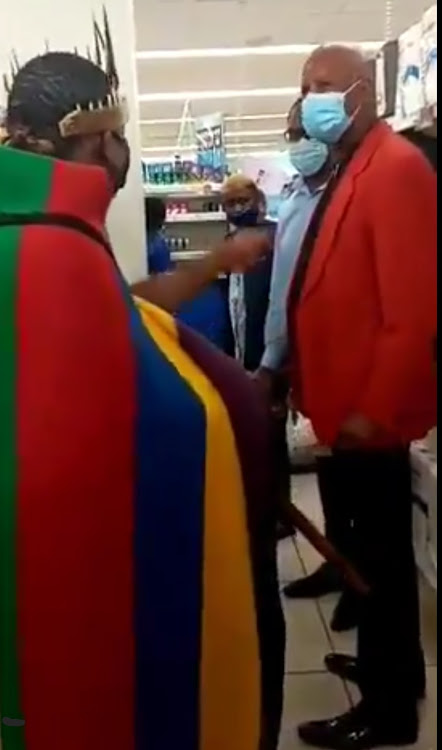 The National House of Traditional Leaders has laid formal complaints against the conduct of a manager at a Midrand shopping centre who intervened when customers complained that a man's underwear 'indecently exposed him'.
Image: Screenshot

The National House of Traditional Leaders has lodged formal complaints with the CRL Rights Commission, the SA Human Rights Commission, management of Boulders Shopping Centre in Midrand and Clicks over a man wearing traditional Ndebele attire being asked to leave a shopping centre.

A video clip that went viral depicted the centre manager instructing Thando Mahlangu to leave because of the way he was dressed.

Retailer Clicks issued a statement, distancing itself from the incident and said it would lay a formal complaint with the centre. Clicks said they had intervened and allowed Mahlangu to do his shopping in their store.

“We are extremely embarrassed by the centre manager's behaviour and will be putting in a formal complaint,” Clicks said in a statement.

The National House of Traditional Leaders said that as custodians of cultures, customs and values, traditional leaders believed that shopping complexes and other public institutions should always seek to accommodate and promote tolerance in respect of cultural diversity as enjoined by the constitution.

“SA is a multicultural and multiracial society, hence we advocate for the respect of all cultures,” it said in a statement.

They condemned the incident and were dismayed, rejecting any form of encroachment by individuals or institutions on the cultural practices and beliefs of Africans.

“Any form of prejudice, particularly in respect of African cultures, is an antithesis of our founding tenets as a constitutional democracy and must be condemned with the abhorrence it deserves.

“South Africans needed to stand united in their diversity and defend the principle of a rainbow nation as advocated by the late former President Nelson Mandela.

A Midrand mall manager who humiliated Ndebele activist and author Thando Mahlangu by hounding him out of a shop over his traditional attire has been ...
News
10 months ago

“As a people, we must be proponents of both cultural and religious tolerance to promote coexistence as well as our uniqueness that anchors on our diversity. We urge relevant Chapter 9 Institutions and other authorities to probe the incident thoroughly and prosecute where possible.”

The centre's management apologised for how Mahlangu was treated and said customers had complained that he was dressed indecently.

“The centre would like to clarify that it does not deny entry based on appearances and clothes. It is unfortunate that the incident that occurred inside Clicks is being viewed as intolerant towards other cultures and clothes,” it said in a statement.

“We would like to state that based on various complaints received from shoppers the person in question was asked to leave the store as his underwear indecently exposed him. We neither had nor have any intentions of hurting or discriminating against anyone on the basis of their cultural beliefs and practices.

“The exchange in the video does not represent the core beliefs and values of the centre.

“We take this opportunity to once again apologise to those who feel hurt by the incident. The decision was taken in the interests of other shoppers and employees of the mall.”

Ndebele activist and author Thando Mahlangu was allegedly hounded out of a Midrand mall because he was dressed in traditional Ndebele attire.
News
10 months ago

Pharmacy chain Clicks said it was left 'embarrassed' by the actions of a Boulders Shopping Centre manager, and that its own store manager had to step ...
News
10 months ago