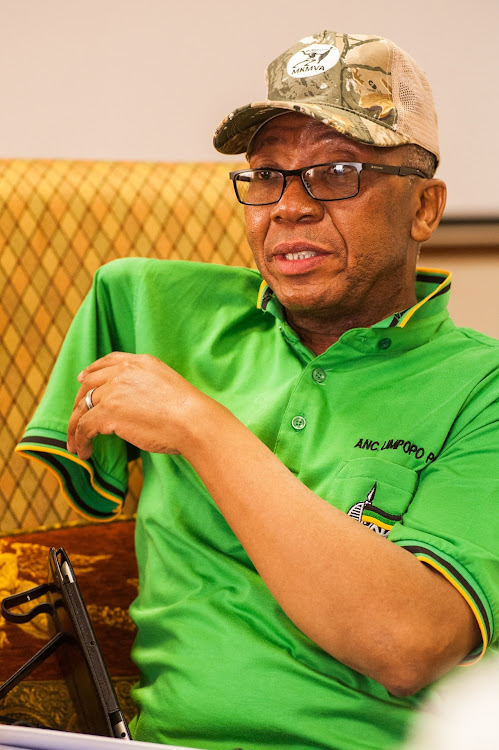 MKMVA president Kebby Maphatsoe described the DA as a racist party that was 'certainly not an organisation that is in alliance with the ANC'. File photo.
Image: WALDO SWIEGERS/SUNDAY TIMES

The ANC’s top six officials, who include President Cyril Ramaphosa and national chairperson Gwede Mantashe, should be reprimanded by the party’s national executive committee (NEC) for ordering ANC MPs to vote in favour of a parliamentary process to test public protector Busisiwe Mkhwebane’s fitness to hold office.

This is according to a letter sent to the office of ANC secretary-general Ace Magashule on Friday by Umkhonto we Sizwe Military Veterans Association (MKMVA) president Kebby Maphatsoe ahead of a weekend-long meeting of the ANC NEC that started on Friday morning. The NEC is the ANC’s highest decision-making body in between national congresses.

In his strongly worded letter, Maphatsoe argues that the ANC’s national office bearers erred by instructing the party’s parliamentary caucus to vote in favour of an independent panel report stemming from a motion sponsored by the DA.

The National Assembly last week voted in favour of a panel report that recommended a special committee be instituted to investigate Mkhwebane’s fitness to occupy her position after it found a prima facie case of incompetence against her.

The independent panel was asked to assess the case against Mkhwebane by speaker Thandi Modise following a motion of no confidence in Mkhwebane by DA chief whip Natasha Mazzone.

Unmasking the ANC MPs who missed the Mkhwebane vote

ANC MPs known to belong to the "RET faction" of the party feature prominently among the legislators who did not take part in a vote to establish a ...
Politics
1 year ago

The ANC officials last week dispatched Mantashe to urgently convene a meeting of the ANC parliamentary caucus to instruct party MPs to vote in favour of the motion against Mkhwebane after some of them, including Maphatsoe, had publicly stated they would shoot it down.

Maphatsoe has now taken matters further, saying the NEC should call out the party’s top six for misleading their MPs.

“It is the strongly held view of the MKMVA that the national office bearers who instructed ANC MPs in caucus erred comprehensively, both in terms of procedure and principle,” Maphatsoe said in his letter.

A total of 275 MPs voted in support while 40 MPs voted against, with one abstaining. The majority of the “yes” votes came from the ANC and the DA.

Maphatsoe said the MKMVA strongly believed the instructions of the top six led to the ANC caucus contravening the ANC constitution and this should be viewed as an act of misconduct.

“MKMVA believes the members of the ANC caucus were wrongly instructed by the national office bearers who told them to vote in favour of the DA motion.

“To vote in favour of the DA, which is white-dominated, has a history of racist conduct  and consistently defends entrenched white privilege, was a terrible failure in understanding and acting in defence of the policies, aims and programme of the ANC. Nor does it past the test that it is the duty of every ANC member to fight against racism.”

The association also believes the ANC should have tabled a counter-motion.

Upheaval and division of the ANC looms if Jacob Zuma is jailed: MKMVA

A handful supporters braved the rain on Thursday to protest outside the Constitutional Court in Johannesburg, where an application is under way to ...
Politics
1 year ago

Maphatsoe described the DA as a racist party that was “certainly not an organisation that is in alliance with the ANC, and therefore to have voted in a process that had been initiated, promoted and sponsored by the DA constituted a flagrant contravention of our ANC constitution”.

He said current confusion cannot be allowed to continue as it created discord within the ruling party and undermined the organisation’s stature.

“It is our firmly held belief in MKMVA that the only reasonable decision for the ANC NEC to take is to instruct all ANC MPs not to vote in future in favour of DA motions.

“This should be applicable not only with regards to the process the DA initiated to remove the incumbent public protector, but also with regards to all future motions the DA may wish to table in the parliament.”

Parliament spokesperson Moloto Mothapo has confirmed parliament has written to Ramaphosa informing him of its intention to establish the committee.

“Parliament has informed the presidency of parliament’s decision to refer the matter to a committee that will be constituted in due course,” said Seale.

Several issues, including the ‘non-step asiders’ and so-called RET faction, are expected to be thrashed out
Politics
1 year ago

ANC splinter group could get out of hand, warns senior party member

Magashule said the MPs would not face any repercussions for not participating in the vote.
Politics
1 year ago