Cosatu 'not abandoning the ANC yet' in the coming elections 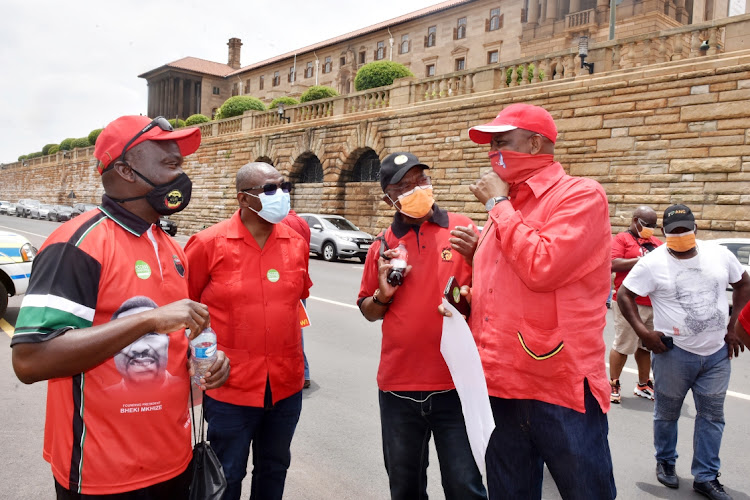 Trade union federation Cosatu will not abandon the governing ANC ahead of this year's local government elections, despite tensions over a wage freeze for public sector workers.

The labour union's special central executive committee decided at a meeting this week that despite challenges faced by the working class and the current tensions, it will not boycott the elections and will implement its resolution of supporting the ANC in the upcoming local government elections, while also contesting its direction.

“We are not abandoning the ANC yet because as part of the alliance, we do not want to open a political vacuum that will see the organisation hijacked by the reactionary and criminal elements who have been attempting to capture it since the 1994 democratic breakthrough,” the union said on Thursday.

“The central committee will continue to assess the state of the alliance and its reconfiguration, taking into consideration the offensive against the working class,” said Cosatu in a statement.

The union said it will have a parallel campaign to defend collective bargaining. This, it said, may complicate this year’s campaign for local government elections.

Cosatu, SACP stand by the ANC as they welcome 'step aside' decision

Cosatu and the SACP have hailed the ANC's national executive committee decision that corruption-accused members must step aside or face suspension.
Politics
1 year ago

“There is a real possibility that workers in the public service and the public sector, in general, will be on strike fighting the wage freeze and retrenchments during elections.

“We will not compromise on this campaign and we are encouraging all our unions to mobilise and fight back against retrenchments.”

The problems facing workers are mainly driven by political choices and decision-making by those in government and other sites of power.

Cosatu said the tensions between workers and the ANC government over the ongoing budget cuts and attacks on collective bargaining were a manifestation of a deep-seated and systemic crisis workers are facing, in all sectors.

The federation said assessment of the state of the tripartite alliance was done every time before any round of elections, because its vote for the ANC is not guaranteed.

The meeting also opposed the postponement of local government elections, saying this would will mean the prolongation of the ongoing corruption, and the indirect endorsement of mismanagement of municipalities.

“After robust and fraternal debates, the special central executive committee concluded that the problems facing workers are mainly driven by political choices and decision-making by those in government and other sites of power.

“This, therefore, means that the federation needs to also combine mass mobilisation with a clear political programme to resolve and undo them,” it said.

The IEC is confident it can conduct free and fair local government elections despite challenges posed by Covid-19 and a big budget cut.
Politics
1 year ago

The meeting concluded that workers do not have the luxury to indulge in political “abstentionism” in the face of deepening class contestations of both the ANC and the state.

“This will also be a fallacy of composition, where we end up dismissing an entire party as rotten on the grounds of one or two components we do not agree with.”

Last September, the largest public sector union, the National Education, Health and Allied Workers' Union (Nehawu), which is a Cosatu affiliate, warned that it would be difficult to convince its members to continue voting for the ANC.

Nehawu's announcement came on the back of the non-payment of the public sector 2020 salary increases, shortages of coronavirus personal protective equipment for front-line workers, non-filling of vacant posts leading to staff shortages and Covid-19 related corruption.

The ANC in parliament has fired off a missive in response to United Democratic Movement leader Bantu Holomisa's call for the dissolution of the ...
Politics
1 year ago