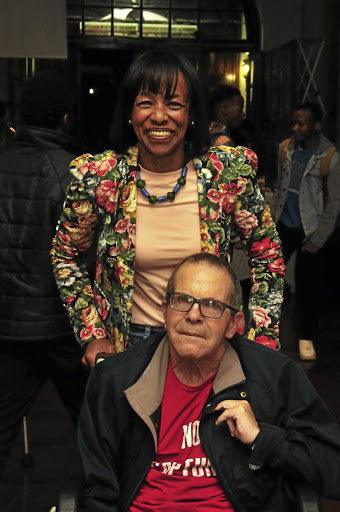 Tributes have come in for activist and education expert Graeme Bloch, who died this week.

“It is said that those we love, who influenced and shaped us, and left their mark, will never leave us. They walk beside us every day, unseen, unheard, but always near. Graeme left his mark on many young activists and remained patient despite our radical and sometimes irrational ideas. For this and so many other fine qualities, he will always be loved, and missed,” they said on Friday.

The group said that Bloch, alongside others, organised winter and summer schools for young student activists, “which in truth were political training and leadership camps”.

“Graeme, along with many others, did not teach us to be obedient, reactive and uncritical activists. They taught us critical skills in debate, argumentation and challenging authority and all forms of oppression. He particularly helped us to study the (political) terrain and make sense of what the situation was, to look at the skies, to see the bigger picture and to find the opportunities present in an unfolding situation.

“More importantly he taught us to map a clear path from where we are to where we wanted to be. ‘Strategy and tactics, comrades, it’s important to understand,’ he would tell us,” the organisation said in a statement.

The congress said that without the help and training it received from Bloch, “we would have been merely energetic, committed, or sometimes fanatical”.

“He guided us to be strategic and wise beyond our age,” the congress said.

“Graeme was a soft-spoken and gentle soul who provided us a kind of mentorship that was firm and decisive, yet never demanding. He didn’t only care about us and our wellbeing, he consciously and patiently went on to shape our lives, not wavering from this commitment he had made to us. At a talk at UWC in 1988 he told us that the new SA was upon us. Many of us brushed it off as wishful thinking. Today we live in a non-racial democratic and non-sexist SA — one he helped to shape,” the organisation said.

President Cyril Ramaphosa said SA was “richer as a nation for Graeme’s intellectual and organisational leadership in the education sector”.

“Deeply saddened to learn of the passing of Graeme Bloch. We recall and honour with gratitude and admiration his contribution to our struggle, from his early days as a passionate, long-haired student activist,” he said.

Deeply saddened to learn of the passing of Graeme Bloch. We recall and honour with gratitude and admiration his contribution to our struggle, from his early days as a passionate, long haired student activist. #RIPGraemeBloch pic.twitter.com/c9r4cZtn1r

The University of the Western Cape’s rector and vice-chancellor, Prof Tyrone Pretorius, said that Bloch’s death was “a loss not only to SA but also to the country’s education system”.

“Graeme was a passionate contributor to the debates and ideas on how to improve SA’s education system so that it could benefit all young people. Prof Graeme Bloch embodied the qualities we hold dear at the University of the Western Cape. In the dark depths of apartheid, he was willing to hope, and to transform that hope into action, standing up against injustice and ignorance with the power of truth, and knowledge,” said Pretorius.

Bloch came from a family of activists, and continued to fight for a non-racial SA. He was part of the formation of the End Conscription Campaign, an organisation that said “No” to military service. As a member of the United Democratic Front (UDF), he was detained and arrested numerous times for his involvement in the democratic movement. He was banned from 1976 to 1981. But he would not be discouraged.

The university said that Bloch didn’t just fight against oppression, but also fought for education and empowerment.

The first premier of KwaZulu-Natal, IFP veteran Dr Frank Mdlalose, has died of Covid-19, the party announced on Saturday.
Politics
1 year ago

A special provincial funeral for the first premier of KwaZulu-Natal, Dr Frank Mdlalose, will take place on Thursday at Madadeni in Newcastle.
Politics
1 year ago