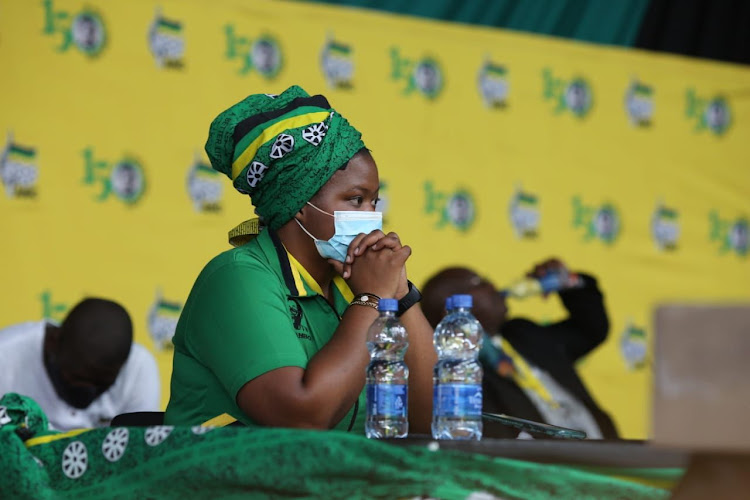 Newly appointed ANC Youth League convener Nonceba Mhlauli says the league has been used by leaders in its mother body as a “pocket knife” in their battles.

“And we need to guard against that, we need to jealousy guard against that because if we allow that, the organisation is not going to live up to its purpose. It is no secret that there are different opinions and perspectives and it would be naive of us to think that as members of the youth some do not have views about what is happening. But what is important is for us to guard against us not fulfilling because we are playing politics of bishops,” said Mhlauli.

"The autonomy of the ANCYL is sacrosanct. There is no confusion about it. That is why it is spelled out in the Constitution of the ANC. You must demand your right to be autonomous." - Cde Kgalema Motlanthe at the Induction of the ANCYL NYTT ⬛🟩🟨 pic.twitter.com/XSVEEqR44W

She said the youth league she is leading should not be there to represent a certain ANC faction but it must be one that is going to serve the youth of SA.

“If we do not guard it jealousy, it's gonna become another youth league that will be a pocket knife and that's something that we cannot afford to happen. The stakes are too high, young people are just destitute right now. Young people are despondent,” said Mhlauli.

She said the organisation could not afford to involve itself in fights that have nothing to do with young people.

Mhlauli gained national prominence when she was appointed as ANC caucus spokesperson when the late Jackson Mthembu was the party's chief whip in parliament.

She later moved with Mthembu to be his spokesperson when he was appointed as minister in the presidency. She took the spotlight during the Covid-19 virtual briefings when some jokingly referred to her as “the voice of God” due to her role in reading media questions sent via WhatsApp.

It hasn’t spared the women’s league or military vets' association, so why would it be different for the youth league?
Politics
9 months ago

Many associated her with the faction supporting President Cyril Ramaphosa but when asked if she was a Ramaphosa “plant” in the organisation, Mhlauli denied this, saying she would work hard to shake that tag.

She said when the structure met with Ramaphosa and the ANC officials, he told them not to allow the elders to meddle in the affairs of the youth league.

The youth league has been in a state of shambles since 2012 when it disbanded its leadership, led by Julius Malema.

Since then, it put together a task team led by Ekurhuleni mayor Mzwandile Masina and it later elected Collen Maine who was labelled “Mr 34.9”, owing to the fact that he was fast approaching 35, a cut-off age to qualify for the position.

The ANC Youth League joins the entirety of our movement in celebrating a life worth emulating, writes ANCYL national convener Nonceba Mhlauli.
Ideas
9 months ago

During his tenure, the ANCYL lost its spark, constantly being overshadowed by the controversy of Malema and his newly founded EFF.

His leadership was then disbanded after it failed to hold a conference when its term ended, ushering in a national task team, led by Tandi Mahambehla, much to the disappointment of young YL members like Mhlauli who went on to label the grouping “the eldership”, owing to the advanced age of its members.

But Mhlauli believes the woes of the ANCYL date back to 2008 where the party's conference in the Free State collapsed, leading to scenes of members showing their buttocks.

At the time Mhlauli was a 17-year-old ANCYL member studying at Rhodes University in the Eastern Cape.

She said her branch was disbanded for refusing to choose sides, a phenomenon happening across the country. In Limpopo, Malema's leadership disbanded the provincial ANCYL structure, which was led by Lehlogonolo Masoga. Masoga was eventually expelled from the ANCYL for taking the party to court.

“So the internal problems of the Youth League predates the removal of [Malema and his leadership], that is my argument. The internal conflict of the youth league, in my view, was as a result of extreme factionalism and that sort of cultish leadership where if you disagree, you get disbanded,” said Mhlauli.

The ANC has announced a task team of 35 people - all under the age of 35 - in an attempt to bring back from life support its dysfunctional Youth ...
Politics
9 months ago

WATCH | Youth League responds to 'ANC marching against itself' backlash

ANCYL activist Lindokuhle Xulu said those who ask whether the ANC is marching against itself want to "render the youth league irrelevant".
Politics
10 months ago