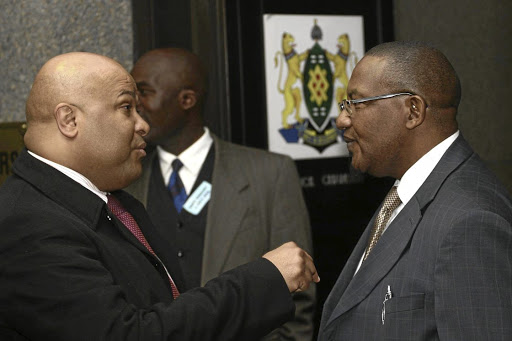 A lawyer for Arthur Fraser (left) says they have received an undertaking by the SSA to declassify the documents required. File image.
Image: Desiree Swart/Business Day

State capture inquiry chairperson, deputy chief justice Raymond Zondo, has instructed former director-general of the State Security Agency (SSA) Arthur Fraser and his former employer to sort out their differences on his request for the declassification of documents.

Fraser last August wrote to the SSA requesting a declassification of documents he believes are crucial to enable him to testify at the commission.

According to him, the SSA refused to play ball, forcing him to approach the commission to intervene and compel the agency to release the documents.

However, Fraser's lawyer Rapulane Kgoroeadira argued on Wednesday morning, only now did the SSA appear willing to hand over the documents his client needs — albeit only if he details why and how they will assist him, which they have done in an affidavit.

To that end, Kgoroeadira held that there was no need for the merits of their application to be heard now, given the undertaking by the SSA to declassify the documents.

The former State Security Agency director-general has laid a criminal charge of perjury after a week of allegations of corruption and malfeasance ...
Politics
1 year ago

Zondo agreed. “Rather than deal with the merits now, let us see what comes out of that process. It may well be that the parties will reach an agreement that what Mr Fraser would have been given is sufficient,” he said.

“I must not be understood to be saying that the applicant’s application does not have challenges and hurdles. But where parties have reached an agreement in trying to sort the matter out, let us give them the opportunity.”

According to Ndebele, SSA had extended an invitation to Fraser six months ago for a meeting to seek an amicable solution on how they could assist him.

However, he charged, Fraser had snubbed that invitation.

“We feel that the application [by Fraser] is the abuse of the commission’s processes,” said Ndebele.

“The matter should just be dismissed and the parties should be allowed to deal with the matter, as they were supposed to do so six months ago.”

The commission's head of the legal team, Paul Pretorius SC, expressed concern that the tussle between Fraser and SSA was unfolding outside the ambit of the inquiry.

What was indisputable, argued Pretorius, was that Fraser had evidence that was essential to the work of the commission.

Thus, he added, Fraser should co-operate.

The estranged wife of former finance minister Malusi Gigaba, Norma Mngoma, had her attorneys read out a letter of withdrawal to the Zondo commission ...
Politics
1 year ago

During 2014 and 2015, Anoj Singh, the then Transnet and Eskom finance boss respectively, was a frequent visitor to Dubai, and his trips somehow ...
Politics
1 year ago

ANC deputy secretary-general was scathing about judge Raymond Zondo’s conduct despite having apologised to him for similar attacks in February.
Politics
1 year ago