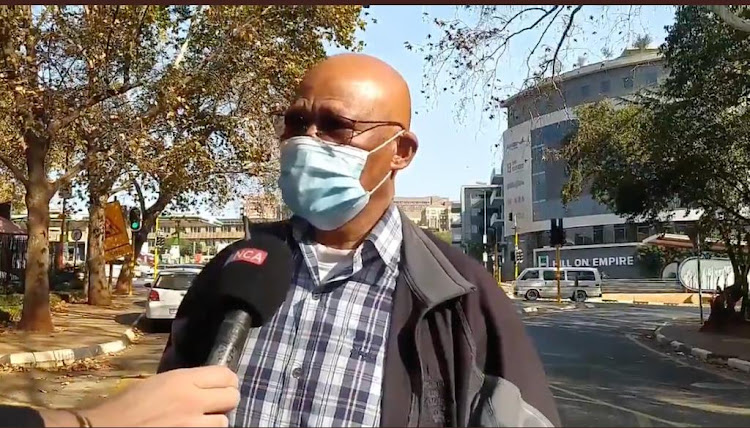 The State Capture Commission of Inquiry's secretary, Itumeleng Mosala, has confirmed that the commission’s offices in Parktown have been burgled.
Image: Amanda Khoza

It is not yet clear whether the computer stolen at the state capture inquiry’s Parktown offices contained information relating to the upcoming appearance of President Cyril Ramaphosa and that of former president Jacob Zuma, the commission's secretary Itumeleng Mosala said on Sunday.

“We are moving towards the end of the commission and so it is a climax in many, many ways. Many things are going to come out from the work that has been done here for the last three years and there are a lot of people who have reasons to be worried,” said Mosala.

Police spokesperson colonel Noxolo Kweza confirmed that the police were investigating a case of business robbery after a break in during the early hours of Sunday.

State capture commission's secretary, Professor Itumeleng Mosala, says it is not clear at this stage whether the stolen computer had information pertaining to @CyrilRamaphosa or former president Jacob Zuma. @SundayTimesZA pic.twitter.com/WBdYE3PDPV

“We are not able to say whether anything we have seen here has anything to do with both of those [Ramaphosa and Zuma] appearances. The venue of the hearings are over on the other side in Braamfontein, here we keep the most important documents and evidence and ours is to protect the documents and the lives of people who work in this place,” Mosala said.

Ramaphosa was expected to appear before deputy chief justice Raymond Zondo at the end of April but the dates had to be changed due to a clash with his schedule. Zuma faces a possible jail sentence for refusing to appear at the commission.

“There has been an indication by somebody else, but I have no knowledge of whether that is true or not, that some of the cameras were not working but the police are onto that particular story and are checking [the cameras to see] what was happening at that particular time.

“We don’t want to be dramatic about this thing because it could very well be something of a petty crime, but this is the state capture commission and all [information] that it here is security sensitive. We don’t want to take chances about it because it is about how this country is going to be prevented from going over a disastrous cliff and so we have called the police and asked them to take it seriously.”

Mosala said this was not the first time that a criminal incident had occurred.

State capture's secretary, Prof Itumeleng Mosala says the break-in is not the first incident. Last week a bullet was shot through a window. He says, with the commission reaching "it's climax you never know whether someone is trying to send a message." @SundayTimesZA @TimesLIVE pic.twitter.com/ra5DVj3ADt

“This was the first real break-in and we had a gun bullet come through the window of the library last week and we decided not to be dramatic about it. We called the police and they looked at it and that case has been registered separately.

“We are beginning to think that we have got to be careful. We may very well see a pattern coming through but whatever it is we are not suspecting anybody or anything, we are simply saying that we need to protect what is here, which the public has paid a lot of money for, so we are not about to dump that.”

When TimesLIVE arrived at Hillside House building, there was a hive of activity with several law enforcement agencies combing the scene. Police tape cordoned off access into the doors of the main entrance of the building.

Police were on Sunday at the state capture commission's offices in Parktown in Johannesburg after a reported burglary.
Politics
1 year ago

It was not immediately clear how the intruder entered the building and several people that TimesLIVE spoke to had no knowledge of the incident.

A JMPD officer manning the Rea Vaya Parktown bus station was shocked to hear that a burglary had occurred.

The man said, “My shift started at 6am, I did not see or hear anything but suddenly at around 11am there were a lot of police officers on the premises. I thought someone had died.”

The 39-year-old man, who asked to remain anonymous, said it was strange because “there are always security guards there”.

Across the road, at the BP petrol station, employees said they did not know about the burglary either.

“It is strange because this has never happened and I have been working here for many, many years. But you never know, there is always security there, someone might have seen something and thought it was just the security doing their job,” said a petrol attendant who also asked not to be named.

Bonginkosi Vilakazi, who is homeless and sleeps in an open field opposite the building said at around 9pm the traffic lights went off.

“I just decided to go and sleep. We didn’t see anything or hear anything and this is the first time I am hearing about a burglary in this building.”

Meanwhile, the commission spokesperson, Mbuyiselo Stemela, said the commission is expected to hear parliamentary oversight related evidence from the National Assembly speaker, Thandi Modise, at 10am on Monday.

Chairperson of the National Council of Provinces, Amos Masondo, as well as former ANC secretary-general Gwede Mantashe are also expected to appear before deputy chief justice Raymond Zondo on Monday.

The ANC in KwaZulu-Natal has appealed to President Cyril Ramaphosa to continue negotiating with former president Jacob Zuma to end the impasse with ...
News
1 year ago

The change flies in the face of Zondo's own wish to wrap up oral hearings no later than the first week of May.
Politics
1 year ago

A 'sham' and 'political gimmicks', says Zuma as he refuses to provide affidavit to ConCourt over sentence

Former president Jacob Zuma says he will not be filing an affidavit to the Constitutional Court — and in a 21-page letter to chief justice Mogoeng ...
News
1 year ago