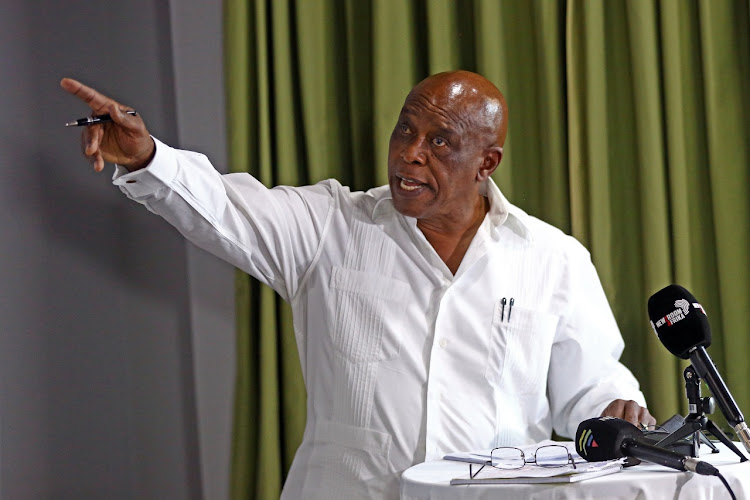 Businessman and former cabinet minister Tokyo Sexwale claims that the government rejected a donation of R75bn to the Solidarity Fund, which was formed to fight Covid-19.

“When Covid-19 came and the president said he was wanting to be assisted to raise money and he raised R3.25bn, he says he sent international envoys to look for the money for the Solidarity Fund,” said Sexwale.

“We said to Kganyago [Reserve Bank governor Lesetja Kganyago] go and look from our accounts and give to this presidential Solidarity Fund and he asked the bank how much they should draw. They asked for $5bn [R75bn] for the Solidarity Fund,” said Sexwale.

Furthermore, Sexwale claimed that the government was offered money to increase the social relief grant from R350 to R2,700.

Sexwale was speaking during a press briefing in Midrand, Gauteng, on Thursday where he sought to expand on how funds meant for the poor had allegedly been looted from his “heritage fund”.

Sexwale first made the allegations on eNCA.

The businessman said while making sure this money had been brought into the [SA] economy, they encountered some resistance and upon investigation found it had been stolen.

Businessman Tokyo Sexwale has made startling claims about how he was stonewalled by top figures in government when he alerted them about alleged ...
Politics
3 weeks ago

The National Treasury and the Reserve Bank said on Monday the fund was nothing but a scam in which the ANC businessman had been duped.

The fund was intended to finance the country's infrastructure investment and social programmes at a low interest rate of 1%.

Sexwale said he received no favourable response from finance minister Tito Mboweni or President Cyril Ramaphosa after informing them of his heritage fund. He said he told Ramaphosa that the funds held in a private account in the Reserve Bank had been unlawfully transferred to six accounts.

“Under the watch of and direction of the Reserve Bank the same has occurred in the original seven commercial banks and in fact moved to a further three banks in SA as well as individual accounts in London, Malaysia and several other jurisdictions,” he charged.

He said the names of the account holders were known to the trustees of the heritage fund, called White Spiritual Boy (WSB).

Referring to what the fund offered the government, he said, “We wrote and offered them money to the Solidarity Fund, we told them to take it from this account and give it to these people. Take this money and increase the grants of Covid-19 which are short, Mr President, from R350, give them R2,700 from this money.”

He said the fund's account was held by the Bank for International Settlements, the banker of central banks based in Switzerland.

Sexwale said the money needed to be “moved into the economy” before any transactions could take place.

It was at that point that the main funder called Sexwale, alerting him that something was amiss.

“Where this money was interfered with in the whole continent is SA only. In other parts of the continent, it is intact. Something strange started happening, we were called by friends, presidents, ministers, governors of banks on the continent and they were only shaking.”

Sexwale said he was told that there were rumours that he “was running around with a scam”.

“The silence around this thing is deafening ...Then we decided to [anonymously] privately write to the Solidarity Fund and donate a small amount and a reply came the following day. What type of country are we living in? The government is trying to borrow money to address the debt and Tito had told the international banks that he is raising money and he said to parliament they will need about $1bn per week. We offer that amount to help SA, we said download that amount.”

To borrow government money, you needed to buy the bonds and a letter was written to the National Treasury informing the department of the intention of borrowing government money.

Another letter was written to Kganyago and he allegedly said he would “authenticate and revert”. Sexwale said he never heard from him again.

When journalists asked Sexwale to provide a police case number, he declined.

He also refused to divulge the names of those implicated in the alleged money laundering.

When asked what was in it for him, he said he worked for the fund and would be paid a fee. “There is a percentage that I derive ... It is just a percentage but it is good.”

A man who claimed to be a Reserve Bank shareholder, Fannie Fondse, stood up at the media briefing and said, “I can confirm in front of everyone that that account exists ... I congratulate you for taking the stance to open it in public.”

ANC veteran Tokyo Sexwale found himself topping social media’s trending list this week after he made claims about billions of rands being stolen from ...
News
3 weeks ago

TOM EATON | It’s not even Fanie anymore: Sexwale does a Trump on truth

'Mr Tokyo Sexwale’s statement about stolen money is untrue, sad and [it] seems that he was a victim of the many scams around,' says finance minister ...
Politics
3 weeks ago
Next Article