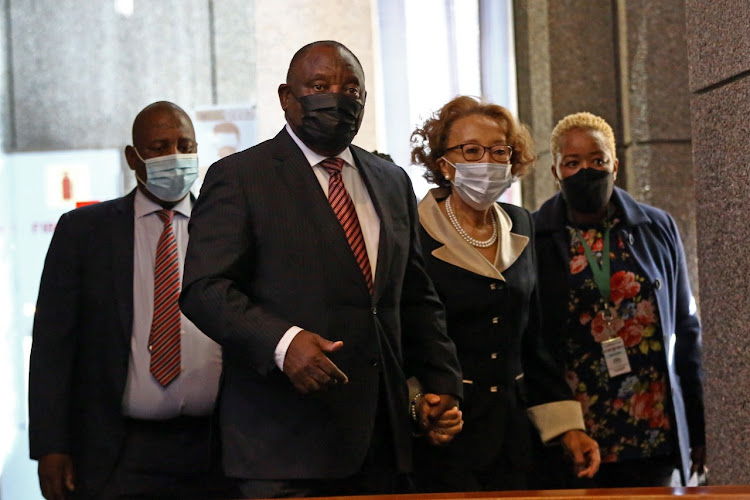 'The vast majority of ANC members and leaders are vehemently opposed to corruption in all its manifestations,' said Cyril Ramaphosa, seen at the state capture inquiry accompanied by his wife Dr Tshepo Motsepe.
Image: Thapelo Morebudi/The Sunday Times

ANC president Cyril Ramaphosa has acknowledged that members of the party have engaged in acts of state capture and corruption for a number of years.

However, Ramaphosa put his head on the block that the current ANC leadership headed by him was determined to defeat state capture and corruption once and for all.

Ramaphosa was appearing at the state capture inquiry on Wednesday.

In a 45-minute-long opening statement, Ramaphosa sought to explain the roots of corruption in the country.

He said corruption was “not new” because it was also rampant and “systemic” during the apartheid government. However, he added, this was not to cover up for ANC's own shenanigans in unwittingly enabling corruption.

We are determined to ensure that the era of state capture is relegated to history.

In an attempt to explain the ANC's delay in confronting its former president Jacob Zuma and his allies' controversial relationship with the Gupta family, Ramaphosa said it took time for all in the country to properly understand the phenomenon.

He acknowledged that the party could have reacted as early as 2011 to allegations of state capture, when ANC NEC members told an NEC meeting about how the Gupta family knew about his appointment before it was known to him.

Their delayed action against state capture and corruption was further exacerbated by the fact that “corruption is by its nature a covert activity”.

“Without direct evidence and face of vehement denials, it is difficult for any structure to confront corruption,” said Ramaphosa.

During the Zuma years, said Ramaphosa, corruption was rampant within the ANC structures, mostly enabled by “weak and pliable ANC branches”.

"Exercising our right to vote is by far the most powerful form of protest. If those who claim to serve you are not doing so, vote them out, because ...
Politics
8 months ago

The ANC, having a full understanding of how corruption and state capture manifest, displayed in its 2017 Nasrec conference that it was willing and able to confront malfeasance and plunder of public money head-on.

To support this, he cited several resolutions from the conference, among which the resolution that all accused of corruption must subject themselves to the party's integrity commission.

He also stated that as early as March this year, the party's highest decision-making structure between conferences solidified its step-aside resolution to have those charged with corruption and other serious acts step aside or face suspension.

Ramaphosa said it was individual ANC members who were engaging in corrupt activities and that the party would never take the fall on their behalf.

“The ANC did not and could never direct its members or leaders to commit acts of corruption,” said Ramaphosa.

“While the ANC distances itself from those within its ranks who have been involved in corruption or who are complicit in state capture, the organisation does acknowledge that it must provide answers for the matters under investigation by the commission.

“We should do so because state capture took place under our watch as the ruling party. It involved some members and leaders of our organisation,” he went on.

“I should, however, say that the vast majority of ANC members and leaders are vehemently opposed to corruption in all its manifestations.

“We are determined and we undertake to work alongside all South Africans to ensure that the era of state capture is relegated to history and that the excesses that took place may never and never ever occur in our country.”

President Cyril Ramaphosa on Wednesday arrived to give evidence at the commission of inquiry into state capture, supported by his wife Dr Tshepo ...
Politics
8 months ago

President Cyril Ramaphosa will appear at the state capture inquiry on Wednesday.
Politics
8 months ago

"When Ramaphosa appears before the commission of inquiry into state capture headed by deputy chief justice Raymond Zondo this week, his chosen path ...
Opinion & Analysis
9 months ago