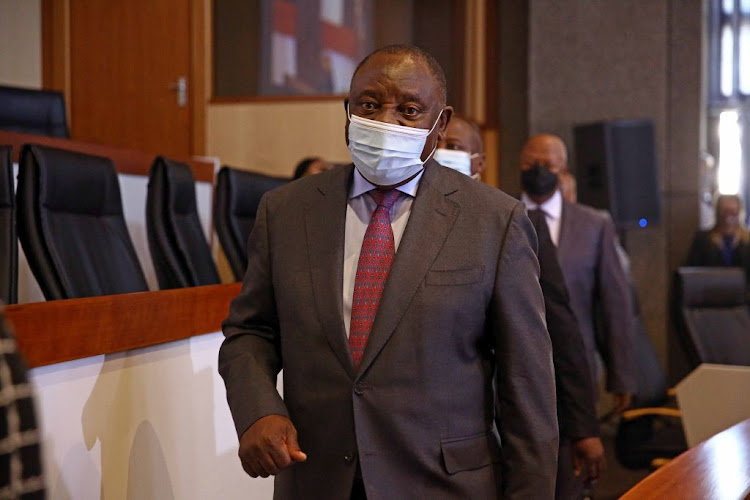 President Cyril Ramaphosa arrives at the state capture inquiry on April 29 2021 to testify in his capacity as the president of the ANC.
Image: Thapelo Morebudi/The Sunday Times

President Cyril Ramaphosa has joined a chorus of ANC leaders who have appeared at the Zondo commission saying that ANC MPs were driven by party line in the spirited defence of their scandal-prone former president Jacob Zuma.

Ramaphosa was cornered by the commission on Thursday on why the ANC closed ranks to defend Zuma in motions of no confidence against him that were moved by opposition parties.

However, Ramaphosa conceded that there were “exceptional circumstances” in which individual conscience of members should be allowed to flourish.

The ANC president said the country's party system was a fertile ground for represented parties to vote as a bloc.

He added that MPs were in parliament on a party ticket, thus it was logical for the party to have the last word on how they vote, particularly on issues with political consequences such as removing a sitting president.

It was on this basis that the ANC constantly voted in defence of Zuma and that was unlikely to change under the country's current political system.

Besides, said Ramaphosa, the ANC was not the only one, because EFF MPs, for example, were also walking out as a bloc whenever one of their own was ejected from the house for one transgression or the other.

The conflict between party line and individual conscience, he said, was a controversial issue the world over.

“It is a controversial issue and we are not the only ones thinking about this matter, even in the oldest of democracies in the world they are deliberating over these types of matters.

“There is tension that is created there. Political parties, by their nature, have what we call the herd mentality. But there is always an exception for one or two members of the herd to hold different views.”

Ramaphosa said there were other political considerations that tended to sway members more towards towing the party line.

For instance, he argued, voting out a sitting president would lead to the collapse of the whole national executive, which would give rise to instability in the government.

“That being said, members do take an oath as members of parliament, and the oath they take places country, constitution and the people first.

“And this happens all over the world. But there is a party line on all issues. Given that, the party will insist on party discipline.”

The silver bullet, for now, he said, was to find balance on issues that require voting on party line and those that require individual conscience.

Cyril’s new obsession: public servants who actually know how to do their jobs

Ramaphosa distances himself from dozens of Zuma's key appointments

President Cyril Ramaphosa told the state capture inquiry it was unfortunate that most of former president Jacob Zuma's appointments "ended up being ...
Politics
2 weeks ago

In an attempt to explain the ANC's delay in confronting Jacob Zuma and his allies' controversial relationship with the Guptas, Ramaphosa said it took ...
Politics
2 weeks ago
Next Article