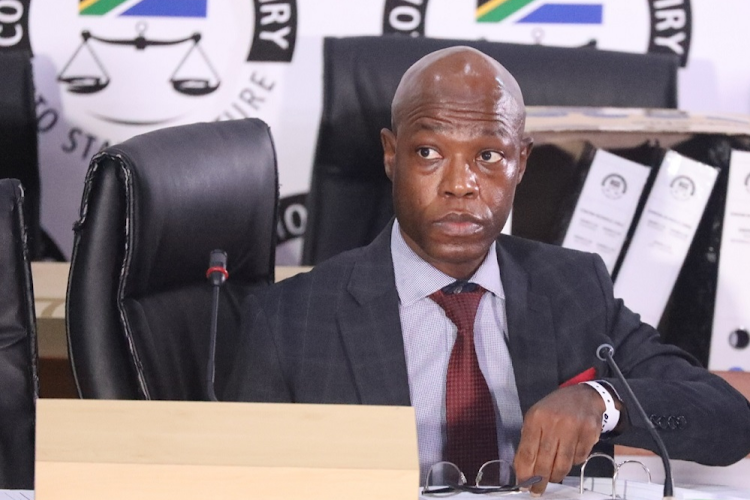 Former Eskom executive Matshela Koko on Tuesday morning accused the state capture inquiry of entertaining “lying” witnesses. According to him, many witnesses have been allowed to lie at the inquiry without any consequences to advance “the Koko hunt”.

It was high time this is brought to an end if the inquiry is serious about ascertaining the truth about state capture, he asserted. Koko urged the inquiry’s chairperson, deputy chief justice Raymond Zondo, to be merciless against lying witnesses.

Among the witnesses Koko believes have lied at the inquiry include former Eskom company secretary Suzanne Daniels. Koko said Daniels has been selectively giving evidence that paints her as a non-player in corrupt dealings at Eskom when in fact she was an enabler.

To back his claim, Koko said it was Daniels who once sent him an e-mail and copied the infamous info-portal e-mail address which allegedly belonged to Gupta lieutenant Salim Essa.

State capture commission chair, deputy chief justice Raymond Zondo, said on Tuesday he was not convinced by Koko's claim that he had no idea he was ...
Politics
2 months ago

Koko promised to provide the e-mail communication to the chairperson, saying the inquiry’s investigators have been dragging their feet on getting that e-mail to “protect” Daniels.

Another witness who was lying with impunity, claimed Koko, was former Glencore CEO Clinton Ephron.

It was unacceptable to Koko that the commission had allowed Ephron to say President Cyril Ramaphosa was never the chairperson of Glencore, only for him to come back later saying he was misled.

What was worse regarding Ephron, Koko alleged, was that all his statements at the inquiry were not under oath, which was proof “he is lying”.

These people who come to the commission to lie, there has to be consequences.

Koko insisted it was unthinkable that Ephron would forget who was chair when he was CEP of Glencore.

The only conclusion he could arrive at is that Ephron “lied deliberately” to mislead the inquiry.

Koko then pointed his arrow at former Eskom board chair Ben Ngubane, whom he also accused of getting away with lying when he claimed he believed the info-portal e-mail address belonged to former public enterprises director-general Richard Seleke knowing full well Seleke was not at the department at the time.

Former Trillian Capital and Regiments Capital financial advisory boss, Mosilo Mothepu, had also misled the inquiry with her claim that Koko led Eskom negotiations with McKinsey for the conclusion for a master service agreement, he alleged.

“Here comes the lead negotiator [in an affidavit] from McKinsey saying I negotiated this contract and Mr Koko was never involved.”

Koko said the inquiry must find a way to punish witnesses who “lie deliberately” to stop others who might be toying with the idea of misleading the inquiry to settle personal scores or nail their historical enemies.

“It cannot be that witnesses come here to mislead you and get away with murder. I come here to assist you to get to the truth,” said Koko.

“These people who come to the commission to lie, there has to be consequences.”

The high court has granted the NPA's Investigating Directorate an order to freeze R1.4bn in assets belonging to former Eskom executives and former ...
News
2 weeks ago

Siyabonga Gama denies Guptas paid for his 2016 stay in Dubai

Former Transnet CEO Siyabonga Gama has denied that any Gupta-owned business paid for his stay at a hotel in Dubai.
Politics
2 weeks ago

Former Eskom executive Matshela Koko has distanced himself from doing the bidding of the Gupta family through their lieutenant, Salim Essa.
Politics
1 month ago
Next Article