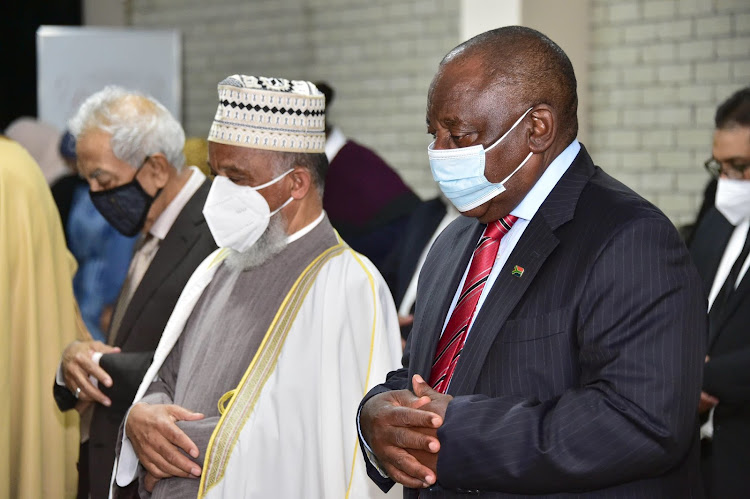 President Cyril Ramaphosa said the Muslim community, working with other faith communities, had joined hands with the government at a time when there was so much fear and uncertainty.

And he asked that they continue to do so as the country continues on a path of recovery.

Ramaphosa joined the South African Muslim community for an evening of iftaar in Athlone, Cape Town, on Wednesday.

“I want to thank our religious leaders who put health and safety first and made the extremely difficult decision to keep places of worship closed during the early days of the lockdown, and to comply with regulations in subsequent months.

“I speak of the many soup kitchens opened, the food parcels distributed, and the water provided to destitute communities. But I also speak of the community members who gathered outside hospitals in the city to offer prayers and songs of support to the patients inside,” he said.

Ramaphosa said the Muslim community in SA was known for how it helped society.

“The Muslim community in SA is known for its contribution to community upliftment, to helping the poor, and for working to overcome poverty, inequality and underdevelopment. This is a tradition of charity that has been maintained regardless of the faith or non-faith of those in need,” he said.

He also praised the community for its role in fighting for SA's freedom.

“Acknowledging this contribution is key to having an inclusive history. During our struggle for liberation, Athlone was an important site of resistance politics, particularly among the student and civic movements. Athlone was an active centre for the United Democratic Front and many of our leaders from the Muslim community were in its structures.” He said.

Ramaphosa said the Covid-19 pandemic has changed the way of living.

He called on the Muslim community to join hands with the government in the national recovery and reconstruction effort.

“I call on our community and its leaders to continue to be part of the moral regeneration of our society so we can free ourselves from of vice, from crime, from violence, from corruption, and from ignorance and discrimination,” he said.

Ramaphosa said Ramadan was a sacred month with deep spiritual significance for the Muslim community, and more than 1.5 billion Muslims around the world.

“It is a month of prayer, discipline and sacrifice when Muslims affirm and renew their commitment to their faith. But it is also a month of solidarity, charity and empathy with those less fortunate,” he said.

Referencing the sixth local government elections coming up in five months, he said the vote was the most potent weapon.

“The vote is the most potent weapon in the hands of all who aspire to a better society that is more compassionate, that is kinder to the suffering and the needy, that is more equal, and that respects the fundamental rights and freedoms of all,” he said.

ANC president Cyril Ramaphosa has told the party's MPs he's "dismayed" by the conduct of suspended secretary-general Ace Magashule, for claiming that ...
Politics
6 months ago

'It was beyond our control': Ramaphosa defends vaccines delay in heated parly debate

'We are not the only country that has been shortchanged when it comes to vaccines,' President Cyril Ramaphosa tells MP during Q&A session.
Politics
6 months ago

From step-aside fight to 'suspensions': A timeline of Ace vs Ramaphosa so far

Ace Magashule vs Cyril Ramaphosa: here is a timeline of what's happened so far.
Politics
6 months ago