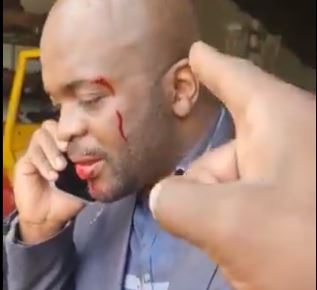 A screengrab from a video of an altercation on Thursday between DA leader Solly Msimanga and an unknown man.
Image: Screengrab

The DA has condemned an attack on Gauteng leader Solly Msimanga, who was left with a bloodied face.

A video showing him bleeding started circulating on Thursday, with an unidentified man accusing Msimanga of being a liar and a thief, and of owing him R1.4m.

In the video, Msimanga was bleeding from the mouth and head.

“Msimanga categorically asserts that he owes no-one any such money and will consider laying charges against the assailant,” Nel said.

SAPS Gauteng spokesperson Capt Kay Makhubele said he had seen the video, but that by 5pm a case had not yet been laid against the man.

According to Nel, Msimanga was on a social visit to his cousin in Benoni when the assailant, a business partner of the cousin, attacked a family member. Msimanga tried to intervene when he, too, was attacked.

“While on video, the assailant then accused Msimanga, who was on the phone to police, of owing him money,” said Nel.

[JUST-IN] DA Gauteng Leader @SollyMsimanga was beaten up. “This is what happens to liars and thieves” #sabcnews pic.twitter.com/aMMWWqafNd

The assailant was arrested and has since publicly apologised to Msimanga, confirming that no money was owed to him by Msimanga.

According to Nel, the assailant also offered to pay the medical expenses and other losses Msimanga may have suffered in the process.

“The DA condemns this vicious and criminal attack on the provincial leader. Our country’s constitution asserts the rule of law as a founding provision. If there is a disagreement, whether involving money or not, South Africans should commit to working through the parameters of the law to resolve their differences,” he said.

“No-one has the right to take the law into their own hands and compromise the rights of others, as occurred today. Violence is definitely not the answer. Since this is a personal matter, the DA will respect Msimanga's decision on how to further deal with the matter.”

The Gauteng premier survived a motion of no confidence brought by the DA.
Politics
1 year ago