WATCH | Chaos breaks out in parliament over 'Ramaphosa suspension', Mboweni weighs in 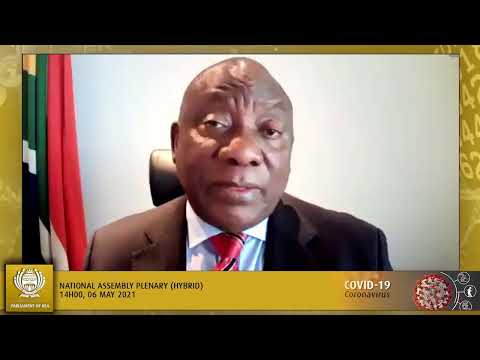 It all started after Shivambu asked Ramaphosa not to address the House following reports that he had been “suspended” by ANC secretary-general Ace Magashule. Watch the video from 9 minutes and 50 seconds mark.

“All of us who are here are representing political parties. Who is representing the ANC? The information we have is that Mr Ramaphosa is suspended from the organisation. So you must clarify who he is representing because he’s not permitted,” said Shivambu.

Deputy speaker Lechesa Tsenoli shut down the line of attack, saying he would not take any orders.

“We don’t know what you’re talking about. As parliament, as far as we are concerned the president is here to respond to questions,” said Tsenoli.

“I am confused if you are legitimately in parliament, since your membership of the party which lends you a seat has been suspended. Anything else that you do now will amount to fraudulent activities,” said Malema.

While Ramapahosa remained mum on the EFF’s question, he did respond to DA leader John Steenhuisen’s statement regarding him being a “weak president” and disappointing the ANC.

Ramaphosa said ANC’s internal issues were none of the opposition party’s business.

“I’m just wondering what Mr Steenhuisen ate at lunch because it seems he’s a very angry young man,” he said.

“Let me just say, without going through the waffle of factional battles that have nothing to do with you, when you were involved in your own battles in the DA, you never heard a single one of us say anything. We did not comment because it’s not our space.

“What happens in the DA is your business and what is happening in the ANC is not your business, it is ANC business.”

The chaos at parliament made its way onto social media with finance minister Tito Mboweni condemning it.

Mboweni said the disruption was “childishness” and “anti-democracy”.

“To be disruptive, disorderly, disrespectful, uncouth, ungovernable and noisy in the National Assembly is not revolutionary. It is left-wing childishness! Actually right-wing behaviour and anti-democracy,” he lambasted.

“Failure to implement resolutions on a state bank and SARB [the SA Reserve Bank] is counter-revolutionary and reactionary,” said Shivambu.

To dismally fail to manage South Africa’s economy and to attend 90% of National Treasury meetings under the influence of alcohol. Failure to implement resolutions on State Bank and SARB is counter revolutionary and reactionary. Drunkards must focus on alcohol and Magoebaskloof. https://t.co/VdJCXDzTWi