I am not going to tell parliament how to do its job, says David Mabuza 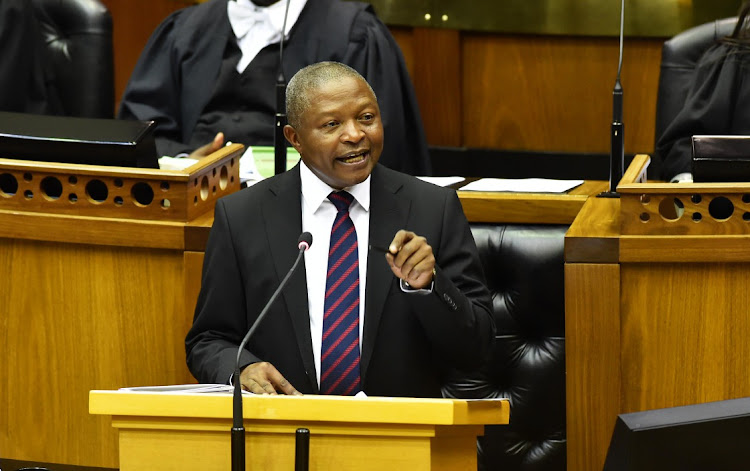 Deputy president David Mabuza on Wednesday said he was not in a position to tell parliament how to do its job.

“I am not going to instruct parliament on how best parliament should conduct its affairs. That will be at the hands of parliament as they do their oversight to take the appropriate action wherever they feel necessary,” said Mabuza.

He was responding to a question by DA MP and shadow minister of mineral resources and energy, Kevin Mileham, who told parliament that allegations had arisen around the Risk Mitigation Power Procurement Programme, where well-connected individuals had allegedly benefited.

It was alleged that senior department officials and members of minister Gwede Mantashe’s family had apparently attempted to manipulate the process of identifying successful bidders.

Mineral resources and energy minister Gwede Mantashe has denied involvement of his wife in the awarding of a multibillion-rand tender for the supply ...
Politics
1 year ago

Additionally, said Mileham, one of the successful bidders had been associated with alleged corruption in Lebanon.

“Would you support a comprehensive investigation by this parliament into this programme, and if not, why not?” he asked.

Mabuza responded by saying: “We must be ready as a nation to fight it [corruption], and if these allegations are something that we can believe, I think we should take the necessary measures and consult the relevant institutions about these allegations.”

Mabuza said that, for now, these were merely allegations and suggested that law- enforcement institutions be approached so that the allegations could be probed further.

The Sunday Times reported previously that a company which has corruption fighter and anti-apartheid activist Lord Peter Hain on its board launched a court challenge to the department of mineral resources & energy's recent appointment of preferred bidders for emergency power generation.

According to the report, DNG Power Holdings alleges the appointment involved undue influence by department officials and “underhanded and corruptive activity” by people connected to Mantashe.

DNG was reportedly one of the failed bidders in the 2,000MW Risk Mitigation Independent Power Producer Procurement Programme (RMIPPPP), which the department launched last year to add urgently needed short-term capacity to the grid in the next 18 to 24 months to mitigate SA's electricity crisis.

Mantashe reportedly announced the results of the programme on March 18, awarding more than 60% of the capacity to Karpowership, a Turkish company that owns and runs gas-fired generators on ships.

Earlier Mabuza told parliament that the government fully understood the growing calls for Eskom’s tariffs to be kept at a reasonable level of affordability, especially for poor and marginalised communities.

In a follow-up question, Mileham asked about government’s efforts to alleviate the electricity supply constraints and the envisaged affect of the 20-year agreement that will be concluded with the success of bidders of the Risk Mitigation Power Procurement Programme on electricity tariffs over the medium-term expenditure framework.

Mabuza said: “The estimated tariff increase is subject to assessment and decisions by the National Energy Regulator of SA. All of us should protect the operational independence of the regulator, but still require of it to apply appropriate tariff mechanisms in the determination of tariffs associated with the type of power that is required to balance the system over the medium-term expenditure framework.”

He said the department of mineral resources & energy and energy advised that, if based on weighted average cost per unit of about R1.57 per kilowatt hour from the preferred bidder projects, the additional 1,995 megawatts of capacity may result in electricity tariff increase of 3%-5%.

In this instance, the government will await the decision of the regulator.

“It must be noted that the cost includes both capacity and energy as per the requirements of Eskom system operator. The nature of electricity supply constraints calls for increased generation capacity across different supply options to alleviate the current electricity demand and supply gap,” he said.

Mabuza said the 20-year commitment seeks to, among others, ensure reasonable electricity unit cost while taking into account the nature of electricity supply constraints.

“Basing the risk-mitigation independent power producer procurement on a 20-year power purchase agreement will ensure that the projects around this additional capacity remain sustainable.

“This means that costs are covered, while guaranteeing capacity that is available to generate electricity whenever a dispatch instruction has been activated. In this context, our generation capacity should be such that there is available energy to be reliably supplied whenever there are projected shortages in the system.”

He said the need to attract long-term investments in power generation is key to ensuring the security of energy supply while also realising expected returns from such investments by the private sector.

He added that initiatives emphasise the government’s commitment to ensuring energy security from a wide range of energy sources and technologies in line with the Integrated Resource Plan of 2019. In the medium to long-term, the reduction of expensive, diesel-fired electricity generation is achieved.

Mabuza assures MPs that vaccination procurement is above board

Deputy president David Mabuza on Wednesday assured parliament that no corruption had occurred during the government’s process of securing and ...
Politics
1 year ago

The ANC has denied allegations that its deputy president David "DD" Mabuza and treasurer-general Paul Mashatile pocketed millions meant for the ...
Politics
1 year ago

The legal challenge by wine producer body Vinpro against the government, whereby the body is contesting specific aspects of decision-making in ...
News
1 year ago