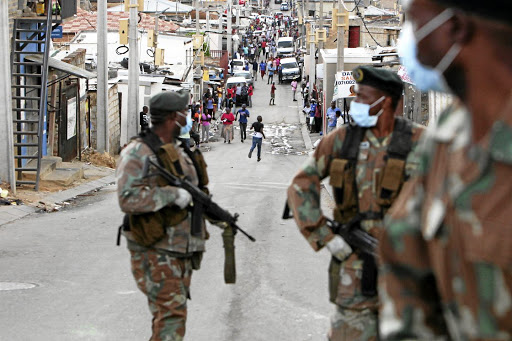 The defence force's capital budget has effectively been reduced to a trickle and the operating budget is under extreme pressure, says minister Nosiviwe Mapisa-Nqakula.
Image: Alaister Russell

SA may lose its state-owned defence industrial base and the ability to repair, maintain and overhaul most of its defence systems if the budget continues to be slashed.

This is according to defence and military veterans minister Nosiviwe Mapisa-Nqakula, who decried her department's ever-decreasing budget.

Mapisa-Nqakula, who was presenting the defence and military veterans' budget vote to the National Assembly on Tuesday, said that while she appreciated that the fiscus was severely constrained, the declining allocation has had a negative effect on SA's military capabilities. In particular, she said, on the department's ability to meet operational responsibilities assigned to it and on its international obligations.

She said the reduction of more than R15bn in the next three years has placed her department in a very difficult position. The department has been allocated R46.3bn, down from R52.4bn in the previous financial year.

“Our capital budget has effectively been reduced to a trickle and the operating budget is under extreme pressure. Under these conditions, we are finding it very difficult to improve the serviceability of our prime mission equipment,” she said. “While we are fully aware of the fiscal challenges that SA has, the reduction to our allocation has a devastating affect, not only on the defence force, but also our defence industry, our  defence-related industry and the many small companies in the supply chain.

The 6 SA Infantry Battalion training area is now being used by illegal hunters and livestock thieves, say the farmers.
News
1 year ago

“I am at great pains to remind this house that this is a matter which I raised in my 2019 budget vote speech.

“If we are honest with ourselves, we now face the reality that if we do not intervene in a decisive manner, we will lose our state-owned defence industrial base and the ability to repair, maintain and overhaul most of our defence systems,” said Mapisa-Nqakula.

This, she said, would not only compromise the ability to maintain current equipment in service, but also fundamentally affect the longer-term ability to remain relevant and ready to conduct effective operations in the future.

“Should this happen, we may well find ourselves reliant on foreign powers for our main equipment, and this will come at great strategic expense.

“The knock-on effect of this has had dire consequences for the contribution that the defence industry makes to science and technology development, manufacturing, export earnings, education and artisan training, jobs for our people and the economy in general,” she said.

Mapisa-Nqakula said the ability to maintain main equipment for operations has declined to the point where they need to ask if it was in fact viable to continue to throw resources at them. This, coupled with the demise of the defence industry and in particular Denel, has placed the department in a very precarious position, she said.

The maritime defence is in a similar situation, said the minister.

“While we commend the efforts of Armscor to turn around the dockyard, we are nonetheless finding it difficult to maintain our fleet against the float, sail and fight concept of combat readiness,” she said.

Turning to instability in the Sadc region, she said there will have to be careful and deliberate co-ordination of security efforts between member states to claw back the losses to human security throughout the region.

“We continue to be concerned by the security developments in the region, in particular the upsurge of insurgency in our neighbouring country.

“This has a potential of spilling over the entire region. The Sadc regional leadership is seized with the matter and we hope for a speedy resolution,” she said.

Opposition MPs were not buying it.

The government had no significant response against the insurgents, and it failed to evacuate our citizens from Palma. They had to rely on the DAG pilots and personnel to get them safely to Pemba,” said Marais.

He said the instability in Cabo Delgado damaged the development of one of the biggest LNG production and economic development opportunities in the world, and has significantly increased the risks along the land and maritime borders.

“To date we have not seen any meaningful improved land-border safeguarding measures, and the decay of our strategic defence capabilities in the navy and air force has exposed us in the air and the sea,” said Marais.

He said Mapisa-Nqakula had stumbled from one embarrassment to the next over the past year and that she was damaging President Cyril Ramaphosa's reputation and integrity, and that of her office and the SANDF.

The EFF's Tseko Mafanya called for the minister to resign, saying she was out of her depth.

“Minister, it is under your leadership that the department of defence and military veterans has deteriorated to a point whereby the department cannot fulfil its mandate optimally,” he said.

Mafanya said on its oversight visit to the borders of Mozambique, Swaziland and Zimbabwe, the portfolio committee on defence and military veterans found that soldiers were exposed to horrific, unacceptable and intolerable working conditions.

Thanks to Denel’s financial implosion, the force may no longer be with us

Thieves managed to breach security at Hoedspruit Air Force Base and break into an office at the weekend.
News
1 year ago

An assault rifle identified as SANDF property and a shotgun registered to a late estate, were among the weapons found after a suspect was arrested ...
News
1 year ago