Former state security minister says “rogue elements” are out to get him. 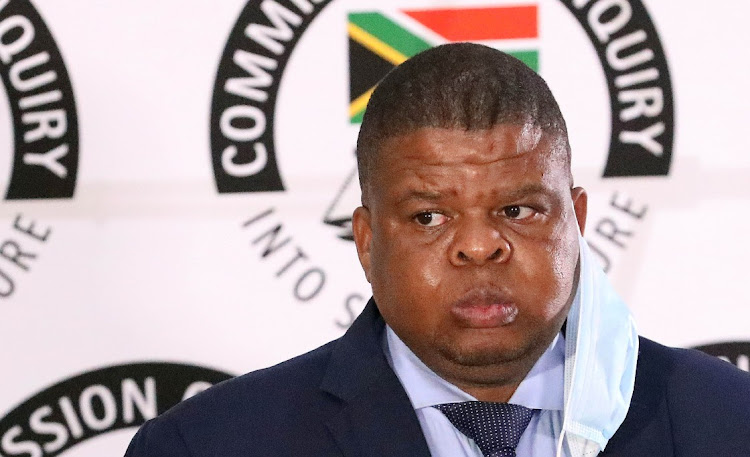 Mahlobo, testifying at the Zondo commission on Wednesday night, said all who have implicated him were “rogue elements” within intelligence circles desperate to feed into the narrative that Zuma had assistance to wreak havoc in the state security apparatus.

The seven witnesses who told the state capture inquiry that Mahlobo collected millions of rand for Zuma and himself were, he charged, lying through their teeth.

One intelligence operative had told the inquiry that they collected cash in tranches of R2.5m which they delivered to Mahlobo with its intended destination being Zuma.

Another testified that monies meant for certain missions such as counterintelligence activities in the state of the nation address (Sona) were handed over to Mahlobo personally.

Mahlobo was also implicated for having overreached his powers by sticking his nose in state security operational matters despite being only meant to play an oversight role as a minister.

Mahlobo said he was being made a “scapegoat” by “rogue” spooks who were entangled in ANC factional shenanigans at the time and wanted to use him as a cover.

Why would this president (Zuma) change a trusted confidante if he wanted to capture the ANC in Nasrec, someone he thought he is so pliable he can do that

Had Zuma trusted him as a “henchman”, he argued, he would never have reshuffled him in early 2017 just months before the ANC Nasrec conference where Zuma's preferred successor — Nkosazana Dlamini-Zuma — lost to Cyril Ramaphosa for the ANC top job.

Mahlobo believes the smear campaign against him was part of one where he was later labelled as Zuma’s lapdog for the controversial nuclear deal when he was shifted to the energy portfolio, adding that he “never signed” a nuclear deal with the Russians.

“Everywhere people may think the former president appointed  dunderheads who were just being used. I was not used, I am a professional, I ran government departments where I got clean audits as an accounting officer. I know administration and I know politics,” said Mahlobo.

“I will not break the law wittingly or unwittingly. This process tells you about people who do funny things and they want to find scapegoats. Everybody who came here it was about President Zuma this, President Zuma that, and these youngsters he had hired.

“Why would this president (Zuma) change a trusted confidante if he wanted to capture the ANC in Nasrec, someone he thought he is so pliable he can do that.”

Mahlobo said there were many honest and upright intelligence officers in the country for a few who make “baseless” allegations against him to be trusted to be telling the gospel truth.

“Because of the toxic environment that is there, only perpetuated by a few, you would have problems. There are fundamental problems there,” said Mahlobo.

“I am clear I know the environment I worked in and the characters and issues they were doing. In intelligence there will always be rogue elements and also politicians who are actually politicking.”

Mahlobo admitted that intelligence was “politicised” but insisted that this did not start during the Zuma years.

But one thing was certain, he charged, no witness had provided evidence of wrongdoing on his part, both at the state capture inquiry as well as the high-level review panel.

About “project commitment”, an intelligence operation that allegedly was about channelling R2.5m monthly for two years from state security coffers for Zuma through Mahlobo, he dismissed it as untrue, saying he could not know whether it existed or not without documentary proof that it did.

“I do not know about that (paying millions to Zuma). Those who say so must know,” said Mahlobo.

“I did receive a brief on this one (project commitment) but to say I approved it, the minister never approves projects in terms of our policies.

“There is a clear mechanism on how monies are handled. In intelligence, there is a tracking system about anybody who requests, who delivers and approves.”

Mahlobo said the state security agency’s own “Project Veza (reveal),” which accused him of involvement in project commitment, was even unreliable to the current minister of intelligence Ayanda Dlodlo, who recently said she would institute a forensic investigation into it.

'You cannot say you recognise somebody when you do not know them.'
Politics
1 year ago

Former National Assembly speaker Baleka Mbete on Tuesday told the state capture inquiry shocking details of how she ignored a whistleblower report on ...
Politics
1 year ago

JUSTICE MALALA | We don’t know if RET faction is a real security threat, because guess what