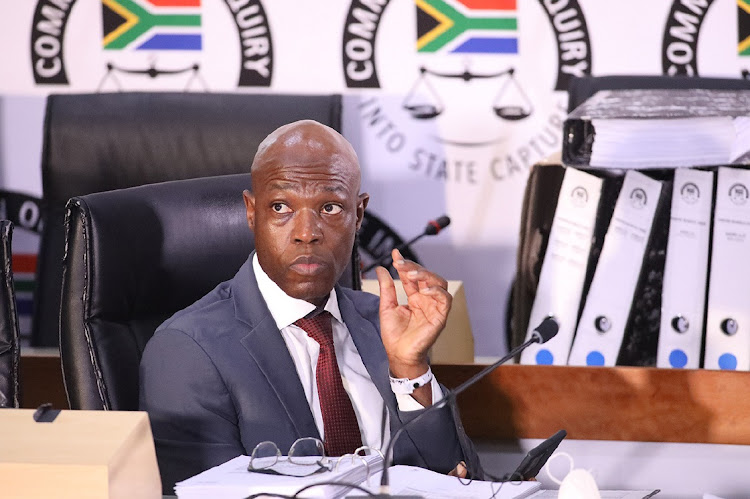 This after Koko hijacked the inquiry, led his own evidence, questioned himself and provided the answers on the controversial replacement of the Glencore-owned Optimum Coal Mine with the Gupta-owned Tegeta as Eskom's coal suppliers.

According to Koko, Optimum had to go as it “kicked me and Eskom on the face” and was intent on using its shareholder — then ANC deputy president Cyril Ramaphosa — to bully the power utility.

It was misguided of the commission, he said, to blame the elimination of Optimum for Tegeta on then Eskom CEO Brian Molefe because Koko, as group technology boss at the time, was the one who championed the process.

“Since Mr Ramaphosa and Glencore took over Optimum on March 26 2012, a host of illegal and irregular activities followed and that included non-payment of penalties up to the tune of R2bn that Eskom was entitled to,” said Koko.

Koko said Optimum, using Ramaphosa as a shield, disregarded terms of the coal-supply agreement that they entered into with Eskom which stated that should an impasse ensue, an aggrieved party should go for arbitration.

Instead, he charged, Optimum opted to place their company in business rescue in an attempt to strong-arm Eskom into agreeing with a proposed coal price hike that the power utility could not afford, of which Glencore wanted to benefit more than R5bn.

Koko said Optimum “kicked me on the face” when they rejected an Eskom board-approved price hike.

It was on August 12 2014, said Koko, that Eskom executives at its primary energy division made a submission to the board to convince them that Optimum could no longer afford supplying coal at Hendrina power station at the agreed price of R154 per ton.

Optimum proposed an increase to R285 per ton.

“The [Eskom] board say to us the current price causing hardship to Optimum is R154 per ton and we are giving you [Eskom executive] to go and negotiate between R196 per ton to R296 per ton and it was an exciting moment,” said Koko.

Koko said this happened due to Eskom's generosity as the company was well within its right to refuse Optimum’s proposed increase because it was outside an agreed contract.

Despite this, Optimum apparently rejected Eskom’s offer and wanted the amount increased to more than R450 per ton before demanding R513 per ton, said Koko.

Commission chairperson deputy chief justice Raymond Zondo chipped in: “It is a very interesting and strange thing. Look at it this way, for instance in the context of a trade union which says we want you to increase the salaries of our employees by 10%.

“And then a division of the employer goes to the board and says we want to resolve this issue. The board says go back, you can negotiate even if it is more than 10% up to 20% but do not come back to us, settle it. All that the employer delegation has to do is to say [to the union] we accept your proposal of 10% and the whole thing is done.”

Koko said Optimum instead made a new proposal for the price to be hiked to R442 per ton of coal supplied.

“This proposal was going to cost Eskom R55bn that Eskom did not have and the associates of Mr Ramaphosa (Optimum) thought they were entitled to it.

This was the moment that broke the camel’s back in the relationship between Eskom and Optimum as no new coal supply agreement could be reached owing to non-affordability, said Koko.

And Optimum, instead of going for arbitration as per the coal supply agreement, went the business rescue route, plunging Eskom into an unprecedented crisis as a search for new suppliers ensued.

“It was not because of state capture reasons or Mr (Brian) Molefe at Eskom. There was no funding for it [Optimum's demand]. The rest is hearsay and politics of the ANC,” said Koko.

If “ke le batla (I want to deal with you) one by one” was a person, it would be former Eskom boss Matshela Koko.
Politics
1 year ago

Former mineral resources minister says he hitched a flight with controversial Gupta brothers from Switzerland to India ‘because he was sick’.
Politics
1 year ago