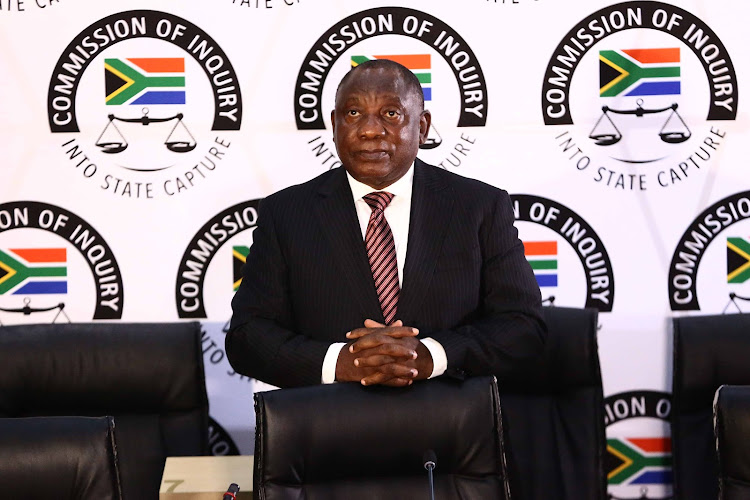 President Cyril Ramaphosa will be the last person to give oral testimony before the commission of inquiry into state capture.
Image: Thapelo Morebudi/The Sunday Times

State capture inquiry chairperson deputy chief justice Raymond Zondo on Tuesday announced that President Cyril Ramaphosa is set to be the last witness to give oral testimony at the commission as the curtain comes down on its work after three years.

Zondo said this was subject “to one or two qualifications” but insisted that “for all intents and purposes” it was time for the inquiry to rest oral hearings.

Ramaphosa will appear at the commission for the second time on Monday and Tuesday next week, wearing his cap as the president of the republic.

But he will also be quizzed on some ANC-related issues that the inquiry could not question him on during his last appearance as a party member.

“The commission is trying its best to finish oral evidence. That is subject to one or two qualifications, I will deal with those when he has completed his evidence.”

Zondo said it “may be necessary” to apply at the high court for a limited extension of the commission's lifespan, but only for it to have ample time to prepare its report which cannot be completed by the end of June as initially envisaged.

President Cyril Ramaphosa’s appearance at the Zondo commission this week was historic, but he still left South Africans with many questions about his ...
Opinion & Analysis
1 year ago

Look the other way, Mbete, and you might be No 1

Raymond Zondo has almost become our quintessential archaeologist, patiently and painstakingly excavating and mining the dirt and dregs from our ...
Opinion & Analysis
1 year ago