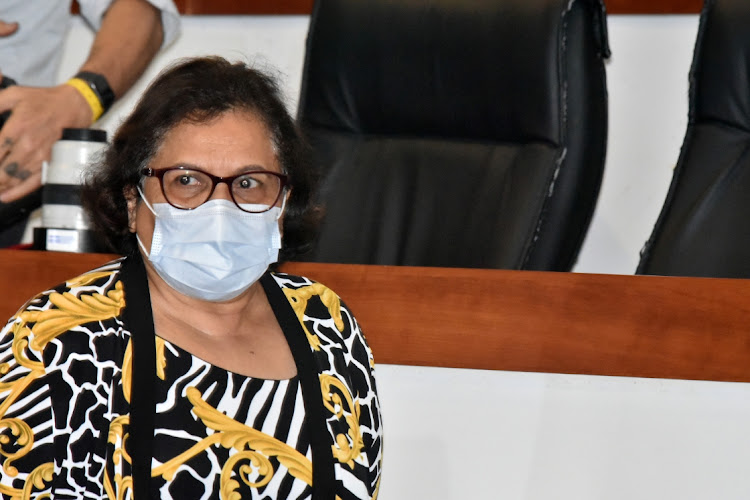 ANC deputy secretary-general Jessie Duarte says the 'founding principle' of the party's step-aside rule is that the integrity of those in positions of power should be beyond doubt or reproach.
Image: Freddy Mavunda

“If they are true, the applicant would clearly be unfit to hold office in the ANC,” she said.

Duarte was answering Magashule’s urgent court bid to have his suspension set aside and the ANC’s “step-aside rule or regime” declared unconstitutional. The regime holds that when an ANC member is charged with a serious criminal offence, they should step aside from their position. If they do not, they may be suspended.

In his founding affidavit, Magashule said the charges against him were “frivolous and unsustainable” and related to wrongdoing about the “implementation of oversight”.

He said he had never heard in the history of SA of a public official facing criminal charges in respect of indirect criminal liability for lack of “oversight”. “It is an oddity, if not a downright absurdity,” said Magashule.

But Duarte, attaching the criminal indictment to her court papers and summarising the charges, says Magashule is accused of being part of a fraudulent R255m contract for the eradication of asbestos in the Free State, as well as several counts of corruption specific to him.

Duarte said it was “not so” that the charges were an oddity.

“The charges are stock standard but serious charges of fraud, corruption and money laundering.”

The ANC's national presenter will also look into the “divisive” behaviour of Magashule, his aide Carl Niehaus and NEC member Tony Yengeni.
Politics
1 year ago

They reflected negatively on his integrity and, by implication, that of the ANC.

She also said that Magashule had mischaracterised his suspension as a disciplinary or punitive step, when in fact it is “a purely preventative provision, designed to serve the best interests of the ANC by suspending people whose integrity has been cast in doubt, pending a process that follows in court proceedings.”

The “founding principle” of the rule was that the integrity of those in positions of power should be beyond doubt or reproach.

They should not remain in office when indicted for criminal offences which cast doubt on their integrity, said Duarte. However the rule was not absolute and only applied to those who had been indicted to appear in court: “It accordingly applies to the applicant but not to the president,” she said.

Duarte also disputed Magashule’s argument that the step-aside rule, as it was being implemented, had been unlawfully distorted from its original iteration in the ANC’s national conference resolution, which said that those accused or reported to have been involved in corrupt activities should, where necessary, step aside.

She said the national conference resolution was not detailed and specific and left it to the NEC to develop and implement.

This is exactly what the NEC did, she said, by creating three categories:

“The applicant’s entire attack proceeds from the wrong premise that the NEC has reduced the national conference resolution by limiting it to people who have been criminally indicted. But that is not so. That is merely one of the categories of people subject to the NEC’s comprehensive step-aside rule,” she said.

ANC will deal with Ace over refusal to apologise for suspension letter: Ramaphosa

President Cyril Ramaphosa says tomorrow's national working committee meeting of the ANC will have to deal with suspended secretary-general Ace ...
News
1 year ago

Embattled former eThekwini mayor Zandile Gumede says she knows nothing about agreeing to step aside in line with the ANC NEC resolution for members ...
Politics
1 year ago

Ace Magashule is asking the high court to uphold the retaliatory suspension he issued to President Cyril Ramaphosa.
Politics
1 year ago