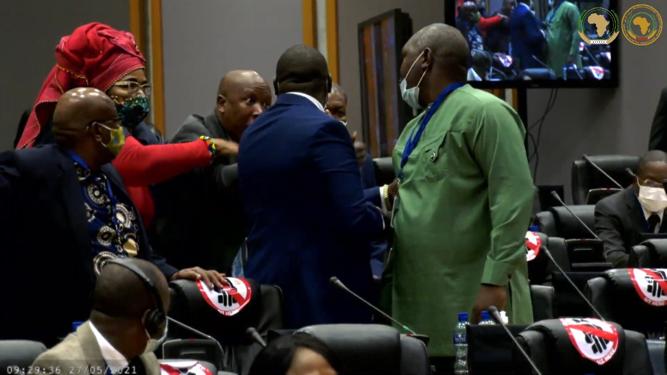 EFF leader Julius Malema was involved in a heated exchange in the Pan-African parliament on Thursday.
Image: YouTube via Pan-African Parliament

“That level of anger and the ‘I will kill you’ utterance is not constructive. It’s in no way uniting Africa.”

This is the remark from one of the people who reacted to EFF leader Julius Malema’s threat towards a member of the Pan-African parliament on Thursday.

During day four of the fourth ordinary session of the fifth parliament, a visibly angry Malema could be heard hurling insults and threatening to kill an unidentified MP.

According to News24, the MP was from the Mali delegation. His comments before or in response to the exchange cannot be heard.

It is unclear exactly what triggered Malema’s comments but he made the threat amid acting pan-African parliament president Fortune Charumbira’s call for the session to be adjourned because of a positive Covid-19 result.

Shortly after the incident, one MP could be heard raising a point of order about Malema’s behaviour.

“There’s an MP who has threatened to kill a colleague. There’s an honourable member who has officially announced he is going to assassinate his colleague after we leave this chamber.”

In the background, Malema can be heard saying: “You're pointing me with a finger now.”

The chaos erupted a day after Malema called out other MPs who he claimed were unruly.

“Acting president, exercise your power, you cannot be held at ransom by hooligans. Don’t be scared of a hooligan, we can deal with him now. We are not here for him. Run this house,” Malema said.

“Why are you scared of this guy? Remove this thing from the house. We are not going to sit here and be bullied by this guy,” he said.

[HAPPENING NOW]: CIC @Julius_S_Malema rising on a point of order.

CIC tells the acting President at the PAP to exercise his powers and not allow to be held at ransom by a hooligan. pic.twitter.com/gmEcIQQBYi

On social media, Malema’s threat drew mixed reactions, with many questioning the reason behind it.

Julius Malema was reckless. That level of anger and the 'I will kill you' utterance is not constructive. In no way uniting Africa

‘What a sorry sight to see’

What a sorry sight to see in the Pan African Parliament - #Malema saying, "I will kill you!", directing those words at another African counterpart. That really came across as #xenophobia and #afrophobia

Julius Malema is a megalomaniac and his boorish antics have now spilled over into the Pan African Parliament. He stands up and tells the members present that they can’t just stand up and shout, hello! That’s what the EFF does at every parliamentary sitting. Hypocrite! https://t.co/HJK9cQIFxm

Julius Malema is shaking some trees there by Pan African Parliament 🤣😂

Malema would make a good Pan African Parliament President and it should end there only. He gets the futuristic vision of unity and support that is currently lacking amongst African countries

Malema: ‘We want black people to live a comfortable life. That is what inspires us’

EFF leader Julius Malema has responded to the members of the KwaZulu-Natal Society of Advocates who slammed the treatment of two judges at the recent ...
Politics
8 months ago

WATCH | Chaos breaks out in parliament over 'Ramaphosa suspension', Mboweni weighs in