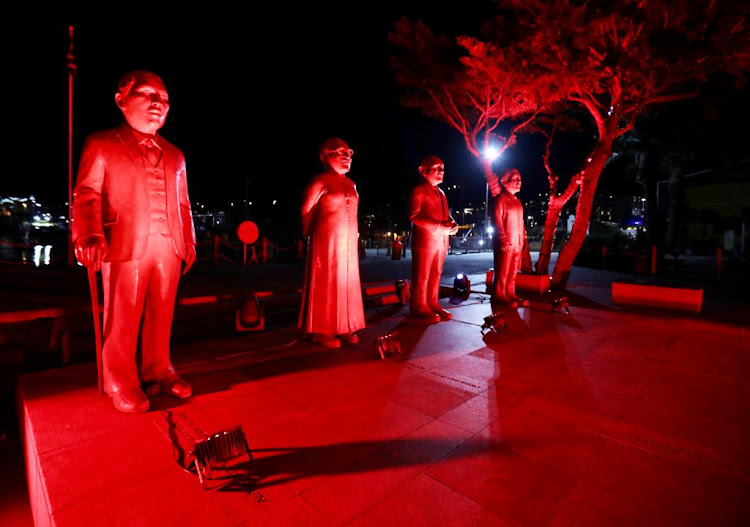 Local artists lit up iconic parts of SA in red to shine light on the devastation brought to the industry by the Covid-19 lockdown. Meanwhile, Gauteng paid two companies, Business Arts SA and Gauteng Sports Confederation, R16.5m to pay grants to 2,201 artists and athletes who were financially hurt by the lockdown. File photo.
Image: ESA ALEXANDER/SUNDAY TIMES

This means that the service providers scored R3.3m more than the actual value of the relief cash they were tasked with distributing.

“It is extremely concerning that two service providers were paid such a ridiculous amount of money, which is higher than the amount individually paid out to artists and athletes,” said Chabalala.

“The jobs of the two entities enlisted to help administer grants must be audited to ascertain exactly how they used the millions of rand that was paid to them. Clearly this Covid-19 relief grant did not benefit the financially struggling Gauteng athletes and artists, but a few individuals, labelled as ‘department stakeholders’.”

The office of the public protector said it will host an alternative dispute resolution session.
News
1 year ago

The department had contracted two companies, Business Arts SA and the Gauteng Sports Confederation, to pay grants of R6,000 each to 2,201 artists and athletes who were financially affected by the Covid-19 imposed lockdown.

The companies, however, scored a combined R16.5m to distribute the relief funds to the artists and athletes — which was more R3.3m more than the funds they were distributing. Business Arts SA was paid R9.9m while the Gauteng Sports Confederation was paid R6.6m.

While making this startling revelation, Hlophe admitted that “a bidding process was not followed” to appoint the two companies as they were “identified as sector stakeholders”.

Chabalala also raised concern that there was no need to hire companies to disburse the funds as this could have been easily done by departmental officials.

“While we understand that these two service providers play a critical role in the careers of artists and athletes, they should not have benefited more than the artists themselves who are the sole beneficiaries of this grant,” said Chabalala.

“The administration of the Covid-19 relief grant could have been done in-house by the officials of the department as a way of saving costs and ensuring that more artists and athletes could have benefited.”

Chabalala said they will push for a full investigation into the matter.

“It is high time that taxpayers’ money is spent wisely to benefit our people who are in dire need of financial support, and not on a few individuals who are directly connected or linked to the department.”

The Sunday Times in February reported that Hlophe’s department had paid artist Dr Tumi R500,000 for a two-hour virtual event a day before the first lockdown in March last year. The event was said to have been watched by only 1,700 people on YouTube.

Hlophe had a month earlier admitted that the department spent R2m on campaigns during the pandemic.

ActionSA leader Herman Mashaba has offered legal assistance to the artists and creatives in sit-in protest at the  National Arts Council (NAC).
News
1 year ago

The Pretoria high court has ordered the artists, creatives, heritage sector workers and cultural workers who have camped outside the National Arts ...
News
1 year ago

The Fugard rose like a phoenix in democratic SA, reports Fiona Ramsay
News
1 year ago