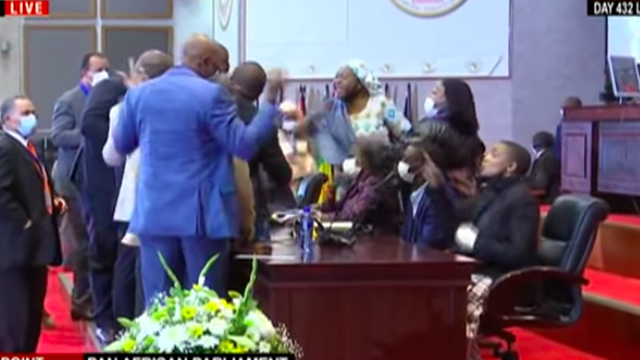 Chaos breaks out during leadership elections at the Pan-African Parliament.
Image: Screebshot

The leadership elections at the Pan-African Parliament (PAP) descended into a fight as MPs argued over leadership voting and whether the presidency should be rotated by region.

The sixth day of the fourth ordinary session of the fifth parliament took place in Midrand on Tuesday, where the parliament was expected to vote on new leadership.

A brawl took place after Jaynet Kabila refused to open the floor to debate, following Julius Malema's point of order.

Malema raised a point of order over a letter concerning the voting procedure.

Malema got out of his seat and made his way towards Kabila, before mayhem broke out.

“You are not in a position to tell us anything. You are nothing in this PAP, you are not elected to be anything. Don't think you can give us any instructions,” an angry Malema can be heard telling Kabila.

The chaos quickly became a battle of women MPs vs men MPs, as many rushed to Kabila's defence while others stood next to Malema.

One female MP can be seen throwing a water bottle.

In a separate video shared by Malema on social media, he can be seen being pushed against the wall by an unidentified MP before other members came and stood between the two.

[In Case You Missed It 🎥]: A member of the Pan African Parliament assaulted our CIC @Julius_S_Malema in the house today.

But we don't kick women in Southern Africa even under deliberate provocation. #PanAfricanParliament pic.twitter.com/4xk9SdHkp6

This is the second time chaos has broken out during the session in parliament.

On Monday, Malema told SABC News his response was triggered by the alleged threat.

“So it was a reaction. When a person says to me 'I will kill you', I can't give him roses.”

Despite the incident, the two gentlemen smoked the peace pipe before the session resumed on Monday.

“We need a United States of Africa. A borderless continent, with one currency and one parliament. A parliament with teeth to bite and hold the executives in Africa accountable. Ultimately, one African president is needed. We are one people,” said the EFF.

Malema breaks his silence: 'When a person says to me I will kill you, I can't give him roses'

Despite the incident, the two gentlemen have smoked a peace pipe.
Politics
7 months ago

EFF leader Julius Malema threatened to kill a member of the Pan-African Parliament on Thursday.
Politics
7 months ago

‘He pulled some Bushiri on us’: Malema’s prediction about lockdown level 2 has the streets in a mess

This is not the first time EFF leader Julius Malema’s hints about lockdown have been correct.
News
7 months ago