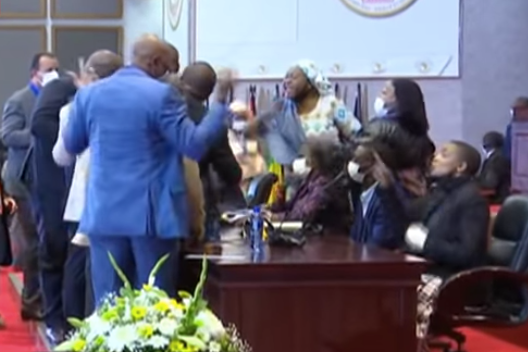 Chaos breaks out during leadership elections at the Pan-African Parliament.
Image: Screenshot

The fourth ordinary session of the fifth Pan-African Parliament (PAP) was suspended on Wednesday, with no resumption date in sight.

This follows chaotic scenes during a debate on the legislature's election process, which led to the collapse of its session in Midrand this week.

At the heart of the divisions was the strong push by Sadc countries for the implementation of a rotational principle in the election of the PAP president, which was meant to be elected during the sitting.

Head of media and communications for the parliament Jeffrey Onganga explains what the sitting had hoped to achieve, what caused the division and what next steps would be implemented by the organisation.

While the chaotic scenes at the parliament this week have been widely criticised as a display of disunity on the continent, Onganga says that such displays are not uncommon in parliaments around the world.

The ANC has come out in support of the rotational rule for the election of the president of the Pan African Parliament.
Politics
5 months ago