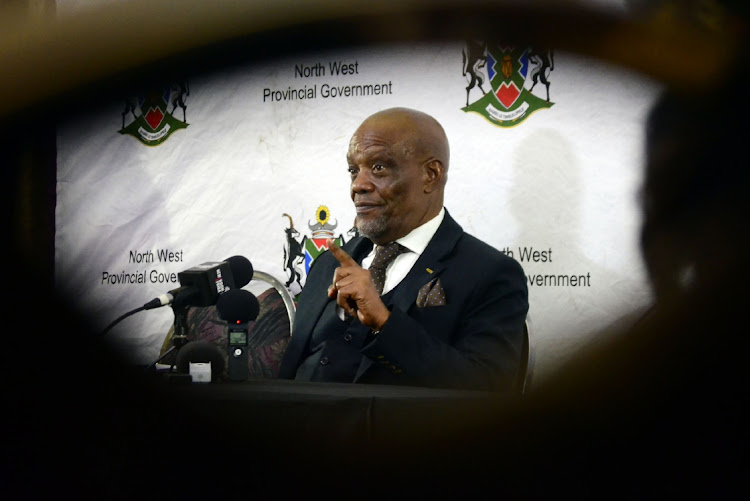 North West premier Job Mokgoro on Monday accused the chairperson of the committee intervening in the province of inciting violence and of unfairness. File photo.
Image: Tiro Ramatlhatse

North West premier Job Mokgoro failed to keep his cool on Monday as he lashed out and accused China Dodovu, the chairperson of parliament's ad hoc committee on the section 100 intervention in the province, of inciting violence and of unfairness.

Mokgoro expressed the sentiments after community members accused his embattled government of failing to execute its mandate to provide services.

The premier accused the committee of not being transparent in its dealings, saying it failed to disclose that they would bring community members to be part of Monday's meeting. He argued that the community members needed to be verified before their submissions could be recorded.

“Let me ask you humbly, don't incite communities because your comments actually are tantamount to inciting. With the greatest respect, we are leaders, you cannot be sitting here and saying things that would give justification for members of the community to get incited and bring about instability,” he said.

Former North West premier Supra Mahumapelo was kicked out of a parliamentary meeting meant to discuss government's section 100 intervention in that ...
Politics
11 months ago

“I just want to tell you that this is the most unfair oversight I've ever experienced. But I think, honourable chair, we as the provincial government, your community need to come back to these issues. We need to discuss very thoroughly your approach to oversight.”

Dodovu was hesitant to respond to the allegations, which he noted as serious.

ANC MP Maurencia Gillion came to his defence, and slammed Mokgoro. She said the committee had been established to conduct an oversight and come up with a report to parliament.

“I am very disturbed that [the] premier can pose such serious allegations against the chair. We are not here to score political points. We are here to oversee a very, very serious investigation in our oversight role as MPs.

“It is unfortunate that the chairperson of this committee is originating from the North West, and I want to plea with the leadership in the North West to please see the role of our chairperson as independent. It is under very difficult circumstances that he's trying to do his job. If the chairperson was from another province, I doubt if such outrages would come forward,” she said.

The committee on Monday received two presentations from the provincial government;  one from Mokgoro's office and another from administrators who gave an overall report on the state of all the municipalities in the North West.

The report shows that the province has few functional municipalities, including Rustenburg, greater Taung and Matlosana. Meanwhile, the majority of the municipalities were either partially functional or not functional at all.

Water authority Sedibeng Water has taken aim at a North West district municipality, saying it was suspending all "operations and maintenance ...
News
11 months ago

On financial management and viability, the administrators said municipalities had serious financial challenges which threatened their sustainability and service delivery. Most municipalities were said to be unable to collect revenue for various reasons. Some of them were said to have no billing systems, were not conducting meter readings and, in some instances, there were no meters or they were vandalised.

On political instability, which has seen municipalities such as Motlosana, Madibeng Ditsobotla and Kgetlengriver operating with parallel governance structures, the administrators said they had observed infighting contributing to community protests and resistance to provincial interventions and removal of administrators.

The provincial government, however, said it had made significant steps in cleaning up the province.

These included the establishment of “Working Coghsta” (co-operative governance, human settlements and traditional affairs), a rapid response task team (RRTT) to deal with community protests and a new co-ordinated approach to provide support to all 154 municipalities.

North West premier Job Mokgoro has vowed not to recognise a decision by the ANC interim provincial committee to suspend his party membership.
Politics
1 year ago

The ANC Free State Interim Provincial Committee has vowed that the time for impunity is over.
Politics
11 months ago