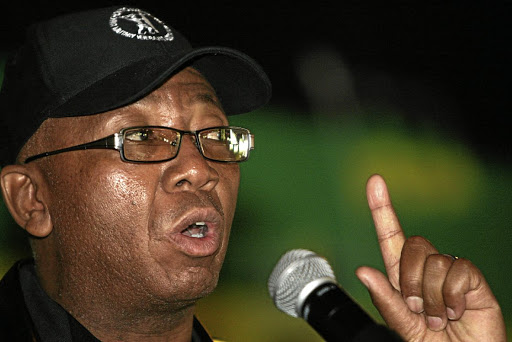 Talks between the ANC's top officials and leaders of the two bodies representing ex-combatants of armed wing uMkhonto weSizwe collapsed on Monday over the decision to disband the two organisations.

President of the uMkhonto weSizwe Military Veterans Association (MKMVA) Kebby Maphatsoe has accused ANC national chairperson Gwede Mantashe of bullying tactics and of allegedly ending a virtual Zoom meeting abruptly when the ANC top six leaders — who include President Cyril Ramaphosa — were pressed for reasons for the disbandment.

Maphatsoe is now threatening to challenge the disbandment of the MKMVA in court.

“It is not a question of maybe, we are going to challenge this in court,” he told TimesLIVE.

He revealed that in his opening remarks, Ramaphosa spoke about how this year marked the 60th anniversary since the formation of uMkhonto weSizwe, that it was an important year in the history of that organisation and that it needed cadres that were united.

“But because you are not united, we have decided to disband you and we expect you to take this thing in a very disciplined way as disciplined soldiers,” Ramaphosa told the meeting, according to Maphatsoe.

Maphatsoe claims that when he and his deputy, Taylor Nsimbini, insisted on reasons for the disbandment, no answers were forthcoming.

“When we started asking questions, Comrade Gwede said, 'No, this is an instruction, we are not going to discuss it.

“We said, 'No, you called us and we want to understand so that when we explain to our members, we give them reasons why we were disbanded,'” said Maphatsoe, giving his version of what happened at the meeting.

He continued: “We said if you can't give us reasons, we don't agree with the disbandment and, anyway, we will meet in court because we are not in the constitution of the ANC.”

Speaking to TimesLIVE, he said: “In the manner that the national chairperson Mantashe was chairing the meeting, he was [a] bully and he didn't allow us to put our facts and we were expecting them to give us the reasons why they were disbanding us.

“When we were asking those questions, he did not allow us to ask questions after the president had spoken. He said, 'No, this is an instruction, the meeting is closed.'”

He said when the MKMVA leaders insisted on getting answers, the meeting became “uncontrollable” and they were kicked out.

“You see, when you are virtual, you are at a disadvantage. If it was physical, we would have come out with a better solution today,” said Maphatsoe.

He accused the ANC's top six officials of being factional and siding with the MK national council. The council withdrew from unity talks, which are part of the build-up to the so-called “unity conference”.

Maphatsoe said that instead of disciplining the structure for walking out, the ANC was punishing both structures.

He said the MKMVA had done everything the ANC had instructed it to do in preparation for the unity conference, and had been submitting regular reports to the ANC without any problems.

Maphatsoe said they will be meeting with their provincial structures this week, and will also begin legal proceedings against the ANC decision.

MK national council secretary-general Gregory Nthatisi, who was also part of the meeting, had a different take to Maphatsoe. He suggested that the ANC leadership did not owe them an explanation.

The council is seen as supportive of the Ramaphosa-supporting faction of the ANC.

“What came to us was simply a resolution of the NEC, through the officials, to inform us about the position that has been taken. It did not warrant a discussion, to be honest.

“We are a baby of the ANC as MK; we take our tune and instructions from the ANC. We have got no mandate to make statements outside the ANC especially on policy matters and we also do not have the power to want to go toe to toe with the NEC on decisions they've made,” he told eNCA.

ANC national spokesperson Pule Mabe had not responded to a request for comment at the time of publication.

The ANC’s top six officials should be reprimanded by its NEC for ordering MPs to vote in favour of a parliamentary process to test the public ...
Politics
1 year ago