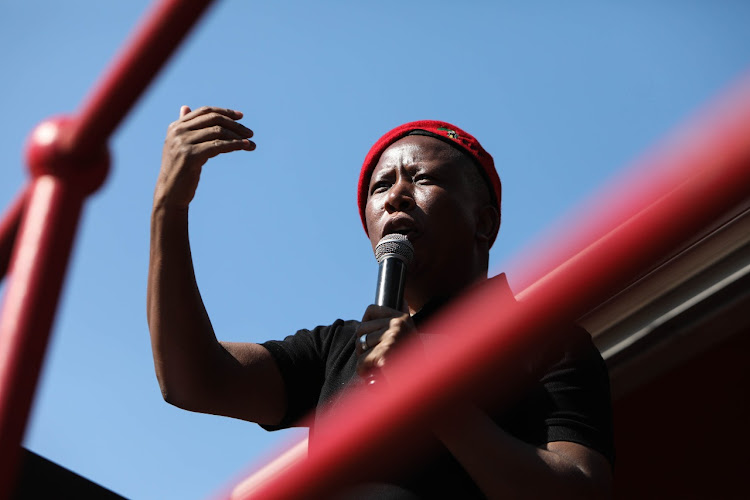 EFF leader Julius Malema told supporters at a Youth Day rally on Wednesday the country’s youth had nothing to celebrate as unemployment statistics had reached an all-time high of 64%.
Image: Alaister Russell/The Sunday Times

This call came just hours after President Cyril Ramaphosa announced the country would move to level 3 lockdown regulations during a third wave of Covid-19 infections. The regulations include restrictions on indoor and outdoor gatherings.

The red berets, however, slammed the move and forged ahead with the party’s Centurion rally, which was attended by scores of people. This while other political leaders opted for virtual gatherings.

“The Russians have offered vaccine but they refused it. We want our country back. Let us go and reclaim our country from Ramaphosa. If it means death, so be it. If it means prison, we will wait with honour because prison for revolutionaries is an honour. Only cowards will be scared of prison,” he told supporters.

He said the country’s youth had nothing to celebrate as unemployment statistics had reached an all-time high of 64%. To rectify this, the economy needed to be opened and the nation vaccinated, according to Malema.

“Let’s take the war to this guy [Ramaphosa]. We gave him a chance for far too long. We have tolerated his nonsense for a very long time. We declare today, here and now on June 16, the same way the youth of 1976 said enough is enough, we will confront this government and protect our youth,” he said.

Malema was speaking outside Uitsig Secondary School, where a pupil was recently assaulted for wearing the party’s regalia. He said this was a shame 25 years into democracy.

“This place is not a school. It is crime scene because racism is a crime,” he said.

Malema also used the rally to launch an attack on the SA Health Products Regulatory Authority (Sahpra). He said his members would protest at the homes of those responsible for vaccines.

“This Friday, we are at Sahpra because we want vaccines. Failure to respond in seven days, you must find the address of the home of the CEO of Sahpra. It is personal like that. There will be a sleep-in at his house until vaccines are provided by this government.

“If there is something they want to do, they must do it. Let us not be scared of these people. Let us fight for our rights,” he said.

Malema said these attempts were tantamount to saving lives and would reward the current generation.

“Our generation will be saluted by the next generation, that we saved lives when it was not fashionable to do so,” he said.

Malema pinned the death of Hector Peterson during the 1976 Soweto uprisings on the ANC for failing to arrest those behind his murder.

“Why are they refusing to prosecute those who killed our people and they claim to be a movement that won our liberation. The ANC today has never prosecuted a single apartheid murderer,” he said.

President Cyril Ramaphosa on Wednesday outlined a number of interventions government plans to use to address the country's dismal youth unemployment ...
Politics
11 months ago

YOUTH SPEAK | ‘It’s similar to how it was before Covid-19, but we can’t hug our friends in the morning’

My matric year was really tough but it was an interesting journey, writes Thobeka Mkonza from Bergville in KZN, who is now studying physiotherapy at ...
News
11 months ago