Defying lockdown rules at court, supporters vow to fight to the bitter end 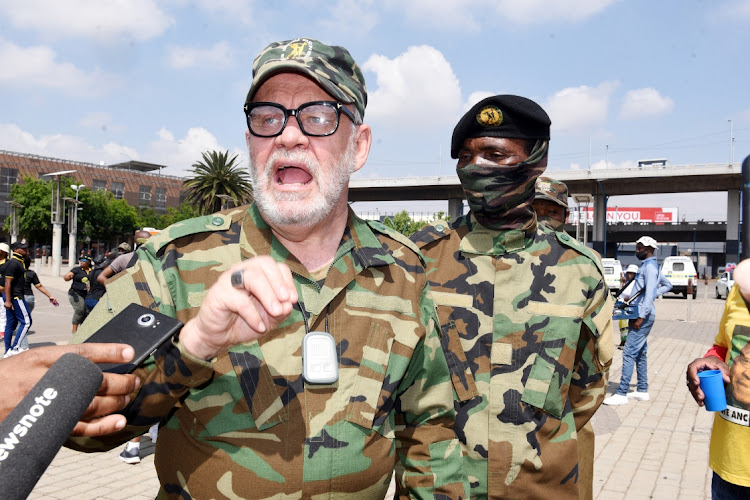 'What is at stake is the integrity of the ANC,' Carl Niehaus said on Thursday in support of Ace Magashule's attempt to challenge the legality of the party’s step-aside resolution. File photo.
Image: Freddy Mavunda

Supporters of suspended ANC secretary-general Ace Magashule maintain that no court can remove him from his position — and that only an elective national conference can.

Magashule is fighting for his political life in court, seeking to challenge the legality of the party’s step-aside resolution.

Scores of his supporters — mainly from Gauteng, the Free State and KwaZulu-Natal — gathered in solidarity outside the South Gauteng High Court on Thursday, in contravention of level 3 lockdown regulations.

Magashule is the highest ranking official to be affected by the resolution adopted at the party's 54th conference. His supporters argue the party was inconsistent in adopting the resolutions, saying he had been targeted.

MKMVA spokesperson Carl Niehaus said: “Our call today is that democracy must prevail. Comrade Magashule was elected at the 54th national conference of the ANC by the majority of the delegates. It is democracy that decided Ace is the SG. No-one can remove Ace from his position except for another national elective conference.

ANC president Cyril Ramaphosa and deputy secretary-general Jessie Duarte could not “simply strut along” and file their court papers late without ...
Politics
1 year ago

“We know what is happening on the ground. We know that if a national conference was to be called now, comrade Ace will emerge victorious. Those who want to remove him will be shown democratic flames.”

Niehaus said he'd had an opportunity to speak to Magashule at a venue where he and his legal team had gathered, and “he is in good spirits”.

He warned that though Magashule was confident he would emerge victorious, the integrity of the party was compromised.

“What is at stake today and tomorrow is the integrity of the ANC. We are deeply concerned that the ANC cannot continue to be a factional and divided organisation. We need Ace to go back to his position at Luthuli House,” he said.

Ordinary supporters vowed to support Magashule until the bitter end.

“We know Magashule, we know the fruit of his leadership. So we are here to say he must stand tall, we will stand with him until the end,” said one.

Isaac Mokolwane, representing religious structures in the Free State, expressed similar sentiments: “I will die when Ace dies, that I can declare.”

Mokolwane railed against the presence of law-enforcement officials at the protest and the “exaggeration” of the Covid-19 crisis in Gauteng.

“It was just to stop us from coming here. We will not be told what or what not to do. Let them come and shoot us, but we will stand for the truth,” he said.

Niehaus tried to change the tone from “dying with Magashule” to calling for unity in the party.

“All of us love the ANC, but we want a united ANC. We are hoping and praying that this court case will bring about clarity,” he said.

“We want to make sure that he is back at Luthuli House, where we placed him, so he can lead the ANC. The ANC needs Magashule for its campaign ahead of the local government elections.”

Suspended ANC secretary-general says the party's national working committee jumped the gun and suspended him in an 'absurd and unlawful' manner.
Politics
1 year ago

ANC treasurer-general Paul Mashatile says the party will leave no office untouched in reducing its bloated salary bill, including a possible ...
Politics
1 year ago