The Covid-19 variant spreading across SA is much more contagious and causes more severe symptoms than the previous variant of the coronavirus in SA, President Cyril Ramaphosa said on Sunday night.

“We have walked a long road to deal and to address Covid-19 and we have been climbing many hills. We have made some missteps along the way but we have been climbing. As a country we have faced two devastating waves of coronavirus infections. We have overcome these by responding swiftly and decisively by acting together to contain the spread of the virus and to protect ourselves, our families and our communities. We now face another challenge, which is another hill to climb,” said Ramaphosa.

He was speaking as the country faces a third wave of Covid-19, which has mutated from the Beta to the Delta variant, affecting five provinces so far — the Eastern Cape, the Free State, Gauteng, KwaZulu-Natal and the Western Cape.

“SA is seeing a massive resurgence of infections.

“We are concerned about the rapid spread of this variant ... It is easier to catch this variant.”

To date, the African Union member states have reported more than 5.2-million cases and more than 138,000 deaths from Covid-19, said Ramaphosa.

“The Covid-19 virus that descended on our country in March of last year has been continuing to mutate, creating new variants.

“Our scientists tell us that Covid-19 has many variants. Last year we experienced what they called a Beta variant. In addition we now have a Delta variant. This variant was first detected in India at the end of March of this year and is now found in 85 countries around the world.

“The evidence we have is that the Delta variant is rapidly displacing the Beta variant which has been dominant in our country until now. We are concerned about the rapid spread of this variant. First because it is more transmissible.

“As of today, the seven day average of new daily cases nationally has overtaken the peak of the first wave in July last year and will soon overtake the peak of the second wave we experienced in January of this year.

“Gauteng now accounts for more than 60% of new cases in the country. With the exception of the Northern Cape and the Free State, infections are rising rapidly in all the provinces.

“The first wave lasted 15 weeks. The second wave lasted nine weeks. We don’t know how long this one will last, but indications are that it could last longer.” 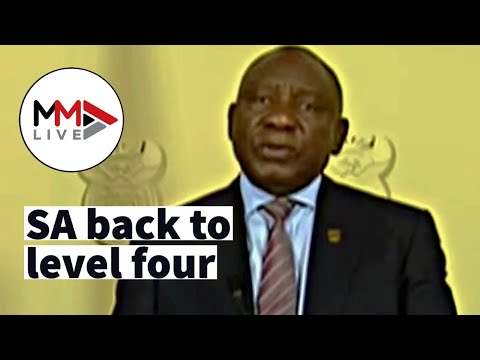 Ramaphosa's comments come after an expert briefing to the national coronavirus command council (NCCC) at the weekend, which highlighted a surge in infections attributed to the Delta variant, first identified in India. Globally, the strain is reportedly causing more severe sickness and hitting younger people particularly hard.

Gauteng, the epicentre of the third wave, has seen record-breaking levels of infections over the past week, putting hospitals under strain. Acting health minister Mmamoloko Kubayi warned on Saturday that data was showing that “other provinces are going to experience the trend we are seeing in Gauteng, notably in the Western and Eastern Cape”.

On Sunday evening, the National Institute for Communicable Diseases said there are 158,998 active cases in the country with 15,036 new cases reported in the latest 24-hour cycle. This increase represents a 26.9% positivity rate.

Gauteng accounted for the majority of new cases (66%), followed by the Western Cape (9%).

A further 122 Covid-19 related deaths have been reported, bringing the total number of fatalities to 59,900.

An increase of 361 hospital admissions have been reported in the past 24 hours, said the NICD.

SA has vaccinated more than 2.68-million people so far, since beginning with healthworkers and the elderly. The education sector is also on track to finalise its inoculations within 10 days.

From Thursday July 1, SA is opening up vaccine registration to citizens that are 50 to 59 years old, and these inoculations will begin from July 15.

J&J, she said, had so far delivered 500,000 early access doses used for Sisonke, 300,000 market doses earlier this month and 1.2-million doses which landed on Thursday night. “These [single shot] doses all need to be used by August 11. We are awaiting confirmation for delivery of 500,000 doses [which expire later] and this then makes up the 2-million to replace those that were lost to the contamination incident [in the US].

“With this flow of vaccines, we will be able to press ahead with the vaccination of frontline workers sector by sector. We will then move on to workplace vaccinations — both formal and informal sectors like the taxi industry,” said the minister.