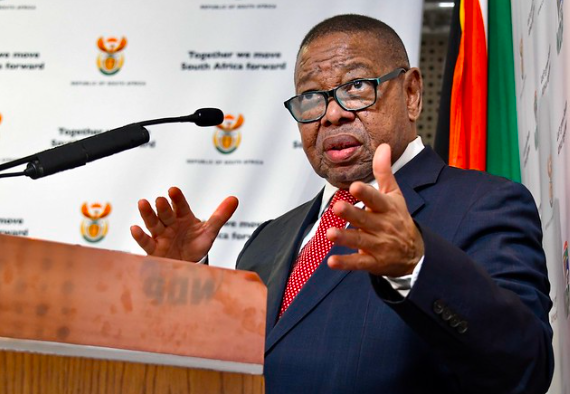 Blade Nzimande says a funding crisis already exists within public colleges, which are funded at about 62% instead of 80%. File photo.
Image: GCIS

SACP general secretary Blade Nzimande has warned against the incitement of civil war, as often chaotic scenes played out in Nkandla this week.

Nzimade also called on law enforcement agencies to investigate and bring to book those who fired gunshots in the “anarchy” outside former president Jacob Zuma's home.

Without mentioning Nkandla or Zuma directly, Nzimande also called on “the real” Umkhonto we Sizwe military veterans to distance themselves from the use of their association’s name in what he called “counter-revolutionary conduct”.

He said the constitution was not something any person or grouping could be allowed to gamble with or undermine, and that no person was above the law.

“We strongly condemn the groupings and individuals who are inciting violence to undermine our constitution. As things stand, we have not recovered in every respect from the consequences of apartheid violence, including the violence the apartheid regime sponsored through its surrogates,” said Nzimande.

“Never again must any person be allowed to return us to the dark past we experienced.”

Nzimande called on the leaders, former leaders, and members of any formation in the ANC-led broader movement —  in whose name “reckless elements are inciting violence” — to distance themselves from such treachery, counter-revolutionary conduct.

“We call upon all leaders not to allow their names to be used in calls for violence,” he said.

He condemned what he said was the abuse of the name of the joint ANC and SACP liberation army, uMkhonto weSizwe (MK), which was dissolved in favour of a transition to democracy, establishment of, and integration into the SA National Defence Force.

He said the gunshots spread by “elements” inciting violence should be condemned in the strongest terms and investigated thoroughly. Those responsible should be brought to book, he said.

“No stone must be left unturned in defending our democracy.”

Nzimande said the supremacy of the constitution and the rule of law have to be protected.

“Our constitution is a product of our liberation struggle, during which we lost many lives as a result of violence by the colonisers, the apartheid forces, and their surrogates.

“We value each life equally that we lost, before and even after 1994, and both in and outside our country.

“We lost, among others, the life of our own general secretary, comrade Chris Hani. His assassins aimed at perpetuating apartheid. With the sterling leadership of our movement, the masses rejected the invitation to a civil war, more blood shedding,” said Nzimande.

Former president Jacob Zuma addressed the media at his homestead in Nkandla on July 4, 2021. Zuma said his prison sentence was, in effect, a death sentence as his poor health and the risk of Covid-19 could lead to his death inside a jail cell.

He said MK veterans would not go around carelessly inciting violence and mobilising to undermine the very hard-won democratic transition that they fought for.

“Let the name of the MK not be allowed to be used to pursue what essentially is a counter-revolutionary agenda. We say this because we know what war is.

“Masingadlali ngempi, ngoba impi iyabulala,” he said in isiZulu. This translates to “let's not play with war, because war is deadly”.

Nzimande reiterated the SACP's support for the Zondo commission, saying that once the commission has concluded its work, state law enforcement, including prosecution authorities, should follow up on the report.

“Those who were responsible or complicit in the corruption investigated by the commission must be held to account. We therefore expect consequence management, including through prosecution and asset forfeiture,” he said.

The SA National Defence Force (Sandf) has rubbished claims that it has deployed soldiers to Nkandla to confront supporters of former president Jacob ...
Politics
1 year ago