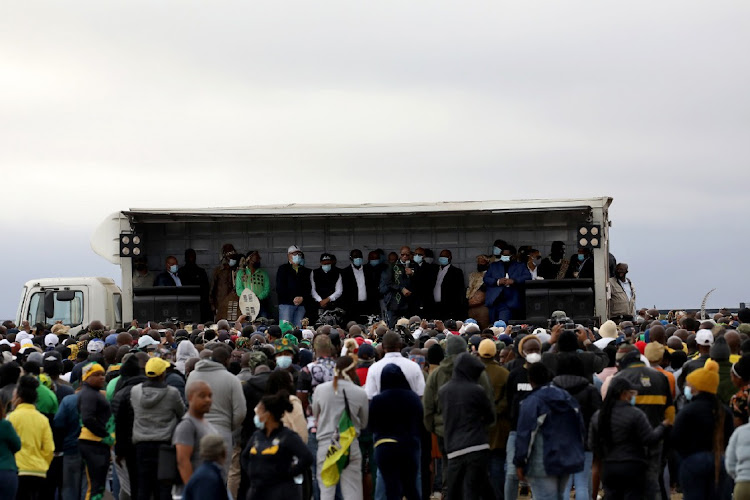 The ANC's special national executive committee meeting has rejected a proposal for the establishment of a special task team on former president Jacob Zuma's legal matters.

The idea was sponsored by Zuma's supporters.

“It was roundly rejected,” said an NEC member, who spoke on condition of anonymity.

The proposal was apparently made after the KwaZulu-Natal ANC's provincial leadership tabled a report in which they called for the reinforcement of NEC deployees to the province.

“They mentioned a lot of things happening in the province, including how there is this group of military veterans that has been disruptive and shutting down highways, among other things. They also spoke about the influx of foreign nationals from Eswatini due to the turmoil in that country and they were saying because so much was happening in the province, they needed more NEC deployees to calm the situation,” said the source.

It was seemingly in response to this proposal that Zuma's supporters called on the party to establish a task team to deal with issues around the former president. It was not clear, however, when they were questioned what, exactly, would the task team do, according to the source.

“They were told the Zuma matter is in court,” said the source.

Another NEC insider said: “There was some silly proposal that there be a task team set up that will deal with Zuma and all of the shenanigans, but people questioned why we need a task team, that you don't need a task team. All you need is the NEC deployees to be reinforced in KZN. We said Nkandla is not the only problem that we have in the country or in the province.

“There was really no substance to [the] proposal. That proposal was shut down; it didn't even gain momentum.

“There was also some flirtation to say that because Zuma is old and that the sentence is harsh but that was turned down.”

ANC policy guru Joel Netshitenzhe allegedly suggested at the start of the meeting that they should not discuss details of the Zuma case.

“He said we cannot go into the nitty-gritties of the case because we are not lawyers, and that there is a court process. Ours as the organisation is to reaffirm our support for the rule of law and all the institutions of the country. We must not try to turn an NEC meeting into a hearing or a trial,” Netshitenzhe reportedly told the meeting.

The source said this was the response given to anyone who tried to venture into the law.

Sources said the meeting was attended by former president Thabo Mbeki but he did not speak.

When Zuma logged into the meeting, sources said ANC national chairperson Gwede Mantashe asked that he should not be allowed to participate since he was the subject of discussion. After a brief appearance, Zuma left the meeting, according to sources.

In the main, according to one source, the speakers condemned what had happened outside Zuma's home, speaking in general terms.

Angry acting health minister Mmamoloko Kubayi apparently spoke out against the Nkandla gathering, calling it “a super-spreader event” — and saying that it will be difficult to convince other South Africans to comply with regulations after the event.

Kubayi allegedly also criticised the postponement of the NEC meeting which was to start on Friday.

She said what happened in Nkandla did not need a cancellation of the meeting and that no clear leadership was provided after the cancellation, according to a source.

“She said we must not create an impression that KZN ANC members have a special membership of the ANC that when they sneeze, the whole country comes to a standstill,” said the source.

ANC president Cyril Ramaphosa is said to have slammed what transpired outside Zuma's home on Sunday, telling the meeting that what happened at Nkandla was well orchestrated.

Ramaphosa was delivering his political overview at the conclusion of the special meeting after a weekend at which Zuma's supporters threatened political violence over  his impending arrest.

The looming arrest stems from a Constitutional Court judgment last Tuesday that found that him in contempt of court by failing to obey a Concourt order that instructed him to appear before the Zondo commission of inquiry into state capture.

The Umkhonto we Sizwe Military Veterans Association (MKMVA) press briefing at the entrance of former president Jacob Zuma’s home degenerated into chaos and was stopped prematurely on July 2 2021 after supporters intimidated members of the media.

Zuma has vowed that he won't allow himself to be sentenced to jail over the matter after the Concourt sentenced him to 15 months  for contempt for failing to give evidence before the Zondo commission.

His supporters have spent the whole of the past week demonstrating outside his Nkandla homestead, threatening political violence over his  arrest.

But, sources said, Ramaphosa lambasted the threats of violence and the conduct of Zuma's supporters at Nkandla.

“He said that what happened at Nkandla was well orchestrated from within the ANC, from people who want to project that the ANC will collapse if certain things happen,” said one source. “He said what happened in Nkandla does not represent a popular uprising and the ethnic chauvinism that was displayed must also be condemned.

“He commended the police for how they have acted because people wanted to provoke acts of bloodshed.

“The president said we must never question the sacredness of the constitution and the Constitutional Court.”

Ramaphosa is also said to have called on the NEC to endorse a decision of the national working committee, which is in charge of the party's day-to-day affairs, to disband the military veterans association MKMVA.

The MKMVA has been one of the ANC structures lending support to Zuma.

SACP general secretary Blade Nzimande has warned against the incitement of civil war, as often chaotic scenes played out in Nkandla this week.
Politics
1 year ago

WATCH | Zuma, Duduzane and Ace speak outside Nkandla after days of protests

Thousands gathered outside Jacob Zuma's Nkandla homestead to show their support for the former president on Sunday.
News
1 year ago

If the ANC does not shut out Zuma, any semblance of what’s left of the rule of law and the economy will be destroyed
Opinion & Analysis
1 year ago