I feel for Zuma but he's not the first leader to be sent to jail, says 'troubled' Buthelezi 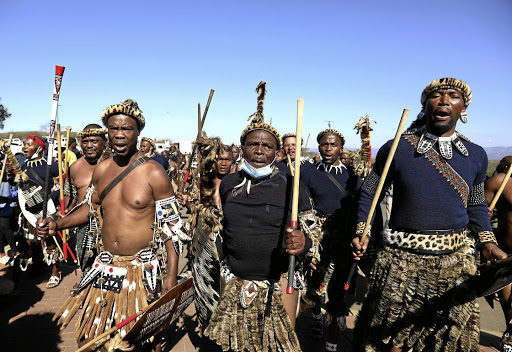 Amabutho at Nkandla at the weekend to show their support for Jacob Zuma.
Image: Sandile Ndlovu

The traditional prime minister of the Zulu nation, Prince Mangosuthu Buthelezi, has described the events that transpired at the home of former president Jacob Zuma at the weekend as treasonous.

This after thousands of supporters gathered at Zuma's Nkandla homestead to offer their support after Zuma was issued a 15-month jail sentence. Many of them were reportedly without masks and barely observed social distancing.

Buthelezi slammed the flouting of lockdown regulations as the country battles the third wave of the Covid-19 infections. He said the actions of Zuma's supporters were irresponsible and a challenge to the state.

“In this time of great reflection for our nation, we consider what is going on at Nkandla as treasonous. With all due respect for the sympathy people may have for Mr Zuma’s plight, challenging the state and risking lives is unacceptable,” he said.

Former president Jacob Zuma on Sunday dismissed several questions about his supporters gathered outside his home in KwaZulu-Natal without observing ...
News
4 months ago

Buthelezi said he was speaking in his capacity as one of the few remaining elders after serving the country for more than 60 years.

“As one of the few remaining leaders of the generation who fought for freedom, I fear that God will judge me harshly if I keep silent as people destroy this country’s future. They are creating a future of poverty and death for the youth of South Africa. I dare not keep silent.”

He said he sympathised with Zuma, who was now facing the consequences for his actions.

“I sympathise with Mr Zuma’s family in this difficult time. Any lawyer would have known the consequences awaiting the former president if he refused to comply with the Constitutional Court’s order to appear at the state capture commission.

“Mr Zuma’s lawyers let him down and he is now facing the consequences. I am not judging his case, but I sympathise with his plight, for he is still an elder facing a very difficult prospect.”

What is happening in Nkandla right now runs contrary to our dignity as a people. We are making ourselves a spectacle in the eyes of the world.

He further slammed the outrage and threats of “uprisings” if Zuma was sent to jail, saying he was not the first leader to be sent to jail.

“This is not the first time that a leader in our country has faced imprisonment, or worse. History provides us with many examples. But history also shows us how those leaders acted in the face of trial — even unjust trial — and how their people acted in response.

“What is happening in Nkandla right now runs contrary to our dignity as a people. We are making ourselves a spectacle in the eyes of the world.”

Buthelezi made reference to the vanquishing of the Zulu Kingdom by the British in 1879 where his great grandfather, King Cetshwayo, was arrested and exiled. “Yet when King Cetshwayo was arrested and sent into exile, neither the king’s regiments nor his people threatened a physical uprising, for it would have been hopeless and ended in utter destruction.”

He also made reference to King Cetshwayo’s son who walked in the same steps as his father. “King Dinuzulu was found guilty of high treason in 1889 and was exiled by the British to the island of St Helena. The Zulu regiments were mighty at that time, but the king submitted himself willingly to arrest, like his father. There was no uprising ...

Amabutho warriors joined MKMVA veterans in pledging their undying support for former President Jacob Zuma and have vowed to protect him.

“And in 1964, when we were deprived of the cream of our liberation leaders — Mandela, Govan Mbeki, Sisulu and the other Rivonia trialists — we did not contemplate a physical revolt.

“With all of this history, I am troubled by what is happening at Nkandla. It is simply wrong. Our people there are challenging the state and in so doing they are challenging all of us who are guided by the rule of law,” he said.

Buthelezi further slammed the presence of regiments of amabutho (traditional Zulu warriors) at Nkandla, saying such a move was not sanctioned by him or the Zulu royal family, adding it was a clear act of defiance.

Police had learnt a lot from Marikana and used "suggestions" from the resulting Farlam commission, minister Bheki Cele said on Monday.
News
4 months ago

The Pietermaritzburg high court is expected to hear an 11th hour application by former president Jacob Zuma to stop the police arresting him ahead of ...
News
4 months ago

Inquiry secretary Prof Itumeleng Mosala has labelled an 11th hour bid by former president Jacob Zuma to stay a warrant for his arrest as a ...
Politics
4 months ago