Family member tells TimesLIVE that former president Jacob Zuma left Nkandla voluntarily “to avoid bloodshed and violence that would occur at the gate”.

Former president Jacob Zuma’s foundation confirmed that he was on his way to “hand himself over” to prison authorities after he left his Nkandla homestead in a large convoy of vehicles just before midnight on Wednesday July 7 2021.

While some of former president Jacob Zuma’s family members are reeling in shock after his surprise decision to hand himself over for imprisonment on Wednesday night, some simply accepted that this was the end of the road for the man who once sat in the highest seat in SA.

Zuma’s cousin, KwaZulu-Natal businessman Deebo Mzobe, said: “There is nothing more we can do about the situation. We just have to accept the situation for what it is and hope that it will blow over very soon.”

Police confirmed that the former president was in custody after handing himself over. He was expected to be transferred to a correctional services facility in KwaZulu-Natal in the early hours of Thursday morning.

The Constitutional Court last week found Zuma guilty of contempt and sentenced him to 15 months' imprisonment. He was given until Sunday to hand himself over, failing which police were given until midnight on Wednesday to make an arrest.

As the Wednesday deadline loomed, a handful of supporters — led by Zuma's son, Edward Zuma — gathered at the gates of the family's Nkandla homestead and vowed that they would not let him be taken into custody.

However, at about 11.15pm, a convoy of vehicles, some with Presidential Protection Service logos on the doors, left the homestead. It wasn't long after this that police and the Jacob Zuma Foundation confirmed that Zuma was officially in custody.

Mzobe told TimesLIVE in the early hours of Thursday: “We are OK, because at least he handed himself over and no-one was hurt in the process. We were worried about the activities that were taking place outside the gate, but we are OK now. It is what it is. That is the world that we are living in.”

Zuma's older brother, Khanya, was at a loss for words and asked to rather be interviewed later on Thursday morning. 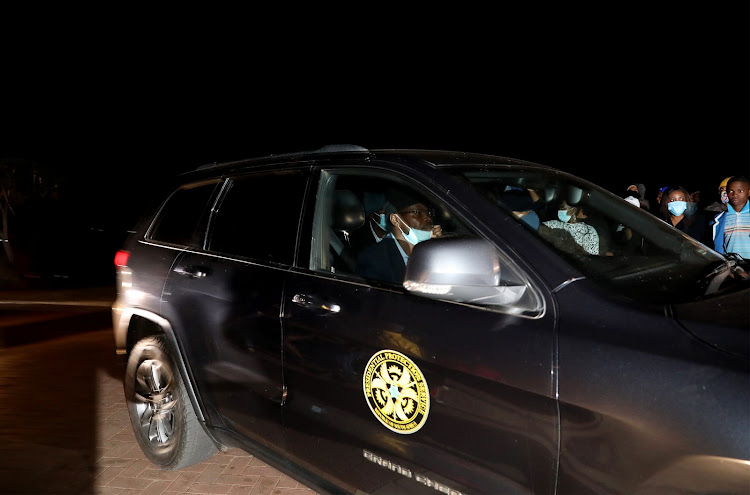 A Presidential Protection Service vehicle leaves Jacob Zuma's homestead in Nkandla before midnight on Wednesday, as the former president handed himself over into police custody. The same convoy drove into the Estcourt prison at around 1.30am on Thursday.
Image: Sandile Ndlovu

At the time of TimesLIVE's call, Khanya, who lives next door to Zuma’s controversial multimillion-rand homestead, was not aware that his brother had decided to backtrack on his earlier decision to not go to jail.

“Please can we talk in the morning. My heart is broken,” he said.

Zuma’s daughter, Dudu Zuma-Sambudla, who has been constantly at her father’s side, tweeted: “Cdes, we celebrate the imprisonment of the freedom fighter Jacob Zuma. Cdes, we celebrate the incarceration of the only man who remained loyal to ANC. Cdes, no retreat, no surrender in fighting WMC and their proxies in our leadership. Amandla.”

Another family member, who asked not to be named, was also shocked at the turn of events.

“Can you imagine, from president to prisoner? It is unbelievable,” said the source, who would only reveal that Zuma is their uncle.

The relative said that an ambulance that had been given access to the property at around 11pm was for Zuma's wife, Sizakela Gertrude Khumalo.

“The ambulance that came in was for MaKhumalo. It came to attend her because when she heard the news [that Zuma was handing herself over] she might have suffered from the shock because she was OK earlier,” the relative said.

He told TimesLIVE that Zuma left the homestead to avoid a police convoy which was already on its way to arrest him.

He said Zuma left “to avoid bloodshed and violence that would occur at the gate”.

Another source close to the family said: “I am not OK, but history will judge SA on what really happened today. We are not politicians so we really don’t know what is going on.”

Zuma’s eldest son, Edward Zuma, who throughout the night had been vowing that his father would not be spending a night in prison, was not immediately available for comment.

On his last day of supposed freedom, former president Jacob Zuma spoke to hundreds of his supporters outside his Nkandla homestead in KwaZulu-Natal. His son Duduzane Zuma and suspended ANC secretary-general Ace Magashule also fired up the crowd with songs and chants. Sunday was Zuma’s final day to hand himself over to police to serve a 15-month prison term for contempt of court.

Police ministry spokesperson Lirandzu Themba said minister Bheki Cele would not be in Nkandla on Wednesday, the deadline by which police were meant ...
News
10 months ago

The police ministry says it will wait for a directive from the Constitutional Court on whether to arrest former president Jacob Zuma.
News
10 months ago