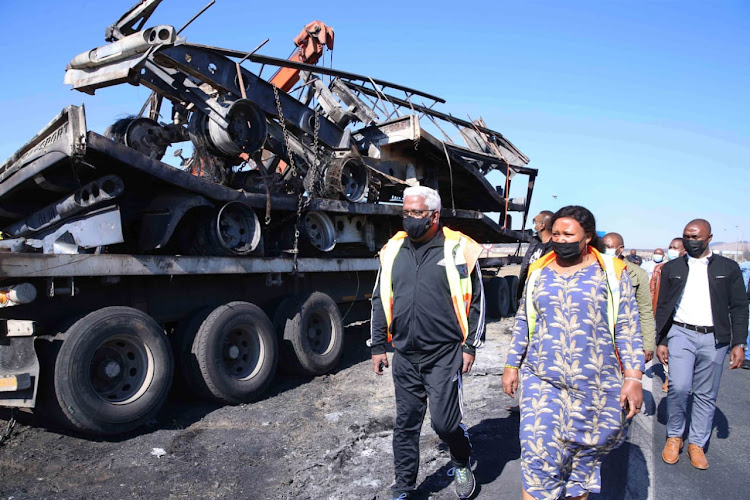 While illegal protests in KwaZulu-Natal continue, law enforcement authorities have warned that they are monitoring the situation and will be taking strong action against those involved.

“Conservative estimates” are that the damage caused to private and public property in the province is about R100m, but this figure could increase as information is still being collated.

With KwaZulu-Natal having two strategic ports, the massive and ongoing disruptions are likely to also have a negative economic impact on other parts of the country.

On Sunday afternoon, the KwaZulu-Natal executive council deployed MECs to monitor the situation on the ground and appealed for calm.

The protest action, themed #FreeJacobZuma and #KZNShutdown on social media, saw violence erupting across the province on Friday. Mooi River, Mtubatuba, Empangeni, Stanger, Mandeni, parts of Durban and Umgababa, south of Durban, were affected. The protests continued over the weekend, and included incidents of looting.

At least 28 trucks were torched at Mooi River Toll Plaza, while six shops were looted in the town.

On Saturday afternoon, cleaning operations were still under way on the N3 a few metres away from the Mooi River Toll Plaza. The unrest flared again on Sunday.

“We have noted various social media posts and messages indicating an intention by some to intensify these illegal protests from this evening leading to tomorrow.  We want to assure the citizens of the province that the police are closely monitoring the situation and will not hesitate to act against anyone found to be breaking the law,” was the warning issued in a joint statement by KwaZulu-Natal premier Sihle Zikalala, community safety MEC Neliswa Peggy Nkonyeni, and economic development MEC Ravi Pillay.

Nkonyeni and Pillay went out on Sunday to assess the situation at Mooi River after the violent protests.

KwaZulu-Natal paramedics from the VIP medical services had to alter their route on Friday when a group of protesters believed to be part of the “Free ...
News
10 months ago

“To-date a total of 37 trucks have been torched in various parts of the province (28 were torched in Mooi River; six on the N2 in Zululand; one in Umgababa; one in Lidgetton; and one on the R603).

“We commend law enforcement agencies for the work done so far. No less than 37 people have been arrested in the province for activities related to the protests and charges against these individuals range from malicious damage to property, public violence, business burglary to the contravention of the Disaster Management Act regulations,” the leaders said.

They said a multipronged response plan was being implemented by law enforcement agencies. This included maintaining high police visibility in hotspot areas, engaging with affected businesses and transport bodies and engagements aimed at stabilising the situation on the ground along with constant reviews to determine any developing needs for reinforcements.

The KwaZulu-Natal executive council condemned the closure of main roads, looting of businesses and damage to private and public property and appealed for calm.

“The blocking of major economic arterial routes like the N3, the N2 and access to ports, the looting of shops and torching of trucks have resulted in the disruption of economic activity,” the committee stated.

Five people were injured when a vehicle rolled on the N2 highway near Mandeni in KwaZulu-Natal after the driver swerved to avoid debris left on the ...
News
10 months ago

The ANC has called on party leaders in KwaZulu-Natal and national executive committee  deployees to stem violence during protests over the ...
Politics
10 months ago