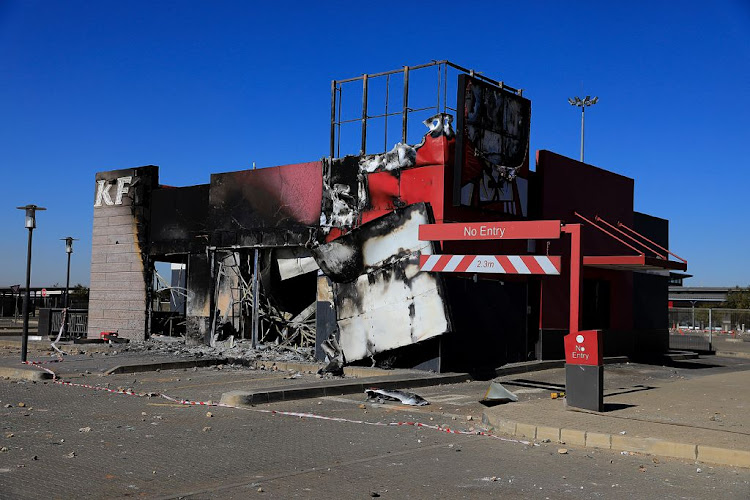 A KFC outlet in Daveyton on the East Rand was gutted in rampant looting and rioting in Gauteng.
Image: Alon Skuy

Acting minister in the presidency Khumbudzo Ntshavheni says the government has established the motive behind the ongoing riots and unrest in parts of the country - and says it is "economic sabotage".

Addressing the media on Wednesday, Ntshavheni revealed that those behind the sabotage had been identified and criminal proceedings instituted against them.

"What I can confirm is that it is economic sabotage. But we are not at liberty to announce who is behind it because, if we do that, we will jeopardise the investigation and successful prosecution of the cases."

On Monday, President Cyril Ramaphosa authorised the deployment of 2,500 soldiers to help other law-enforcement officials quell the unrest.

"Law-enforcement officials supported by the military are working tirelessly to ensure that the country returns to peace and stability and that those responsible for the instability are quickly brought to book," she said.

Ntshaveni said the government had since doubled the number of SANDF personnel in various parts of the country. The move had already borne fruit as fewer incidents of lootings and violence had been reported.

"As the situations stands, there are 208 incidents across the country that have been reported overnight. In Gauteng, the number is 52 and in KZN 56, where shopping malls and centres have been looted and vandalised," she said.

The violence and looting sprees that ripped through KwaZulu-Natal and Gauteng - with minor incidents in the Northern Cape and Mpumalanga - led to the deaths of more than 72 civilians, as of Tuesday night.

Ntshavheni said the figure had increased and that police were still verifying the new death toll.

More than 500 stores have been looted and burnt to the ground. Ntshavheni said investment in the country would certainly be affected but government was confident in its ability to rebuild the economy.

On food security concerns, Ntshavheni moved to assure the country that the government "would never allow a situation in which food ran out".

On reports of petrol stations running out of fuel following the temporary closure of South African Petroleum Refineries (Sapref) as a result of the violence, Ntshavheni said the government had since issued an instruction not to allow the sale of petrol for "nefarious" means.

"We urge members of the public to remain calm and exercise restraint in these trying ties. Government is working with the consumer goods council to ensure food security.

"I must indicate that minister Gwede Mantashe has issued a directive to stop the sale of fuel in portable containers to avoid the use of fuel for nefarious means, but also military are guarding critical infrastructure to make sure that there is no threat to the fuel pipelines," she said.

While community members had taken a stand to protect what remained in their communities, Ntshavheni said there were concerns that Covid-19 could spread rapidly.

This was despite the deployment of various ministers and officials in the affected areas to engage members of the community and the government's decision to lift the total ban on large gatherings, to quell the unrest.

Sasria has given assurance that it will be able to provide for the expected claims.
News
11 months ago

WATCH | Death, destruction & looting: How did SA get here over seven days?

SA is experiencing what President Cyril Ramaphosa describes as the worst violence we have seen in our democracy, as parts of Gauteng and KZN have ...
News
11 months ago