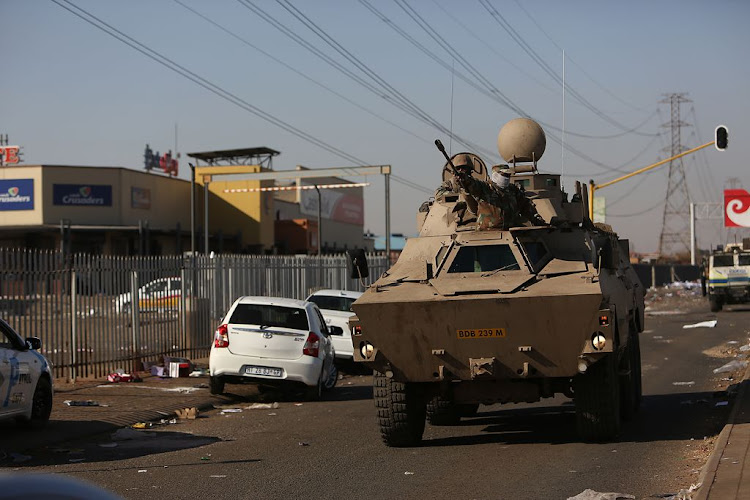 Leaders of political parties have urged President Cyril Ramaphosa to deploy more soldiers as reinforcement to areas of Gauteng and KwaZulu-Natal plagued by public violence and rampant looting since the weekend.

The party bosses represented in the National Assembly made their proposals to Ramaphosa during a virtual meeting he convened on Wednesday to discuss measures to stem the violence sparked initially by last week's incarceration of former president Jacob Zuma.

The meeting was attended by all major political parties such as the ANC, the DA, the IFP, the UDM, the FF Plus and other smaller parties — but was snubbed by the EFF.

In a statement, Ramaphosa's office said the leaders of political parties called on the government to reopen major routes in KwaZulu-Natal, including the main N3 and the N2 highways, to avoid an imminent shortage of food. They also called on his government to protect the secured supply of other goods, such as fuel and medical supplies, after road blockades by those looting and rioting.

Ramaphosa, according to his acting spokesperson Tyrone Seale, told the meeting that their proposals would be seriously considered.

“Leaders urged that major transport routes be secured by to allow fuel, food, medical supplies and other necessities to reach communities and that the 9pm-4am curfew be strictly enforced,” said Seale.

A 13-year-old boy was shot and killed as members of the Katlehong People's Taxi Association have taken it upon themselves to protect malls around their communities. According to members, a group of 500 taxi drivers have mobilised to defend malls in the area.

Malema snubs Ramaphosa's meeting on riots and looting, says ANC must solve its own problems

'I don't participate in rubbish,' says Julius Malema as he snubs Ramaphosa meeting on violence and looting.
Politics
11 months ago

According to Seale, Ramaphosa told the party leaders that it was indeed true that the country could soon feel the affect of the riots  and looting, which may hurt the supply of goods and services across many sectors of the economy.

“The president cautioned that several areas of the country may soon be running short of basic provisions after the extensive disruption of food, fuel and medicine supply chains.”

The government on Monday deployed soldiers to reinforce the overwhelmed police in the looting hotspots. There have, however, been complaints that the soldiers were not visible, especially in KZN where looting continues. Political leaders have told Ramaphosa that there was a need to deploy more of the army.

“President Ramaphosa welcomed proposals made by political leaders and said expanded deployment of the defence force was being addressed.”

The parties agreed that what was happening was an attack on the “democratic order” which required an all hands on deck approach.

It was also clear in the meeting that poverty and unemployment has contributed massively to the looting, Seale said.

“However, leaders said current conditions called for an immediate restoration of calm and order in communities, enabled by expanded deployment of the defence force as a deterrent to violence and other forms of lawlessness.”

The government has lifted the total ban on gatherings with immediate effect.
News
11 months ago

Mashaba vows to take Ramaphosa, Cele to court over looting and deaths

ActionSA is pursuing a 'groundbreaking' lawsuit to hold the government to account for looting and violence in SA.
Politics
11 months ago

Violent looting is a serious threat and cannot be sugar-coated, says Maimane

“We cannot afford to decline into lawlessness and violence or to be divided on lines of race or tribe. This will take us nowhere and simply flame ...
Politics
11 months ago

The DA says it will lay a complaint of incitement of violence against EFF leader Julius Malema and former president Jacob Zuma's children, Duduzane ...
Politics
11 months ago