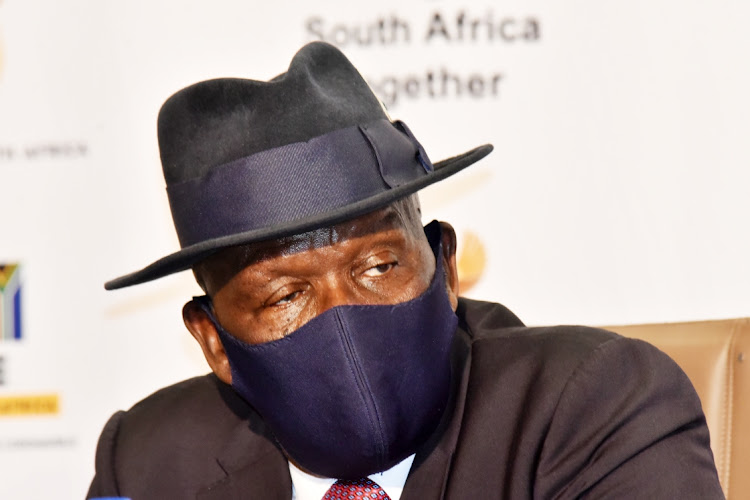 Police minister Bheki Cele is adamant he did not receive intelligence reports about planned unrest in the country.
Image: Freddy Mavunda

Police minister Bheki Cele has denied receiving intelligence before the violent uprisings in parts of KwaZulu-Natal and Gauteng last week.

This contradicts repeated assertions by his state security colleague Ayanda Dlodlo, who told journalists last week that intelligence structures had been hard at work feeding the police information for them to respond to planned events that formed part of the unrest.

The violence, which started in KwaZulu-Natal and spread north, was triggered by the recent imprisonment of former president Jacob Zuma.

Cele told a meeting of parliament’s joint standing committee on defence and the portfolio committee on police that it was not a matter of him not seeing “the product” — as he referred to gathered intelligence information — but that when such information was shared with the police, he would have been the one to sign for it.

He said he would have been the recipient of such intelligence as it was shared at ministerial level. One ministry, he said, would send it directly to another ministry, and only then would the police minister call his director-general (DG) and operatives to inform them of the information.

'Not supported by facts': Presidency hits back at defence minister's insurrection denial

There is no truth to any suggestion that the recent violence and riot in parts of SA were anything less than an insurgency, the presidency said on ...
Politics
10 months ago

An emphatic Cele told MPs on Tuesday: “It’s not that I have never seen that product. These products you sign for when you receive them. You sign. When you receive the product of state security, you sign. You go and check my signature there.”

He said this was how things were done previously.

Cele said Dlodlo “would have given the product to me because the state security minister could not give the product direct to the DG.

“It would have to come via me and I would give it to the national police commissioner. I want to repeat here, I have never seen that product.”

Dlodlo was not part of the meeting.

Cele was responding to a question from FF Plus leader Pieter Groenewald, who had asked why he ignored intelligence supplied to him and why police crime intelligence did not act.

The police minister said unless it was intelligence that crossed SA borders, crime intelligence did not deal with state issues and dealt with crimes like cash-in-transit heists and house break-ins. They would, at times, follow up on information from state security when shared with them.

Last week Dlodlo told the media in Cele’s presence that if the intelligence structures had not been working, the country would have seen significantly worse violence and destruction.

“From inception, before the violence flared up, between the police service and state security, we were sharing information. From day one when everything started, we did share information with the police,” said Dlodlo.

Dlodlo’s spokesperson Mava Scott declined to comment on the matter.

The instigators of the violent insurgence that brought destruction in KwaZulu-Natal and Gauteng intended targeting more key infrastructure, including ...
News
10 months ago

On Monday the police recovered thousands of rand worth of items stolen from warehouses and retail stores in Durban during widespread looting in KZN ...
News
10 months ago

Bravo, SA heroes, but be watchful because it’s not over until the instigators who feel zero for the poor are booked
Opinion & Analysis
10 months ago