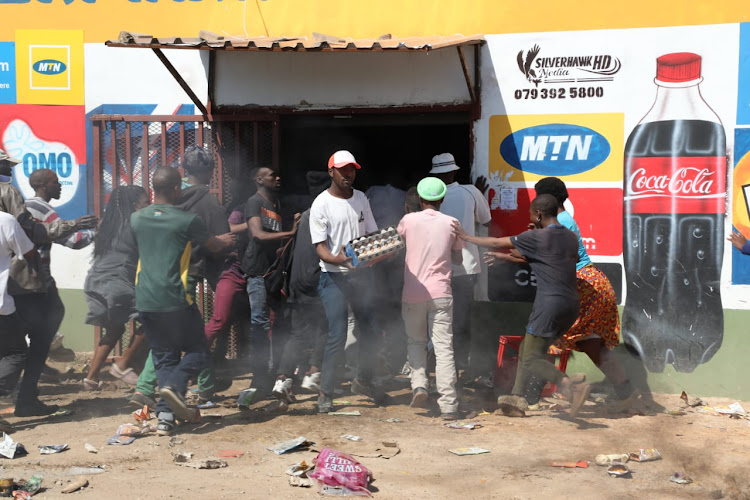 Acting minister in the presidency Khumbudzo Ntshavheni has defended the decision to destroy goods recovered from last week's looting sprees in Gauteng and KwaZulu-Natal.

This following a public backlash after the government announced on Tuesday that recovered looted goods would be destroyed.

The public reacted with anger, saying it was senseless to deploy the army — which has been kicking doors in areas close to looted shopping malls to recover stolen goods — only for those to be destroyed.

Some argued that the recovered goods could have been donated to the indigent who were not party to the looting, or auctioned and the proceeds donated to affected small businesses.

But Ntshavheni said the looted goods were no different to counterfeit goods, which are also always destroyed when found.

This was because, should the looted goods be left in the ownership of the looters or sold at a giveaway price or donated, it would have devastating economic implications to the manufacturers of the looted products and have revenue-collection consequences to the country.

“Our people do not understand the things that affect the economy. The stolen goods are no different from counterfeit products and that is why we destroy them,” said Ntshavheni.

“If the goods are stolen, it means the manufacturers of those goods are not going to generate an income from them that enables them to pay employees and continue with their businesses.

“That money is also lost to the tax department because nobody is going to pay tax from auctioned or donated looted goods.

“When stolen goods are destroyed, you are making sure the manufacturers can make replacement products and make them available in the market. The country benefits in terms of tax and companies continue to operate and pay salaries for their workers. That is basic economics,” she said.

The violent protests and looting that broke out in the wake of former president Jacob Zuma's incarceration has cost the KwaZulu-Natal economy R20bn.
Politics
9 months ago

Parliament is further expected to summons security cluster ministers to account for intelligence failures during the looting spree and perceived ...
Politics
9 months ago

Zandile Gumede has denied having any involvement in the recent destruction and looting in KwaZulu-Natal and Gauteng.
Politics
9 months ago

Former president Jacob Zuma's son Duduzane came under fire last week for telling protesters and looters to do so "carefully and responsibly".
News
9 months ago

Acting minister in the presidency Khumbudzo Ntshavheni will give an update on government interventions to rebuild the economy and address various ...
Politics
9 months ago

On Monday the police recovered thousands of rand worth of items stolen from warehouses and retail stores in Durban during widespread looting in KZN ...
News
9 months ago