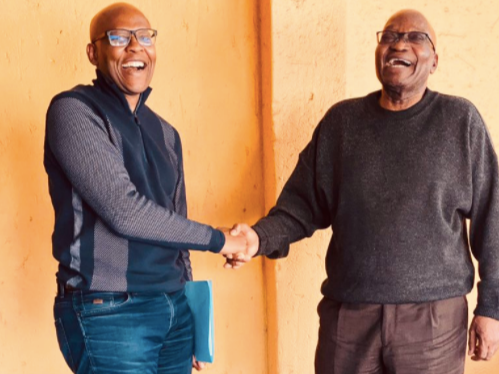 Jacob Zuma’s spokesperson Mzwanele Manyi has shed some light on the former president's condition in prison, saying he is “having serious issues" there.

Zuma is serving a 15-month jail sentence for contempt of court at the Estcourt Correctional Centre in KwaZulu-Natal. He was handed the sentence by the ConCourt last month after failing to appear at the state capture inquiry.

Speaking on eNCA on Tuesday, Manyi said Zuma was struggling with his physical wellbeing because of his age.

“[Former] president Zuma is a man with a very strong heart, but the prison conditions are never good for a person that is approaching his 80th birthday ... he is having very serious issues,” said Manyi.

He said people have been friendly to Zuma, but prison was taking a toll on him psychologically.

“We cannot complain about the treatment [he is receiving] in the cells. People are friendly to him, but the psychological impact is taking a toll on him. So this is not a happy situation.

“There is nowhere of trying to paint it nice. It's just not a happy situation because he is sitting there with a heavy heart and his health is not enhanced by conditions the government has put him in,” he said.

Are you satisfied with the ConCourt's ruling?

Judge Piet Koen made the order after hearing arguments on Monday from Zuma’s lawyers, who were seeking a postponement for two to three weeks.

On social media, Zuma's daughter Duduzile welcomed the news and shared a video honouring her father.

Congratulations To The Legal Team Of @PresJGZuma For Winning This Application. It’s Hard Hard Represent Someone Who Has Judges Bending Laws And Creating What Is Called “Zuma Laws” For Political Factional Scores. pic.twitter.com/IJsoJDwHLj

It remains to be seen whether former president Jacob Zuma will attend his late brother’s funeral on Thursday, after correctional services confirmed ...
News
10 months ago