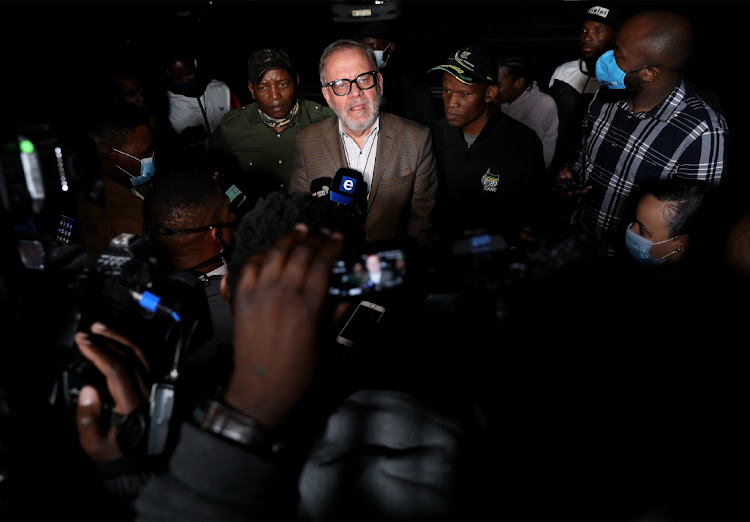 Niehaus on Thursday demanded that Mbalula apologise and retract unconditionally comments he made about him during an appearance on the popular BBC News talk show HARDtalk.

Mbalula was pressed by the show's presenter Stephen Sackur this week on what evidence the SA government had to back up its claims that the recent unrest in Gauteng and KwaZulu-Natal was a “failed insurrection”.

Sackur insisted that such claims had no credibility as the ransacking of malls and burning of retail buildings had no one face or leading faces.

It was at that point that a cornered Mbalula dropped Niehaus's name as being among those that led the offensive.

“Minister, what you are saying to me is extraordinary. You and your boss, the president of the country, seem to be saying that there was an extraordinarily well-planned orchestrated attempt to bring down the democratically elected government and your democratic institutions,” charged Sackur.

Transport minister Fikile Mbalula told the BBC's 'HARDtalk' on Wednesday that the recent unrest was a 'failed insurrection' by plotters who had a ...
Politics
9 months ago

“But surely you cannot say that without clear evidence. If there is no evidence, what credibility does that claim have?”

Mbalula said: “Evidence is overwhelming, there are recordings in a sense that things that they planned to be going to do and they did.”

Sackur interjected, asking: “Who is 'they', minister? It is not clear to me who is the leadership that you appear to be pointing toward.”

“Well, they are faceless ... Those that we know at a political level is Carl Niehaus, who was in the forefront, and some other people around him who were basically in the forefront and calling for the undermining of the rule of law,” replied Mbalula.

Niehaus is demanding Mbalula retract the statement and apologise or face a lawsuit — on top of another defamation claim Niehaus has pending against Mbalula, claiming damages of R8m.

“For Mbalula to say on BBC HARDtalk I was 'in the forefront of undermining the rule of law' in the context of 'insurrection' and 'coup plotting' is extremely slanderous,” tweeted Niehaus before sharing a more detailed video.

“My attorney Mr Eric Mabuza is now preparing an urgent letter that will today go to minister Mbalula. That letter will demand that he must apologise without any holding back for these wild allegations that he made and retract all of them unconditionally.

“I will furthermore approach our courts on an urgent application if he fails to do so and I will sue the pants off him.”

Niehaus said he had never called for public violence in his public speeches in support of jailed former president Jacob Zuma and anyone saying anything to the contrary must prove it.

Supporters of jailed former president Jacob Zuma say they will continue to demonstrate until he is freed.
Politics
10 months ago

‘It’s sad but we warned the ANC’: Carl Niehaus weighs in on fiery protests

'We told you that if you do not take political responsibility, if you want to wash your hands, the consequences will be instability,' said MKMVA ...
Politics
10 months ago

Transport minister Fikile Mbalula has taken a dig at MKMVA spokesperson Carl Niehaus after he vowed to appeal his suspension from the ANC.
Politics
10 months ago