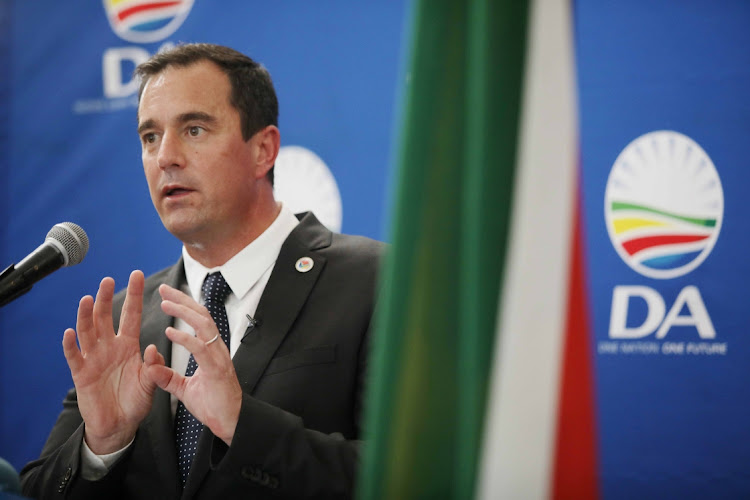 DA leader John Steenhuisen says it is critical South Africans know the who, when and what of a catastrophic failure by the country's security cluster to protect citizens and property. File photo.
Image: Esa Alexander/Sunday Times

The DA wants the government to release a state security intelligence report on the recent violent pro-Jacob Zuma protests and looting in KwaZulu-Natal and Gauteng.

State security minister Ayanda Dlodlo first mentioned the report at a press conference she addressed in the presence of police minister Bheki Cele.

It has since been the subject of controversy after Cele denied receiving the report.

Acting minister in the presidency Khumbudzo Ntshavheni said it would not be in the interest of the government to release the intelligence information it had in the lead-up to the violence and looting.

On Tuesday DA leader John Steenhuisen said the party will file an application in terms of the Promotion of Access to Information Act to access the report.

Good cop? Bad cop? How do we tell them apart?

Fingers are being pointed at police minister Bheki Cele for failing, it is alleged, to sign off the budget to the police's 6,000-strong crime ...
Opinion & Analysis
1 year ago

“It is critical that South Africans know the who, when and what of this catastrophic failure of our security cluster to protect citizens and property. Who knew upfront about the looting and unrest, when did they know it, and what did they do about it?

“These questions apply to all in the security cluster, but specifically to President Cyril Ramaphosa, state security minister Dlodlo, police minister Cele and defence minister Nosiviwe Mapisa-Nqakula,” he said.

Steenhuisen said if Cele received intelligence on the planned looting and failed to act on it, he could be in contravention of the National Strategic Intelligence Act.

“Minister Dlodlo should therefore publicly release the intelligence report(s) which she claims were made available to law enforcement because such reports would likely reveal evidence of a failure to comply with the law by the police. And this would most certainly be in the public interest.

Citizens have the right to access the information they need to hold elected officials accountable for catastrophic failures like the ones our country recently witnessed.

“Furthermore, it is private citizens and business owners who bore the brunt of the attacks. If the intelligence reports reveal they suffered these extensive losses due to a failure by the police to comply with the law, they should have recourse to legal action against Cele and other police officials.”

He slammed Ntshavheni for saying it was not in the interest of the country to make the report public.

“Ours is a constitutional democracy premised on the principles of openness and transparency, where citizens have the right to access the information they need to hold elected officials accountable for catastrophic failures like the ones our country recently witnessed,” said Steenhuisen.

“The DA has long called for a complete overhaul of the oversight mechanisms over our country’s security and intelligence bodies as we have one of the most clandestine systems in the world.

“In the US, for example, the CIA reports regularly and openly in congressional hearings. Most opposition parties elsewhere have full access to security briefings. But here we don’t see financial statements, we have very little insight into budgets and these bodies don’t report to the auditor-general.”

Inside Ramaphosa's security crisis: Why SA did not predict the threat

A major shake-up of the country's security cluster - including the axing of ministers - is on the cards after last week's riots that cost 330 lives ...
News
1 year ago

The ‘arrest’ of South African State Security Agency operatives in Mozambique that has recently come to light, and the subsequent suspension of SSA ...
Opinion & Analysis
1 year ago

Last week's unrest, in which more than 300 people died and billions of rands' worth of damage was done, was in part a direct consequence of SA's ...
Opinion & Analysis
1 year ago