Summing up the looting and unrest that happened in KZN and Gauteng, Jabu Zuma said 'as history shows, when the poor have nothing else to eat, they eat the rich' 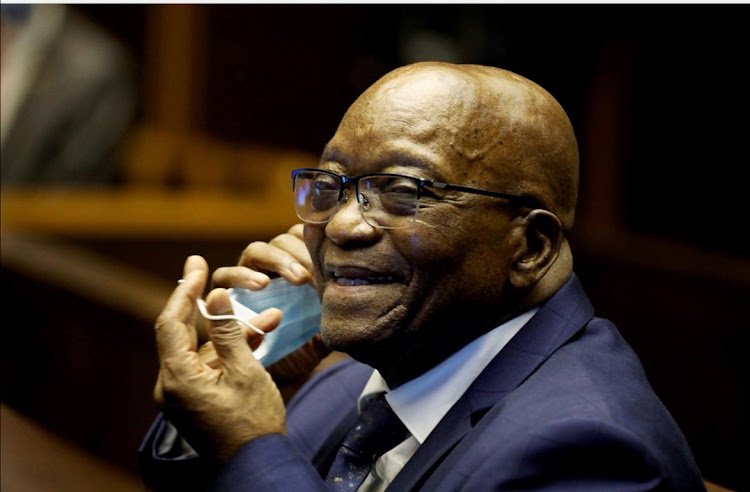 The daughter of former president Jacob Zuma, Jabu, has come out guns blazing against British model Naomi Campbell who blamed Zuma for the recent unrest and looting which erupted after his incarceration.
Image: Sandile Ndlovu

One of former president Jacob Zuma’s children has hit back at British model Naomi Campbell who penned a letter to the jailed former president, pinning the recent turmoil on his defiance to appear before the state capture commission.

In summary, Jabu Zuma told Campbell she was not qualified to speak on Zuma's affairs.

In her open letter posted on Instagram, Campbell had alleged that the recent looting and destruction of scores of businesses in KwaZulu-Natal and Gauteng had threatened to undo what the late former president Nelson Mandela had fought hard to achieve. She blamed this on Zuma.

“Each day you defy the courts and stoke division, you take a step backwards from Madiba’s vision for SA to prosper and for there to not only be equitable political justice but also economic justice,” Campbell wrote.

She said the recent scenes which made global headlines were not the SA that had been exemplary to the rest of the world and called for Zuma to end his defiance.

“I have watched how over the last few years you have protested your innocence at the allegations tabled against you of corruption and allowing mass state capture. I have seen you go out of your way to avoid having to deal with these matters in court and avoid a commission set-up to investigate state capture,” Campbell said.

“You have talked of the rule of law and the SA constitution being something that should apply to everyone. Yet you defied the courts and were sentenced to 15 months in prison. Now upon your incarceration a group of protests under the #FreeZuma banner broke out igniting the worst violence and criminality SA has seen since the end of apartheid. These actions not only saw hundreds lose their lives and property destroyed, but its effects will now be felt by many millions more. This affects the millions of hard-working and peaceful South Africans, many of whom have suffered over the last year because of Covid,” Campbell added.

But Jabu criticised Campbell, suggesting she knew nothing of SA history or the sacrifices made by her father towards SA’s democracy.

The civil unrest is bigger than president Zuma’s arrest.

“What you remember SA to be is not and has never been a reflection of the true SA,” she said in the letter, which was shared by one of the more vocal of Zuma’s children, Duduzile, on her Twitter page.

“If you had actually been watching president Zuma over the last few years as you claim, you will be well aware of the fact that all he has ever called for was a fair trial. He has been more than willing to stand in front of a court and prove his innocence,” Jabu said.

She said many of the delays in Zuma’s court appearances were as a result of the state calling for postponements, except for a few incidents where Zuma missed appearances because of incidents beyond his control.

She denied that her father was evading the state capture commission.

“President Zuma has never had an issue with appearing before the commission, he’s done so previously. His issue lies with having to appear before deputy chief justice Raymond Zondo,” said Jabu, highlighting that the two had a close personal relationship and therefore a conflict of interest existed. Zondo has denied these claims.

So Proud Of My Sister Jabu Zuma For This Powerful Piece “Dear Naomi Campbell” #NaomiCampbell pic.twitter.com/cp4KV1wAhe

She also called for the same vigour to be directed towards all those who had also refused to give evidence to the commission.

On the looting and unrest that followed in the days after Zuma’s incarceration, Jabu said that unrest was beyond her father.

“The civil unrest is bigger than president Zuma’s arrest. South Africans are hungry, impoverished, unemployed and tired of living whereby the government marginalises them. As history shows, when the poor have nothing else to eat they eat the rich,” Jabu added, highlighting what she claimed to be failures of the current government under the leadership of President Cyril Ramaphosa.

Jabu said Campbell was in no position to share her views on Zuma’s vision and his part in the struggle for democracy.

“You’re simply not qualified and must be deluded to think you could ever (make recommendations on what Zuma should do),” Jabu concluded.

Do you agree with Naomi's open letter?

Mzwanele Manyi: ‘This country has always been captured, from day one’

The Jacob Zuma Foundation has been at the forefront of defending the former president in the face of his duel with the courts and his ultimate ...
Opinion & Analysis
9 months ago

The family of former president Jacob Zuma is demanding that the state release him from the Estcourt Correctional Centre.
Politics
9 months ago

'She will have to explain her tweets': ANC to hold Zuma's daughter accountable for Twitter posts